Ode to my Second Boyfriend

When I was way too young, I had a boyfriend, we'll call him "Scott." We dated for two years, from the time I was 14 until 16, at which point I dropped him like a well-built, soccer-playing, Nirvana-loving sack of bricks. I can't remember why right now, but he was NOT happy about it. In fact, I'm pretty sure I'll always be The One That Got Away, which is pretty awesome for my ego. High Five!

Coming out of my first major relationship, I met this dark, emo guy at an arts & crafts show (what? What teenagers don't hang out at arts & crafts shows?) We'll call him "Colin." We didn't last very long, he was actually kind of a dick to me, but after he found me about 13 years later on Facebook, he apologized. Apologies go a long way with me.

When Colin found out that I'd separated from my husband, about a year or so after we'd e-reconnected, he immediately called dibs on me - whatever that means. He had a girlfriend at the time, and I was still very man-shy, so I wrote it off as a joke.

A month or so later, my friend Jessica was in town and we were wine tasting on my birthday. I got a message from Colin to call him, so of course I did, given the facts that I was super drunk, and Jessica was wandering around, ignoring me, taking pictures of everything like a tourist. 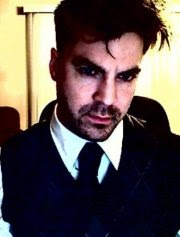 Yes, Colin was my boyfriend after the TWO most significant relationships in my life. And this time he was older, wiser, funnier, had a reliable job and car, and had abs that I could see the definition of on a fuzzy cell phone photo.

Over the next two months or so, Colin and I exchanged about 25,000 texts, pictures, phone calls and emails. When I woke up each day I'd be greeted with something like "Good morning Sunshine Face!!!" and the texts would go on like that all day and into the night. I would come home to find packages at my doorstep - weird little gifts that he would send out of the blue - a Snuggie, llama slippers, the game Canoodle, a leaf blower. Yes, a leaf blower. I fell deeply and madly in love with him after that one. I'm not kidding.

The main problem with our relationship was that Colin lived really far away. As in, somewhere in the middle of the country. So technically, he was only my e-boyfriend. And I hearted him. And then he dumped me. For another woman.

If you think that being dumped by your husband of 10 years for another woman sucks, try then being dumped by your e-boyfriend of 2 months, for the same reason. This was his excuse: he went to some party, he looked SUPER hot (yes, photos were exchanged all day, every day, so I know that he was on fire that night), he ran into his ex-girlfriend (who had cheated on him while he was out of town, thus causing the breakup in the first place), she gave him some bullshit story that he fell for, and viola! I was single again.

It took a while to nurse the wounds from this, and to come to terms with the fact that no matter how cool a guy finds me, there will probably always be someone better than me out there. And he will find her. And he will dump me for her. But that's cool, I'm fine now. Ahahahaha, I'm fine! I'm fine!

I deleted all of the pictures he'd sent me, all of the texts (though now I wish I had them to use here, they were really creative and heart-warming and funny and - I'm fine! I'm fine!) I sent back all of the gifts (well, I let my son keep the llama slippers). I cried unreasonably. I got over it.

So now we're friends again, and he's still with this girlfriend-that-cheated-on-him-while-he-was-out-of-town. Now he's out of town again. Recently, over a matter of two days, we went from him desperately asking for my opinion on whether I think his girlfriend is sleeping with someone else based on a picture he saw on Facebook, to him buying her a house. Yes, I said Buying Her A House. It seems as though his girlfriend wants this house. And she can't afford it. And so she thinks they should buy it, "together." The last time I checked in, he said he needed to give her power of attorney since he's in another country and can't be there to sign the papers. To buy this house. That he's only seen pictures of. With the woman he thought was cheating on him a week before.

Can someone please explain to me why the full-package guys end up with the crazies? I mean, obviously he, too, has lost his mind, but seriously. I'm baffled. I'm also so glad that we didn't end up together. I mean, puh, who wants a boyfriend that loves you so much he'll buy you a fucking house? Am I right? Ladies?

Email ThisBlogThis!Share to TwitterShare to FacebookShare to Pinterest
Labels: Ex-Boyfriend