My daughter is a huge fan of creating contests, giving elaborate orders to those around her, and making dinner plans on our behalf. So it didn't come as much of a surprise when, while making dinner the other night, Evie declared that Paulie and I were to have a very serious salad making competition the following night. "Why salad?" I asked. I assumed it was because I was at that very moment making a salad, so she was just going with a visual impulse. Instead she said "for a contest, and for health. So we can have both."

I am in general not a very competitive person (read: this is something said by people who don't realize just how competitive they actually are), so I forgot about our contest until about 3 minutes before I was due to leave work for home. I hadn't planned out my salad yet, but I figured, no big deal, right?

It soon became clear, however, that Paulie was taking this thing seriously.

As soon as he walked in the door, he took on a warrior's stance and declared that no children be allowed into the kitchen during the preparing of the salads, lest they choose the winner based on favoritism alone. With kids sufficiently banished, we set to work.

I decided to make a 'know your audience' salad, with a couple of things thrown in that the kids don't like so it wouldn't seem like blatant suck-upery. While I was steaming my green beans, Paulie disappeared for a while. When he came back, I wasn't too worried:

Then when I went to the sink to rinse my tomatoes, I caught sight of this pile of stuff:

I mean, the guy plans on putting flowers into his salad?! Come on - totally cheating. But hey, I knew I could still pull it together. I rolled my shoulders back and opened a can of black olives: my secret weapon. Around this time, Evie bumped her way into the kitchen with her eyes squeezed shut, and dropped this reminder onto the table:

She's kind of a task-master.

Since I am a very good rule-follower I took her instructions super seriously. Every time Paulie looked over to my work station and asked "oh, are you putting those sliced almonds in your salad?" or "are you using that feta?" I was like "BACK OFF, BITCH! All of these things are miiiiiiine!" Eventually I let my guard down enough to glance over my shoulder, and I saw that Paulie was beginning to plate his salads.

Needless to say, I was not encouraged. Evie loves avocado! Maybe that was his secret weapon? The bastard! *Deep Breath* I knew I had to stay focused...head in the game, Janik, head in the game. I tossed my salad together and thought it looked pretty damn good. 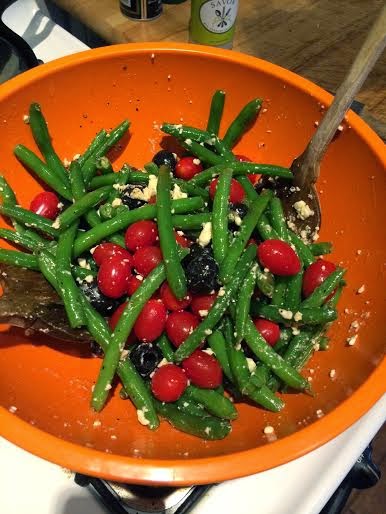 Then, I made the rookie mistake of checking in to see what was happening over at Paulie's work station.

Oh, really? Yeah. Okay. I see how this is gonna go down. Resigned to failure, I begrudgingly plated my own salad, then we set the table and called the kids in to judge the fruits and vegetables of our labor. It didn't take long before my frown...turned upside down.

Yep - the kids hated Paulie's salad! Woo hooooooooo!!! Sure, they liked mine only slightly more than his and still didn't want to eat the majority of it, but still. All that counts here is WINNING, amiright?

As soon as Jonah had eaten a respectable amount of each salad, he said "so, um...where's...dinner?" Imagine his immense disappointment when I pulled the broccoli and cauliflower gratin out of the oven! Oh man, he was super bummed, heh heh. Luckily we had a bag of 'I'm sure these things don't expire even though the sell-by date was six months ago' frozen pork sausage patties in the freezer, which both kids fell upon like a pack of wild dogs after a long winter.

While they ate, Paulie plotted our rematch. The next competition, much to both kids' delight, will be a Steak-Off. Since I basically never even eat steak and have no freaking idea how to cook it am a thoughtful and giving girlfriend and don't want to hurt my boyfriend's pride, I think I'll let him win that one.

No guarantees, though.
Posted by Amanda Janik 4 comments: