Finn is a Butt

Finn would be getting a lump of coal in his stocking this year but I know he'll just draw on the living room wall with it, flush it down the toilet, and then pee on the bathroom rug.

I haven't blogged about the boys in a long time because every time I sit down and think to myself "what are they up to these days that's worth mentioning?" I get an instant stabbing sensation behind my left eye.

Of course we have our fun, and I love my boys more than ever, but if I had to sum up this chapter of our lives I'd say that Finn is continuing to aggressively "test boundaries" and Liam is making progress, but is still struggling with language. I just felt a hair turn grey.

I don't have a single gripe about Liam. He's as sweet and funny as ever, and he's made more progress in the last month or two with his language issues than I've seen him make in the past two years. It brings me to happy tears. Jodee wrote beautifully about it on her blog HERE. The hard part is we're not sure now what path his education should take. Erin and I have been observing classes and meeting with teachers to try and figure out what's the next best move. They think he's in the right program, but Erin and I think he's ready to advance. As anyone who has tried to fight for their child's educational needs can tell you, it's an epic battle.

Finn, on the other hand, is mega-gripeworthy. His potty-training went out the window for about a month. As soon as he discovered how pleased we were to see him use the toilet, he added that skill to the list of things he will absolutely never do again. He now holds it until he's in agony, or until he's in the bath and we're not watching so that he can hop out, take a piss on the bathroom rug, and hop back in the tub. We've tricked him a number of times into using the potty, but he's peed on the rug as many times as not. Pooping he saves for the moment we're forced to put him in a diaper. Typically it'll be his nighttime diaper or any occasion when we have to leave the house for an extended period of time. Once he's in it, he runs off to hide so he can unleash in privacy.


His other major power move is the "limp noodle". It's brilliant. You know the move: it's the one where the slightest disinclination to do something results in instantaneous full-body immobility.


I used to be able to call his bluff by simply walking away, but Liam has ruined that. Liam gets very upset when I appear to be leaving his only brother and best friend behind. Consequently, on the days Finn doesn't feel like going to school, he gets carried the whole way. 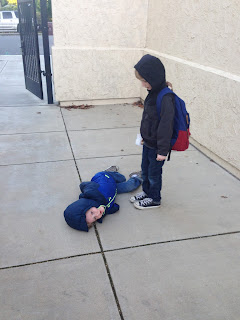