Apparently Mike and I met in 2002, but I was kinda drunk while interviewing him for some job that he was overqualified and far too funny for, so I don't remember that detail. Eventually we both worked in the wine industry, and I would run into he and his Then-Girlfriend/Now-Wife Erin at winery parties, where they would encourage and not at all judge my wine-drinking while with child. I, in turn, did not judge Erin for marrying a total fag*. Since we first met, Mike has remained super-tall, has remained in the wine industry (and makes some kick-ass hooch in his garage), has carried the elite title of Mr. Healdsburg, sired two kids, constantly fishes for compliments and praise due to his terribly low self-esteem, and has tried to get in my pants, like, at least six times. He has also, unlike me, managed to remain married to his beautiful wife, despite being a total man-whore*. 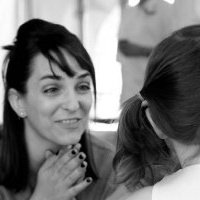 In 2002 Amanda interviewed me for a serving position at a crappy restaurant called Felix & Louie’s.  I didn’t get the job.  Two years later she threw me a surprise birthday party at her house.  I’m not sure what happened in the intervening two years (mainly due to heavy drinking) but a friendship evidently blossomed.  Like me she has two kids that rule, but unlike me her marriage was a complete and total failure*.  She’s like a funnier Tina Fey and totally hot but I’ve never gone there because she’s kind of a slut….and I’m still married*.

*We wrote these in 2011 before Mike's marriage failed like mine. Serves him right for being a smug bastard - Love, Amanda