Finley was just fine yesterday. Hurling to a 4-year-old is what sneezing is to an adult; an efficient way to expel something irritating.

It's like their bodies are small countries with really xenophobic policies regarding immigration. If anything mildly exotic enters them it's immediately extradited. "You say you're a 'snow pea' eh? Nope. Don't like the sound of that. Out you go! No, not that way, back the way you came!"

So today was the second day of school, but Finley's first. He started "Transitional Kindergarten" today, which is reserved for kids born in the Fall who are a little too young for Kindergarten and a little too old for Preschool. Like Liam, Finley has been in special education up until now, and today marks his first day of mainstream education. Also like Liam, Finn has an aide, and as luck would have it, it's Liam's old teacher's aide Lupe. Liam pronounces it "Loopy". Loopy and Liam were total besties. I couldn't happier.

Finn was a little nervous at the drop off. As soon as he got out of the car his hood went up and his eyes went shifty.


This happened on his first day of summer camp and ended with him screaming pitiably while I fled the scene. When we got to his room I tried to be the comforting daddy, willing to stick around for a bit if the transition wasn't going well. I went in for a hug and he basically told me to beat it.


So I left. I wanted it to go easy, but not that easy.

I was sitting on the front porch, sipping coffee, anxiously awaiting the boys' arrival. I would never miss a first day. Earlier that morning I reflected back to the beginning of the summer. I mentioned to Jodee, "it seems like just yesterday I was blubbering after dropping the boys off at summer camp." Without exception, I've cried like a baby on every first day, whether it was the first day of school, day care, summer camp, what have you. I told Jodee today's mantra was "Keep it Together". She rolled her eyes. She figured I was doomed.

When my phone rang and I saw it was Erin, I incorrectly guessed she was just running late and wanted to meet me at the school rather than at my house. I only live a couple of blocks from Healdsburg Elementary, and I wanted to walk the boys to school their first day so that I could really let it all sink in. Jodee was right, I was doomed.

The news that Finn had just had, what the world of competitive eating politely refers to as "a reversal of fortune", was hardly surprising for some reason. Of course Finn puked on his first day of school, because Finn.

I downed the rest of my coffee and jumped in the car. Erin was going to stay home with Finn so I had 20 minutes to make the 40 minute round trip drive to retrieve Liam. When I got there Finn was surprisingly chipper and happy, until he realized Liam and I were going to school without him. Hopefully that means it was a one-and-done episode. 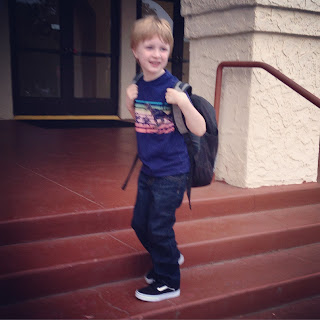 The first day outfit is critical. You want to look cool, but you don't want it to look like you're trying really hard to look cool. Mom nailed it.

Showing up to the first day of school 20 minutes late is actually kind of ideal, as long as you have a rock solid excuse to deflect the judgemental vibes you're going to get from the admin office. Rather than tossing Liam headlong into the fury, we got to take is slow. It was nice and quiet, and I didn't have to shout over the turmoil when explaining to Liam where we were going and what he could expect. He strode through the place excited and confident and when we got to his classroom his face got a little scrunchy, but he didn't do his usual pill bug impersonation.

The moment we cross the threshold into a new classroom is usually the moment I need to be talked down off the ledge. Liam has been attending special education classes his whole academic life, and please forgive me if this offends anyone, but the first day in a special ed class can look more like an asylum than a classroom. Leaving your child in a room like that can sometimes require a person to ignore every parental instinct in your body. In my limited experience, it's pretty heart-wrenching.

But this year Liam is going full mainstream first grade. Last year we'd had it, and while it's a long story, in a nutshell we had to convince the school that Liam's poor performance had more to do with his being bored than anything else, and it was time to challenge him. It took a handful of lawyers to get the point across, but they tested it out by putting him in a regular class with an aide for a couple of months at the end of the school year, and he thrived. Trust your instincts parents. No one knows your kids better than you do.

Walking into Liam's new classroom, this time, was like crossing over into paradise. I swear the room glowed. Everything was sunshine, rainbows, and lollipops. About twenty or so fidgety kids were sitting in their assigned seats, looking deceptively angelic. My entrance elicited the usual gasp I get every time I enter a room full of children, but a few of the kids whispered "Liam!"  My heart swelled. He put his backpack in the appropriate place and his new aide, whose name I committed to memory for a full eight seconds, showed him to his seat. I stole a quick smooch (from Liam), made my exit, and did not cry a single tear until about five minutes into typing this blog.
Posted by Unknown No comments: