Liam is, as of last week, out of special education and in mainstream Kindergarten.

I could go on for days about what it's been like leading up to this, how much sleep was lost, battles fought, hopes wavered, hearts broken, tears shed, and so on, but BAH!! How about we just talk about ice cream.

So CLEARLY, with this achievement, Liam has earned himself ice cream forever. He, Finn, and I headed out Sunday night after dinner. I'd devised a route from our house to Nobel Folk Ice Cream & Pie Bar that takes us along the longest blocks because they afford me a little extra time to sprint and catch up to Finn before he can launch himself into traffic. While Liam has made all of my hopes and dreams come true, Finn is still a bit of an asshole.

To Finn, there is no greater form of comedy than forcing others to save him from mortal peril. My shouts of "FINN STOP!!!" in my burliest dad voice are always answered with belly laughs. Once we get downtown, the blocks aren't as long, so I can't let him loose for a second. Instead, he gets the death-grip hand hold which makes his knees stop working.

I knew it was going to get pretty ugly. It always does. Lately any errand I run with the boys ends up looking like a kidnapping, but it wasn't like I was going to bump into some rock-star I'd idolized when I was a teenager or anything.

We managed well enough until we were only two blocks away from Noble Folk. Then, Finn started in on a sort of "suicidal contortionist" performance piece that pushed me to my wit's end and I shouted "FINE! If you won't hold my hand when we cross the street then we'll just have to go HOME!!"

Finn's bullshit detector is keen, so he called my bluff and started back for home. I doubled down and pretended I wasn't going to follow him.


I eventually caught up to him in the bulk food isle of our local grocery store.

Liam was on my tail and quick to remind me that ice cream was the other direction, so Finn got to ride the rest of the way over daddy's shoulder, which was fine with him since he was exhausted from laughing maniacally.

I'd love to say it was smooth sailing after that, but Finn felt the best nightcap was a visit to the toy store, so he staged a sit-in. 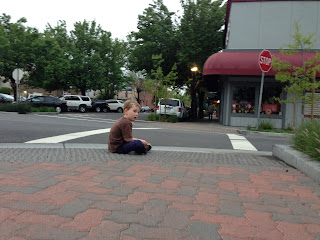 My argument that it was closed wasn't cutting it, so we crossed the street and I let him wail on the locked door. Fortunately it didn't set off any alarms. Unfortunately, Finn's renewed rage meant it was time to sprint to the very busy street down the block. Liam and I managed to pin him down at the corner, in full view of the weekend dining crowd that wasn't sure whether or not to call the police.

I glanced up with my best "Ha! Everything is okay. No really," and there was Les Claypool of Primus, the lead singer of a band I went to see five times between 1992 and 1993.