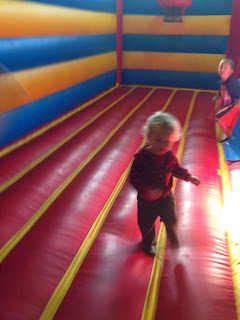 The holiday season has begun! Liam had no school Monday so we went to Pump it Up. I've written about this place before, but it had been a while since we'd been there. In a nutshell it's a giant inflatable bouncy house/gladiator arena of death. The place is often rented out for private parties but Monday through Friday they have "drop ins" from 10:00 to 11:30 and we had yet to have made it the full hour and a half. We came close this time though. 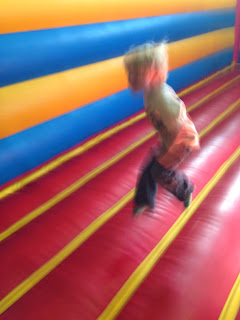 There are a few things I have to re-learn every time we go there, mostly to do with physics. It's $7 a head for the kids but adults are free because they encourage parents to get in the inflated playgrounds and keep their own children from bludgeoning themselves and others. They also let the parents play in there a bit, which I love, but it means I have to go in with a heightened level of self-awareness. I can be a bit of a "Lenny" and it's a compounded problem when it's not just my kids that are in danger.

In tenuous situations like these, when I have to move, I try to time it carefully because the energy transference from a 225lb man, through a big inflatable castle, and into the descending feet of four preschoolers landing at the same time, is remarkable. It reminds me of the experiment where you drop a basketball with a tennis ball on top of it.

To make it easy I mainly just hold still with my arms at my sides, but that's problematic too. I end up creating a sort of black hole into which children are drawn. 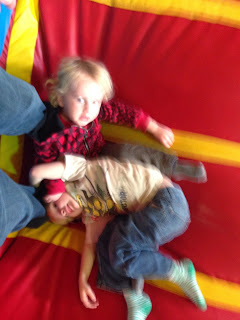 As you can see this is due largely to the deep pucker I create in the fabric of space-time/bouncy-house, but there are other forces at play as well. Namely, I've found children are drawn to the novelty of a professional basketball player sized man/boy who's clearly excited to be playing in his socks in the middle of a weekday. This oddity is irresistible to boys ages 3 to 7 and, to be honest, it give me the willies. I can NOT get enough of my boys running at me full speed and launching into a spine wrenching embrace, but little snot-covered mystery kids doing the same thing gives me the creeps. I usually just fling them off instinctively, like when you find something wet on your hand and you're not sure what it is or where it came from.

By the one-hour mark the Ritalin starts to wear off and a few of the 7-year-olds start getting a bit frothy, but generally the other kids there aren't too bad. The chubby sweaty 6-year-old with the "Awesome Crusher!" monster truck t-shirt apologized immediately after kicking a soccer ball into Finn's face as hard as he could. Fortunately all the balls there are made of a special squishy material that only stings for 30 seconds.

About an hour and fifteen minutes into playtime the boys were starting to wilt. The intense jumping, flipping, and rolling gave way to a kind of lazy wrestling. 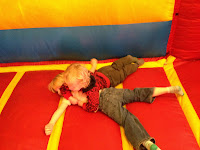 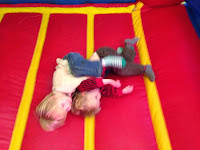 I figured it was time to try some of the other options offered up at Pump it Pump. This was the first time I'd been there with the boys where they got tired before they got injured so we'd never explored the three other options. Option one was the air hockey table. Finn tried to make a grab for the puck while two other kids were playing and immediately got his finger smashed.

Option two was the game where you pay a dollar to maneuver a claw down on top of a shitty stuffed animal so you can watch the jaws snap shut an inch above their target...every fucking time.

Option three was "The Vortex". This is a cylindrical chamber into which you trap your children while violent winds blow at them. They're happy to go into the thing, but the time it takes you to get your two dollars fed into the machine is exactly the amount of time it takes for the kids to get completely freaked out and start screaming for freedom. At this point you have a choice: either hold the door shut as they bang at the glass, tears streaming in the wind OR eat your two bucks and let them out. I went for the latter. 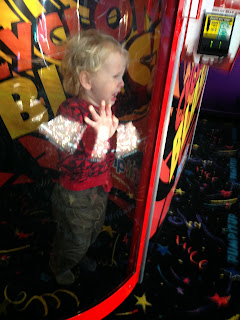 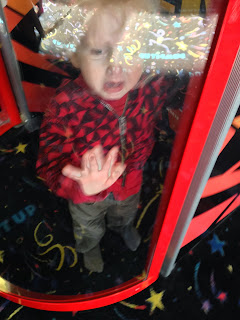 So we didn't quite make it for the full hour and a half, nor did we escape the place injury-free, but it was still worth it for the nap that followed and for something else so sweet that I hadn't noticed until that day; the boys really rely on one another. It's so cute it melts my brain. It made me think about their past two years together. From the beginning it was rough for Liam. He was not into this whole "having a brother" thing. But now they're the one constant in each other's lives and they're starting to show real affection for one another, in that lion cub kind of way. Who knows, maybe we'll see a hug by Christmas.
Posted by Unknown No comments:

I just celebrated my 39th birthday and decided to buy a bike. Living in wine country means there are tons of cyclists, many of whom are good friends of mine. Consequently, I was able to score a great deal on a used bike and can now draw from my friends' vast library of knowledge and personal anecdotes to complete my transformation into an "avid cyclist".

I can admit the timing of all of this is highly suspect, what with my marriage ending this year and my 40th birthday looming on a not-so-distant horizon, but I swear this isn't really a midlife crisis. I had a proper midlife crisis just before my kids were born, so this is more of my midlife "crossroads". What's the difference you ask? I'm not sure but I think it might have to do with the clothes.

I was promptly informed that I need to get a "cycling kit". I thought that was a neat idea! A cycling kit must be some kind of combo bike pump/tire patching/key holding/card carrier/bike light type thingy that you strap your frame, right! Wrong, it's this: 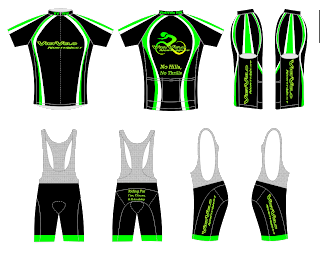 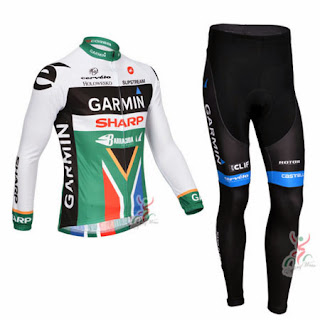 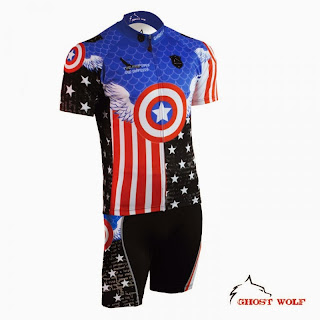 Why why why why why?! Am I going to be fired from a cannon? I understand there's some function to these things, such as padding, but why so many colors? Why so very tight? What's with looking like a stock car with too many sponsors? 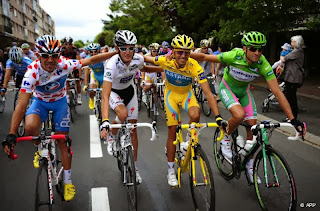 I reached out to my sister Maggie who just started riding a fancy bike herself and asked her what she thought. She jokingly suggested I show up on my first day wearing one of these: 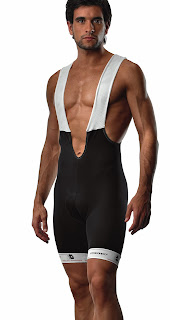 I thought it was hilarious and shared it with a friend who has been coaching me through this transition. She immediately touted the benefits of wearing a "bib."

"You can't be serious," I thought to myself.

I once saw a 300lb man wearing something like this and nothing else. He was on a bike and riding up a slight incline toward a winery I used to work at. He was straining only slightly less than his outfit. 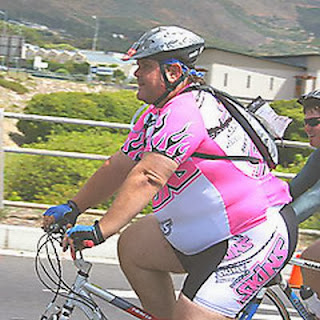 Maggie assured me that all I needed was a pair of padded shorts and a helmet so I'm following her lead. The lumpy neon alien look can wait until my kids leave for college.

It's important to try and keep things fresh in a relationship. This doesn't just apply to romantic relationships, you've got to spice things up with your kids too. I just had the boys with me 9 out of the last 11 days and I could feel things starting to get into a rut so we tried some new activities. 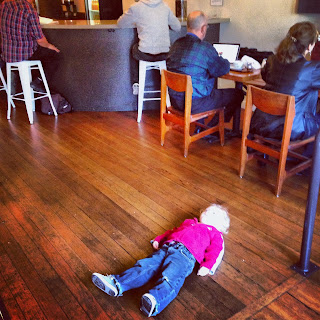 This was both fun and thrilling. Fun for obvious reasons, and thrilling because there was real danger of being crushed by the caffeine deprived bleary-eyed public, unprepared for errant toddlers in their paths. I jumped up a little too late to retrieve Finn from underfoot of a well-dressed woman whose peripheral vision was obscured by a massive cashmere scarf. She stumbled and I apologized, but she assured me saying "it's okay, I own corgis". I have no idea what that means.

Liam has become adept at counting all the way to thirty, which is plenty of time to hide oneself in a one bedroom apartment. After three rounds I thought all the hiding places had been exhausted until I found Liam's clothes laid out in a path leading to this: 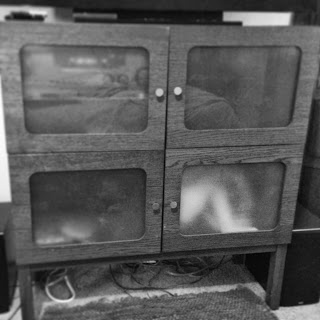 I'm not sure that he needed to take his underpants off to fit, but he's clearly the pro here so I kept my mouth shut.

To be fair this was just for Finn. Liam is adept at this as you can see. 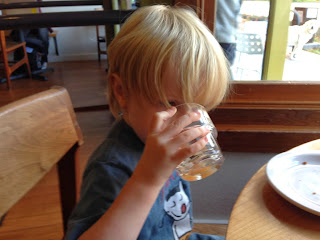 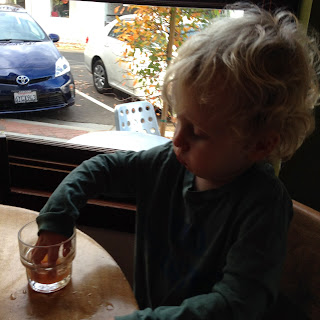 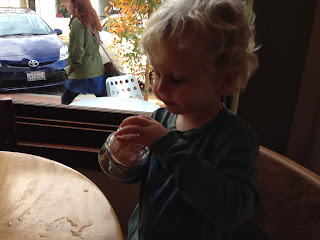 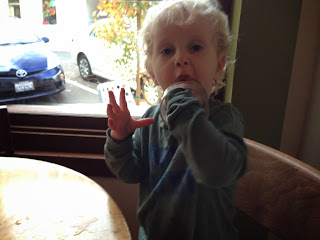 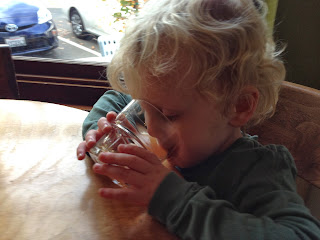 Remember on 'Laverne & Shirley' when Shirley left the show to pursue a lucrative solo career but they kept the title of the show the same? Well despite the fact that I'm the only one who writes on this blog anymore, I'm keeping the 'Pair' in 'Pair-Ranting'.

Amanda's been too busy to write on the blog lately because she's taking a class on blogging. I think it's safe to call that 'irony'.

Anyway, I'm proud of her and I wish her great success. Who knows, maybe some day her name will as much of a household name as Cindy Williams.

I'm a trend setter! So our first Halloween was waaay back in 2009 when baby Liam was just three months old. Check it out! 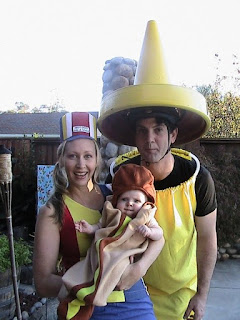 Since then the "Sexy Condiment" look is all the rage!! You're welcome mothers.

And NO I'm not a sexy crayon, I'm SEXY MUSTARD. Why would a sexy crayon be with a sexy Hot Dog on a Stick Girl and her hot dog? Moreover, why would something like a "sexy crayon" costume even exist??!!

The trends in Halloween costumes didn't used to be quite so puzzling. As a child of the 80's I can recall some definite trends but they all made sense. Things like Freddy Kruger and Jason from Friday the 13th were pretty common, but we did sexy back then too with Madonna and Flashdance.  What the hell is this?

I still have a few years to sort it all out before the boys can start making really bad decisions on their own. It won't be anything like the above, of course (thank god I have sons), but I could see them wearing stuff that's in poor taste and just plain stupid. Until then I intend to impose awesomeness upon them. 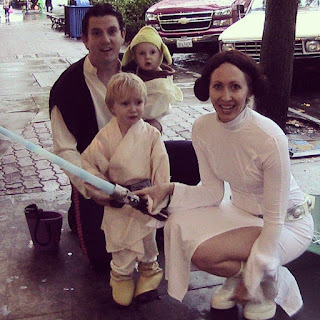 Okay, that was last year and it was a complete failure. Look at Liam's face! Erin and I had insisted on the 'Family Costume' for the last two years and the reaction from the boys has ranged from indifference to abject misery. In fact last year, before I caved and bought Liam a t-shirt at the Wurst so he could tear away his vile costume (Luke Skywalker, come on!), the desperation in his cries had me honestly wondering if he was violently allergic to third world polyester. It turned out the force was just seriously not with him.

So this year Erin bought the boys costumes for them. No theme this time, and certainly no dated pop-culture references. They were in heaven. 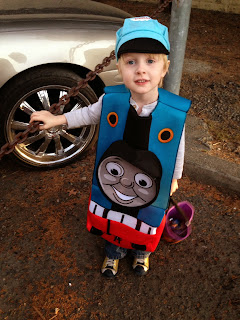 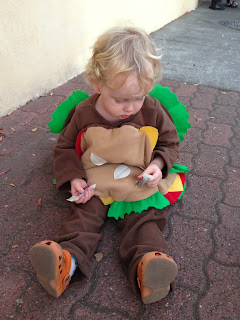 I can't come up with one way to tie Thomas the Tank Engine to a hamburger. It's just too big of a stretch, but whatever. For now I'll concede. I don't want to ruin Halloween for the boys just yet by forcing them to partake in my fantastic ideas, like dressing as the cast of Monty Python's Holy Grail pushing a giant wooden rabbit. They're young and easily scarred.