This is How We Rock the Potty

Who loves to potty on the toilet?


Someone call Merriam-Webster. I've got their picture for the word "smug".

I kind of wanted to tell Finn, "Don't think your shit doesn't stink pal! The evidence of that hasn't left the room yet," but instead I did the big-boy happy dance and lavished him with praise. He didn't exactly make this breakthrough on his own. The grown-up meeting all the adults had on his fourth birthday, to nail down our toilet training plan, was like something out of Ocean's Eleven.

Erin and I agreed on the child seat toilet insert with foot stool, box o' distractions, and matching frog potty back-ups at both locations. 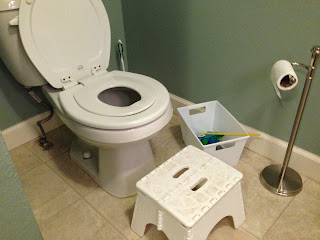 We both bookmarked Finn's favorite music video on our iPhones (Fall Out Boy - Immortals).


And after some debate settled on "The Treat".


The "Potty-Only Toy Box o' Distractions" was more of a mixed bag, but both Erin's and mine featured objects designed to occupy his attention and, more importantly, his hands. Finn is a bit of a "fiddler". 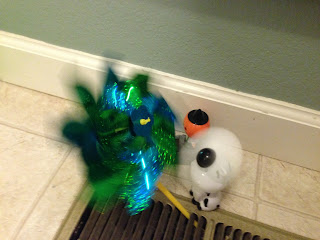 One real bit of magic that Teacher Emily equipped us all with was state-of-the-art identical laminated Velcro visual schedule strips. 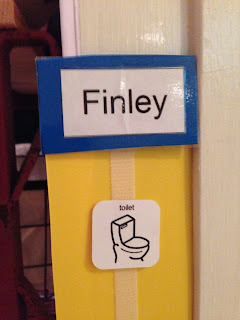 It doesn't look like much but it is the goddamn Jedi-mind-trick! Finn's problem isn't that he doesn't know when he needs to go to the bathroom or doesn't know how to go, it's that he digs his heels in and just flat out refuses. The fact that he, like his brother, is way behind in language skills means negotiating doesn't really work. For some reason this little trick does. All we do is pull the little card with his name off of the Velcro strip and hand it to him. He takes it and places it above the pictogram, takes the pictogram off the strip, and does whatever it describes. In addition to "toilet" there's "dinner", "bed", "brush teeth", "tidy up", and a bunch of others. Every one of them works! He just goes about doing what we've been desperate for him to do, without protest. I may make one for Jodee.

Finally, I can't forget to mention the efforts of a certain somebody who understood best what Finn was going through and gave him the moral support none of us grown-ups could. 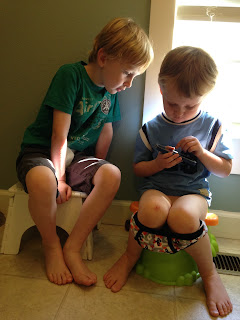