Last year I had the BEST idea. I wanted to re-purpose my old-timey sailor costume into a group costume with Liam and Finn. I was going to be "Jack" from the Cracker Jack box, Liam was going to be his dog "Bingo", Finn was going to be an adorable toy prize, and the three of us were going to win hearts and contests the world over. I took Liam to the costume store to get a doggy outfit but he spotted a "Woody" costume and that was the end of my dream.


So this year we just went to the costume store and I let the boys pick whatever costume they wanted. I guess it is kind of supposed to be about them.

We went down to Railroad Square to check out 'Disguise the Limit' and upon entering Liam immediately covered his eyes and leaped into my arms. Costumes are fucking scary this year. I blame The Walking Dead.

I held him tight and looked for the least gory, kid-friendliest isle. Liam glanced at a few things between his fingers but was ready to get the hell out of there in under three minutes. Meanwhile, I'd lost Finn as soon as we crossed the store's threshold, but figured he'd be fine (second kid syndrome). I found him in a decidedly adult section where he had found a Jessica Rabbit dress-wearing-mannequin and was getting to third base with it. I'm worried about him.

We gave up on costumes and got a cookie instead. While we were headed back to the car Liam said "bee please". Apparently he HAD chosen a costume, so we went back to the store, grabbed one of the three honey-bee costume packs that looked like it had been opened the fewest number of times and was therefore likely to still have all of it's parts (it didn't), let Finn cop a quick feel, and made our purchase.

It needed a few accessories but the end result was pretty damn cute: 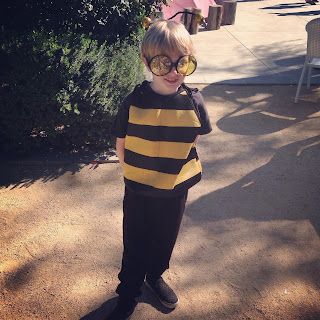 As for Finn, he was indifferent so we let him rummage through some hand-me-down costumes we keep on hand. He chose 'Thomas the Tank Engine': cute, timeless, and consisting of only a hat and a poncho thingy so it was easy to put on and take off. I have no pictures of him wearing it because about an hour before our big Halloween party, Finn took a header into a laundry basket. This left him with a bloodied fat lip and NO TOLERANCE for any sort of dress-up shenanigans. He immediately tore off his Thomas poncho which left him in his ill-fitting, but comfy underclothes. I considered telling people he was dressed up as an 'abused orphan' but thought better of it. 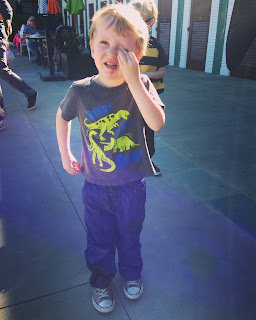 (Don't worry. He still had fun) 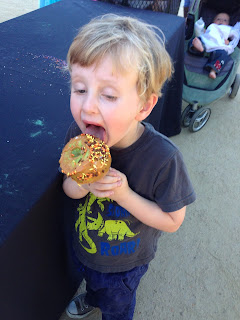