I take pride in the fact that, despite my advancing years, I still have my finger on the rapid, thready pulse of nerd society. I hosted a Dr. Who trivia night prior to a viewing of the 50th anniversary special, I'm the one my friends turn to when they need the post-credit eater egg following the Marvel Cinematic Universe films explained, and yesterday I was one of the first to download Pokemon GO.

Here's a bit about it on NPR

Did you not follow that link? Of course you didn't. In a nutshell, the Pokemon people are using the GPS and camera on your phone to create an "Augmented Reality" game. AR is going to be the way of the future. Within a decade kids will be running through the park wearing goofy goggles and fighting dragons, making Pokemon GO seem pathetic, but for now it's AWESOME. The object is to walk around in the real world and capture little creatures in real places like the park across the street or the fountain downtown. You train these creatures to evolve from cute little cuddlies into ferocious killers and then you pit them against other players' creatures at cock-fight style arenas called "gyms" that are, again, in actual places. The reality of this world can only be seen through your phone (for now) and it looks like this.

This game forces you to walk all around town, get exercise, enjoy nature, battle animated creatures. I'm into it. Liam is BONKERS over it. I can't wait until I get him back home on Wednesday. I should have leveled up by then and I caught this today in the parking lot at work. 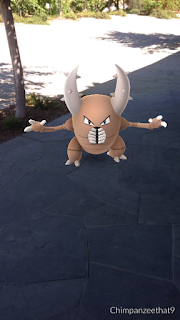 I've named him "Liam-ra the Mighty" and he's destined to be the defending gladiator champion of the Giorgi Park gym, MARK MY WORDS!