When couples break up in the movies it's usually dramatic and ends with someone storming out the door, never to return. The part they edit out is ten minutes later when the dejected lover sneaks back in the front door to retrieve their keys, the most recent phone bill, and a few pairs of clean boxers. Drama is exciting but you have to have clean underpants.

My point is that I've found the splitting up process to be more of, well, a process. I packed up my underpants two whole months ago and have been on a couch-surfing safari ever since. It's been a whirlwind adventure. I have a few more grey hairs now but it hasn't been too bad. I can't really complain thanks entirely to some generous friends for opening their doors to my transient ass and welcoming me into their homes and refrigerators. I'm super grateful to them for making this so much easier than it could have been. You guys absolutely rock.

The whirlwind is due to the usual "working parent" thing combined with apartment hunting while simultaneously trying to sell a house. The house selling was looking pretty grim for a while. Erin and I were sure it was going to be a Take-it-in-the-Shorts Sale at one point, but luck prevailed and in the eleventh hour we got an offer for just enough to break even. Thank the credit gods.

Once we got the offer, my hunt for a new place to live got serious. I suddenly had thirty days to find something great for myself and the boys in a rental market that's been described as "abysmal". The very first place I checked out had promise and I thought I had better go for it, but the space and the location weren't going to work for the boys AT ALL so I backed out. I told the very nice woman that owned the place that it was 'bad timing'.

After that I applied for everything in the Healdsburg area that fell into my price range. This amounted to a grand total of five apartments. After four rejections I started to get depressed.

In my desperation I was quick to call on any number that offered something in my price range. I rang one number with an unlisted address without even clicking on the full Craigslist ad. A woman answered the phone and I switched on my tidiest, rent-paying-on-timiest voice, which is basically my normal voice an octave higher. I'm not really sure why that is. 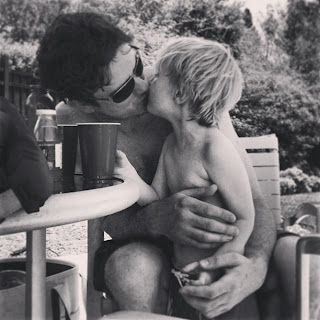 About twenty seconds into the conversation she talked about a father of two boys, like myself, that had seemed interested but had turned the place down. This was when I realized she was talking about me and I'd just called the woman I'd rejected only a week earlier.

The adult thing to do would have been to identify myself, apologize for not realizing I was calling about a place I did not want, and wish her the best, but "adult" isn't my default, so I started disguising my voice.

At first I just kind of clenched my teeth and used small sentences. This just made me sound angry and wouldn't do. It was too late for an accent since I'd been an American for half a minute already so I just went lower and tried to adapt some strange throaty effect to my voice. I ended up going from a high-spirited, slightly effeminate version of my normal self, to sounding exactly like the serial killer from Silence of the Lambs that tucks his junk and dances in a suit made from women's skin. I think she's relieved I didn't follow up.

At this point I realized I was doomed to end up homeless. Or worse, in Windsor. But with that last performance I kind of deserved it.

I was starting to give up when just this week I went to my appointment to see apartment number five. It was on Haydon Street in Healdsburg, just a few blocks from downtown. Despite living in Healdsburg for thirteen years I don't think I'd ever walked down this street before. It's gorgeous. It's lined with pristine and well gardened Victorian homes enshrouded in enormous oaks and redwoods. I strolled down the street and felt a nostalgia for a period in which I'd never lived. It's the kind of place you'd expect to see the Morton Salt girl walking the RCA Victor Records dog, or something.

About halfway down the block I was shaken from this trance by an out-of-place hideous grey-green cube that, as of yesterday, I am grateful to call my new home. The landlady is sweet, the rent is great, and the place is just fine. When I got back to my old house (I say "old" already) I found Erin there who too had scored a new place to live. Less than a half an hour after this revelation our real estate agent showed up with the final page we had to sign to close the deal with the old home's new owner. Things couldn't have ended any sweeter.

So now I'm feeling a ton of gratitude. Gratitude toward Erin, my friends, my family, to merciful fate, and of course to my two precious boys, without whose infectious laughter and love I wouldn't be able to so easily brave the storms in life like these. I love those little fartknockers and I hope they love their new homes.
Posted by Unknown