There Goes the Blog

Since Paulie and I broke up over two months ago, I've had several people tell me that my writing is much funnier when I'm single. I mean, people I didn't even know read the blog. I'm not sure what it is about being single that makes me funnier - the self-deprecating snarkiness? The joke I make of my life? The acceptance of settling? Anyway, whatever it might be, I appreciate the feedback. And, I have some bad news:

Paulie and I got back together.

I know, I know, but what about the blog?! I'm sorry!! That was my first thought too, when he approached me recently and told me he wanted me back and would do whatever he needed to to make that happen. Frankly, I was shocked. I was finally feeling like myself again, realizing I'd survive, considering the idea of dating. Then BAM: "I want you back." What?!

I told him I'd have to think about it. Sure, our relationship was the greatest thing ever and angels hovered above us wherever we went, singing and playing their love harps, but there were a few issues that would need some tending to if I decided to say yes. So I walked away and gave myself time to think about it.

I consulted with some friends and everyone seemed bored before I even started. "Um, YEAH" they seemed to collectively say. "Of course he wants you back, duh! You guys are, you know. You know."

I thought, but wait! I'm just starting to feel back to normal! Nevermind that I'd forgotten how to flirt and had been rejected by an entire audience of men when I announced onstage during my most recent Mortified performance that I was "totally single!" The closest I got to getting lucky that night was when a very drunk lesbian whose eyes went in and out of focus invited my non-lesbian friend to come home with her. Still! I wondered if I should give the single life a little more time?

And then I remembered...that I'd had some drinks with a couple I know a few nights back, and...we'd all decided it was a great idea for me to...make myself available for 'relationships with arrangements' let's just say. I remember saying "well I mean, come on, if I'm going to go out on dates anyway, and probably end up having sex anyway, why not get paid for it, right?!" They wholeheartedly agreed and said "yeah, totally!"

So by the time Paulie changed his tune I had almost completely justified to myself the idea of becoming an upper-lower-class hooker and was wondering if I should buy some different shades of lipstick and maybe a new razor. I'd had an opportunity like this back when I was a teenager, but had turned up my nose at it. Now it seemed completely reasonable.

Sometimes throughout the day I would stop and think wait, have I lost my freaking mind?! But then I'd remember that I'd already had the love thing. I didn't want to try that with anyone else. I may as well pay off some debt, right? Ha ha. Yes, I laugh at myself even in my head.

So let's see. Since Paulie and I broke up I'd spent approximately 8 weeks suffering, had been rejected en masse, then decided that the only way to improve my situation was to become an escort. Yep, things were really starting to look up for me!

Making the decision to get back together was tough, heh. But I'm pretty sure I made the right choice. The debt collectors might feel differently, and I guess all of my fans too...but they'll get over it. 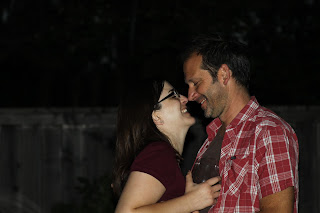