Last Saturday morning I opened up the front door and let the boys journey out on their own. The liberating thing about these kinds of outings is that they are in charge. I just set them loose and follow them wherever they want to take me. It's fun for them sure, but mainly letting them roam free is a great way to get them to burn off some extra energy, which was critical on Saturday because it was "haircut day" and I needed them sedated.

The most harrowing part of the journey is just making it down the concrete steps to the driveway. After that it's pretty smooth sailing. Saturday morning they led me down the side of the street with all the nice B&Bs, straight downtown, past all the shops, through the downtown square, across Healdsburg Ave., around the hotel, into the Farmer's Market, and finally to the bank of dumpsters behind the brewery. In just 30 minutes we blew past no fewer than six post-card-worthy slices of wine country heaven, just to settle on an alley filled with ten tons of stink and fermenting garbage juice. My boys love to mix things up.

While there we spent about 20 minutes playing "I'm gonna getcha!" before retracing our steps back home. On the way back we had just enough time before our haircut appointment for a little coffee, but as luck would have it our paths were crossed by the blaring sirens and flashing lights of an engine from Healdsburg's fire department.

"They're going Code 3" I explained to Liam, reminding him that daddy was a genuine firefighter himself.  Even though I hadn't been a Reserve Healdsburg Firefighter for over 5 years, it still counted. He was duly unimpressed.

The engine slowed to a stop just three blocks away. "Let's go check it out!" I declared, before remembering that most of the calls I ran while with the department involved either broken limbs or incontinence...sometimes both.

As luck would have it, once again, it was just a gas leak at a construction site. Perfect! Apart from the real threat of being consumed by a big fiery ball of flame, it was totally preschool age appropriate. We stood just outside the dizzying cloud of methane hoping to catch the attention of one of the firefighters. Okay, I was trying to get their attention. Liam's newest thing is repetition and after his 50th "Fie-owe Twuck!!" we got a wave and a "Hey Mike". Score! He knew my name. "Do you guys like stickers?" he asked the boys. This was an idiotic question to ask preschoolers. "Heck yeah they do!" I said. 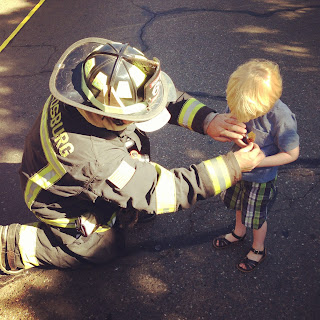 That badge says "Junior Firefighter", signifying honor, integrity, and above all courage. COURAGE! Like allowing a complete stranger to take a pair of scissors to your head while you sit calmly and watch Cars 2. I call it 'pampering' but to Liam it's a small step down from 'waterboarding'.

Suffice it to say the journey around town was NOT enough to work the jitters out of Liam for his haircut. The owner of the shop was in that day and after only 5 minutes of Liam's most horrific screams, she pulled the plug. She insisted that if we continued he could end up never allowing anyone to cut his hair. She had a good point, but unfortunately I think he's already there. Of course Finn fucking loved it. 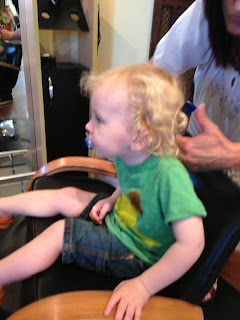 Once we got back to the car I confiscated Liam's badge and gave it to it's rightful owner, along with his well-earned lollipop. 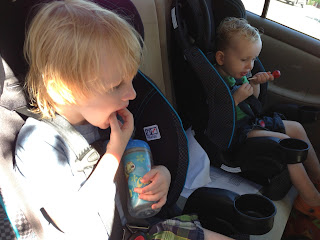