I Have Autism Too, Pa Rum Pum Pum Pum 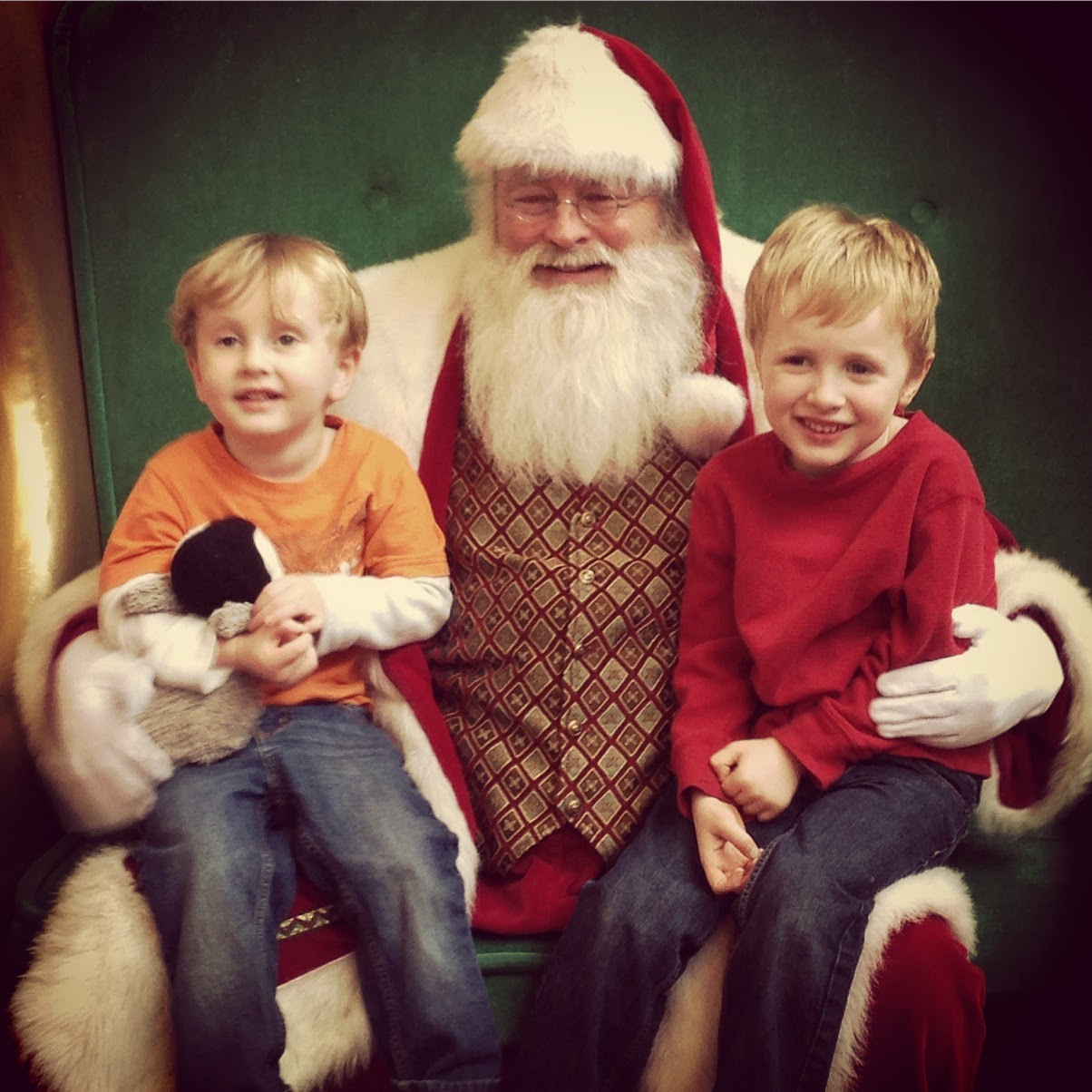 The Holidays have come to a close and what a blast it was, for the most part.

We kicked off the holiday season in the traditional way by heading down to the Pediatric Developmental Disability Office in San Francisco. After just three hours of playing in a sterile room while observed through a two way mirror, Finn earned his very own Pervasive Developmental Disorder - Not Otherwise Specified diagnosis. Ah, the good ole' PDD-NOS. My favorite, and just like his brother!! YAY! All it takes is a language delay and a little bit of obsessive behavior and voila, you too can take a ride on the spectrum.

I'm a little flippant about this only because it's not some heartbreaking revelation. We knew Finn would get labeled ASD like Liam. Just now, it's "official," so the therapies begin. If negotiating the world of Autism Spectrum Disorders, Speech Therapy, Occupational Therapy, Applied Behavioral Analysis, and whatever else they come up with next, wasn't challenging enough with just one boy on the spectrum, now I think I may need to hire a personal assistant. Preferably one willing to work for homemade hooch and back rubs.

Okay, maybe I'm more than a little flippant. I may be giving all the so-called "experts" the mental finger, and I know that isn't right because they're just there to help, but fuck them anyway.

Finn likes to line up toy cars. This made the experts at the PDDO shake their heads a bit and make worried faces while they wrote notes on a clipboard. Rightfully so, it's super tragic. 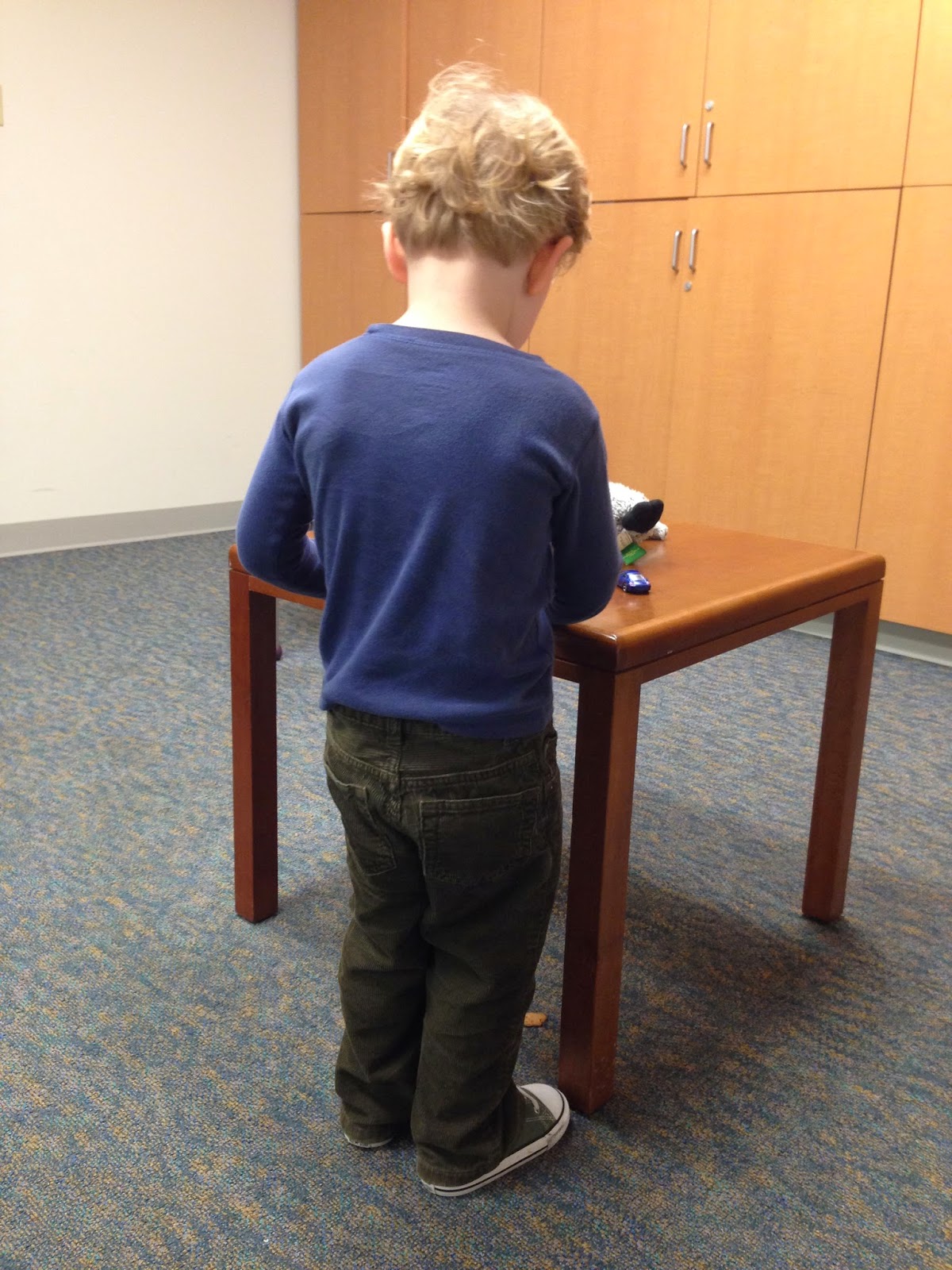 Liam's current obsessive behavior has been the ongoing creation of "Scarecrow". It's a little more disturbing than the car thing, but to be fair, Finn is new at this game. 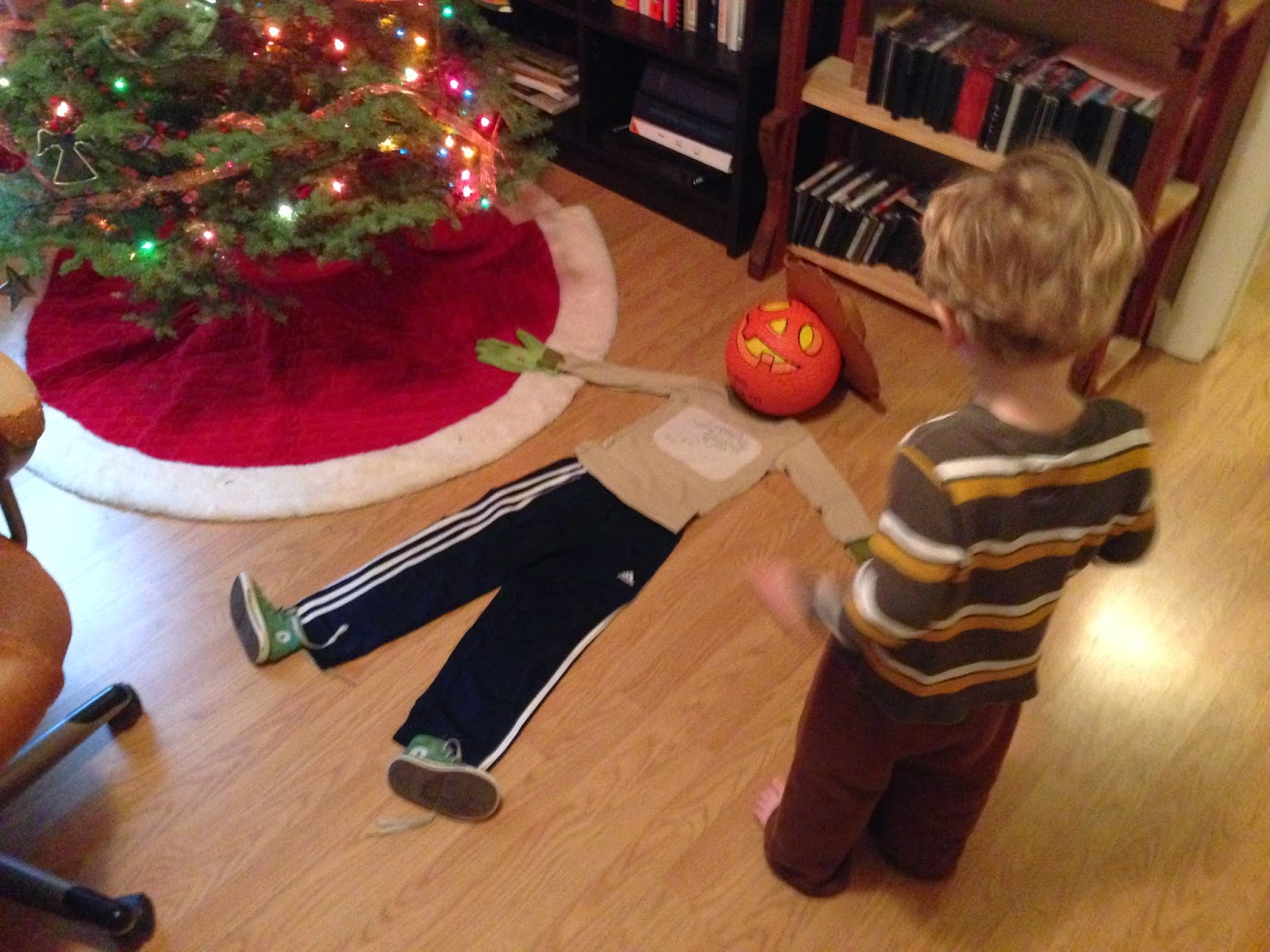 It's evolved to include hands and feet only recently. The latest addition to the ensemble is a pair of Lightning McQueen underpants, but you can't tell from the picture.

Fortunately ASD kids are automatically put on Santa's "Nice" list, and this year Santa finally started figuring out how to shop. A lot of my gifts in years past have been a bust. They would play with everything I would get them, but rarely past January 1st. This year, luckily, there were a couple of successes.

The first thing I did was buy a 20-piece set of Matchbox cars for Finn to line up until his heart's content.

Next, we got him a Pooh. You may have noticed a certain companion of Finn's in just about every single photo of him throughout the blog. 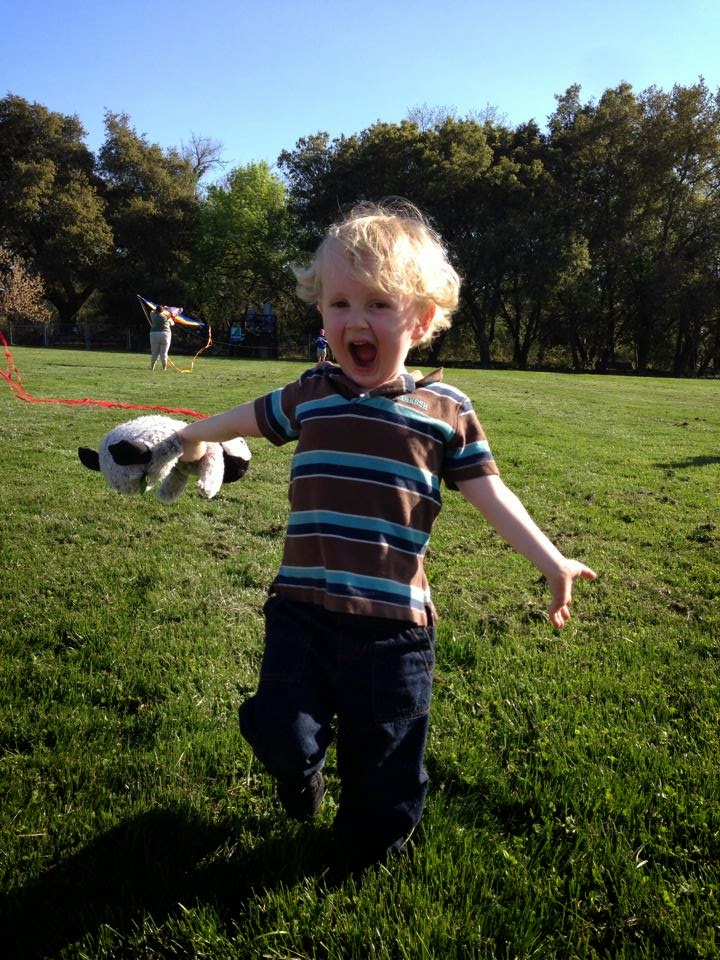 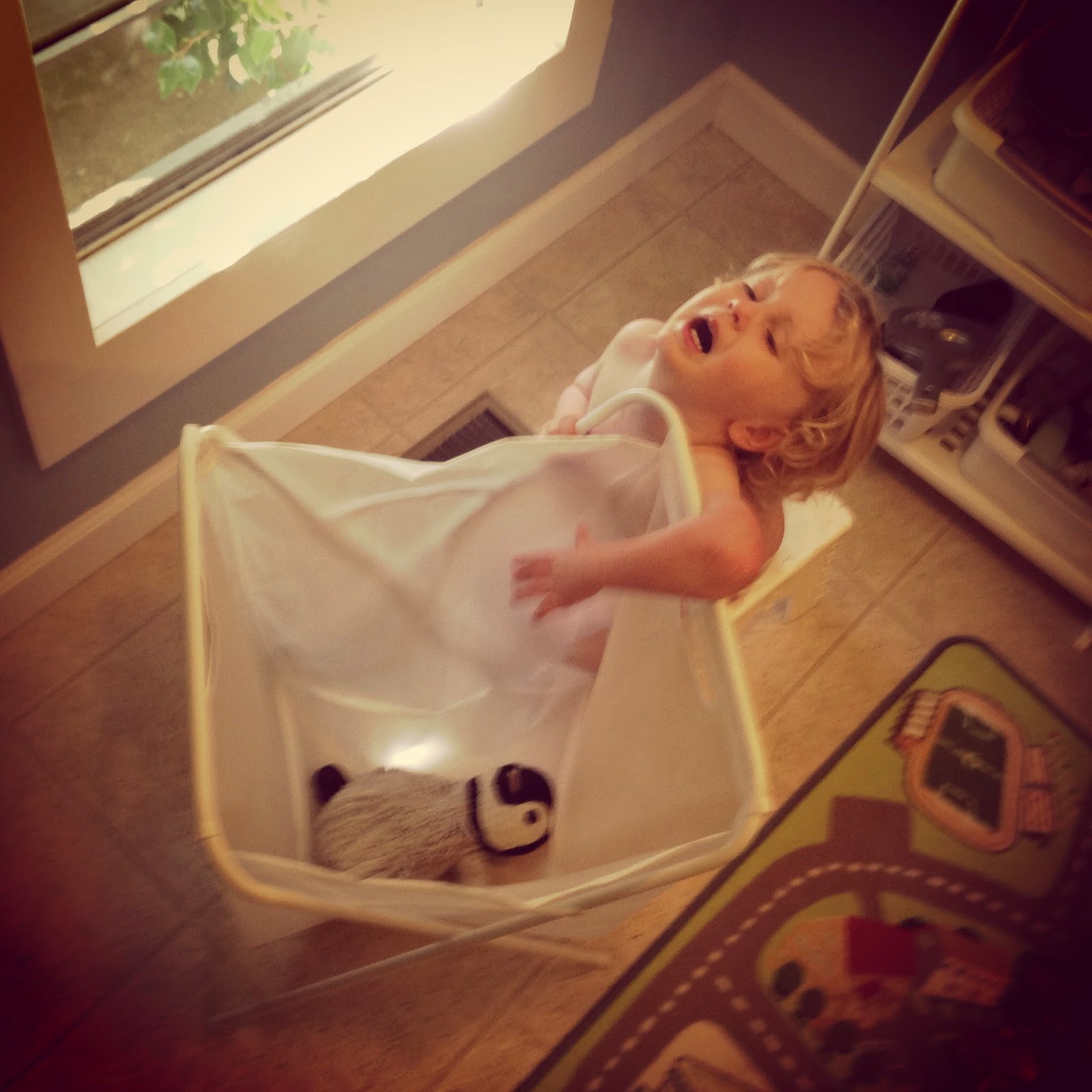 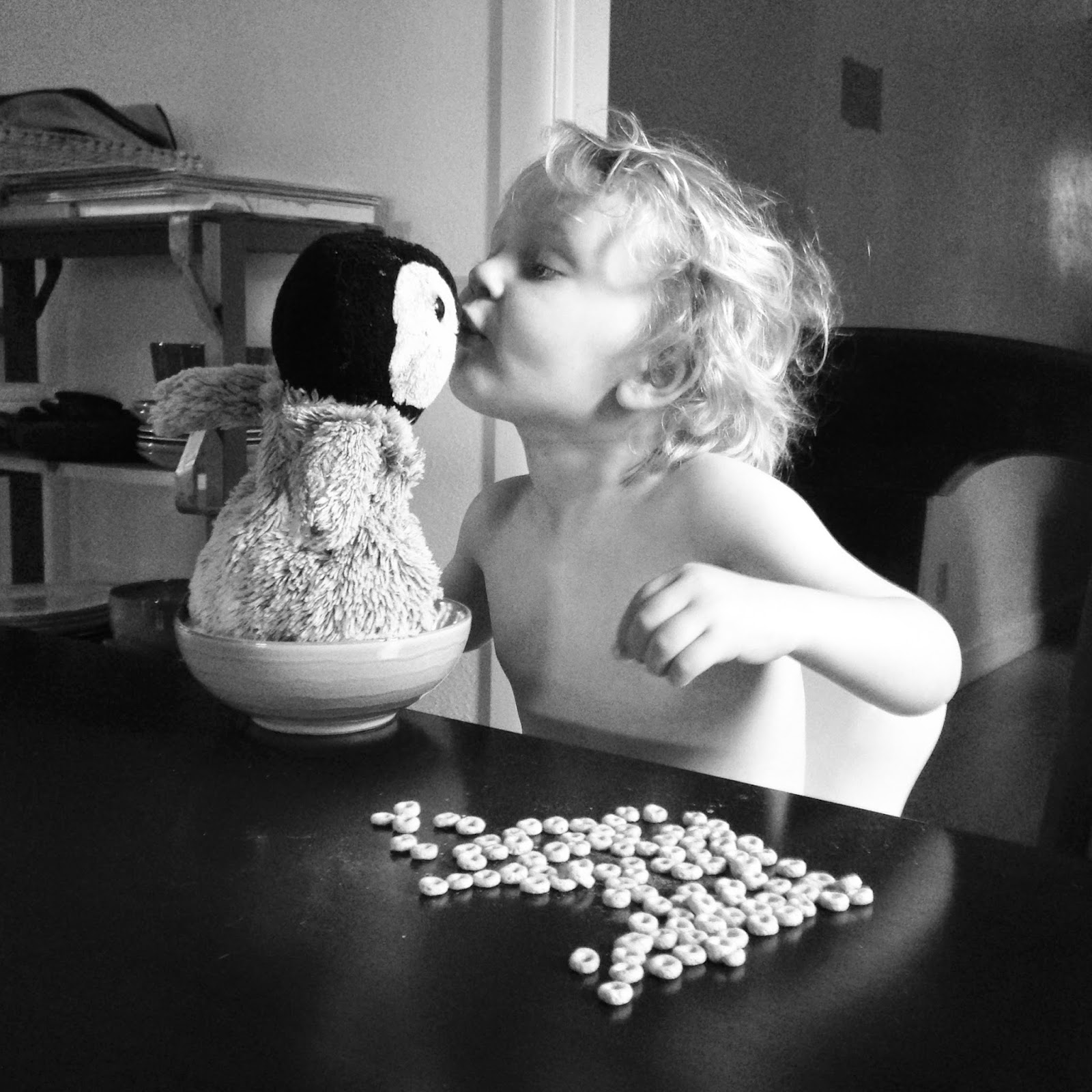 Liam calls him "Eric" but with an Swedish accents so the "E" is long: "Eee-ric". Finn calls him "Pay-bee" or sometimes "Duck-oo" or sometimes "Wdg-dg-dg". He has been Finn's constant companion for well over a year now and needs to be incinerated. We got Pooh to replace him and thought we'd succeeded since their first meeting went as well as it did. 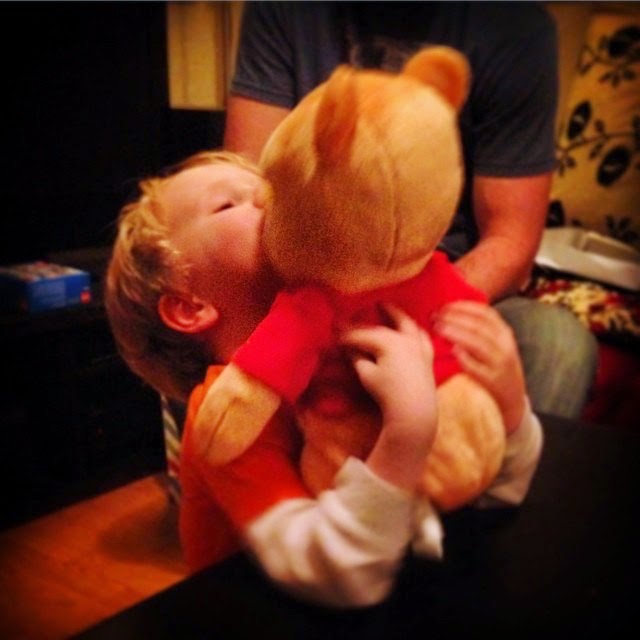 But Finn is loyal to a fault so now he has two constant companions. 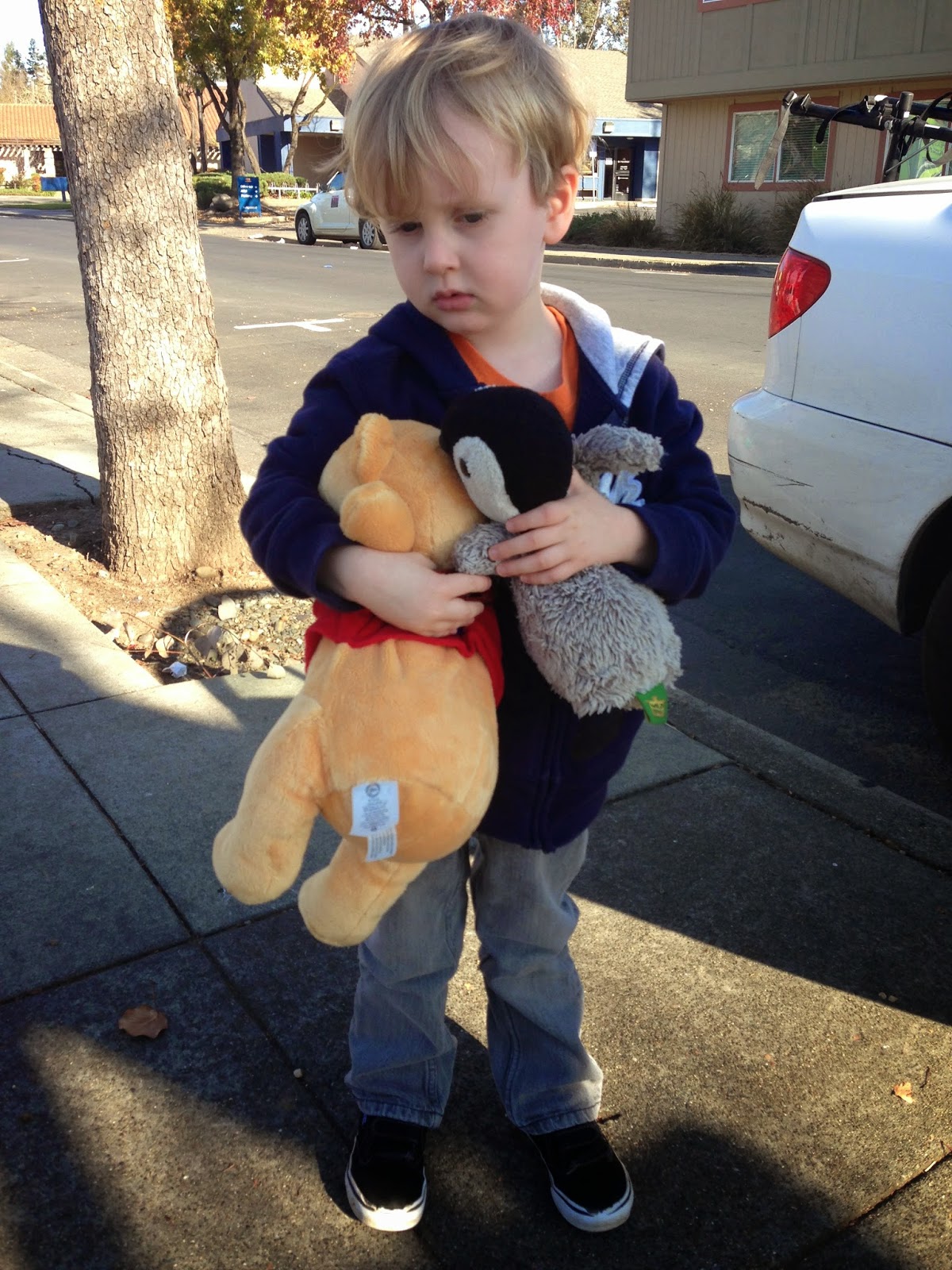 The third major success was the bubble machine. It cost $20 and makes the boys want to play outside, in a confined area, until they're exhausted. Enough said. 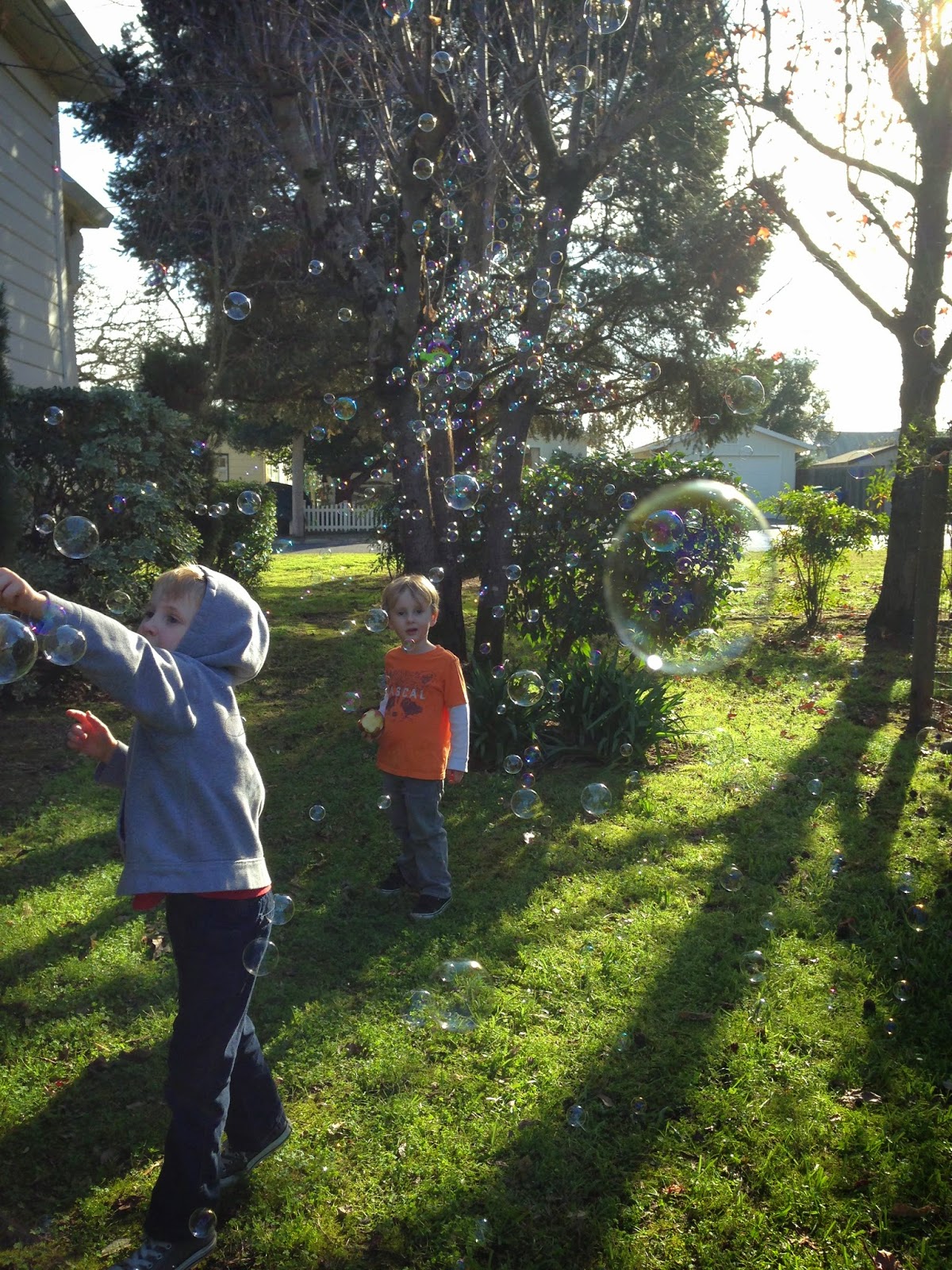 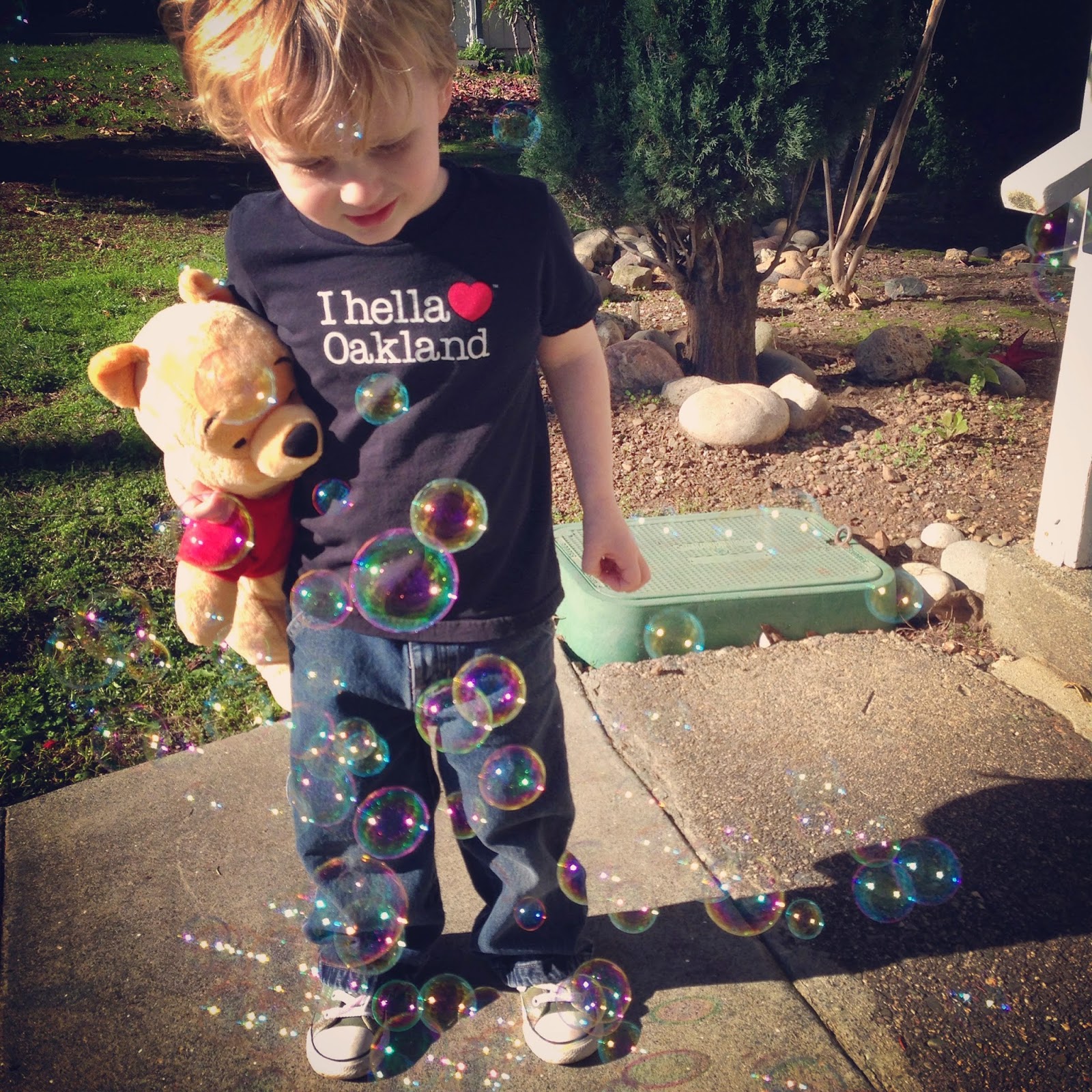 The fourth, and final success was really more of a gift for me. While he hasn't done his business in it yet, he does enjoying sitting on it and doing his best impression of Rudolf Nureyev. 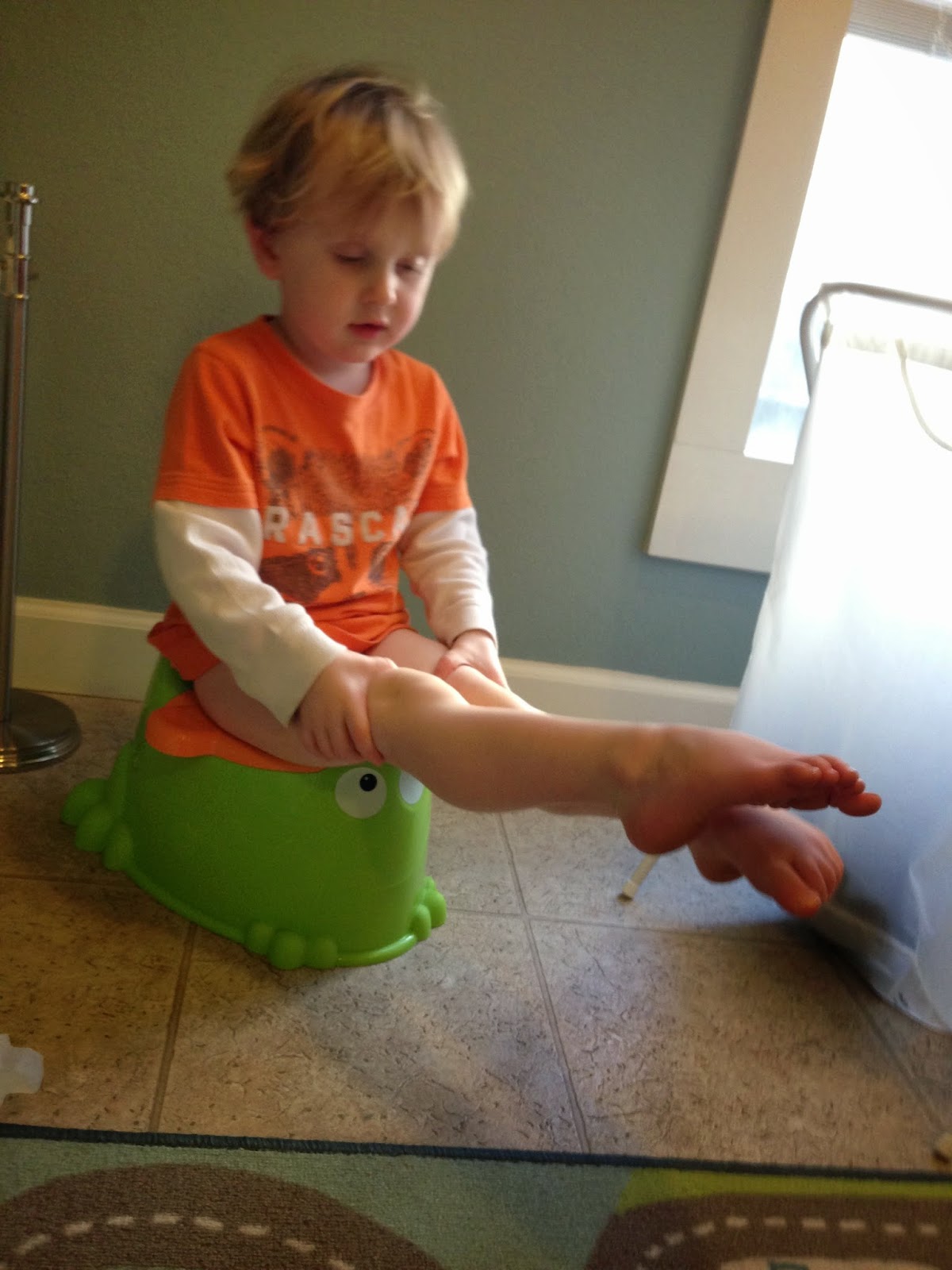