This past week Liam turned four and my baby sister got married. I'd love to write about those things, but first I have an incredible story to share.

I learned at my sister's wedding that people are actually reading this blog. This is great news! Those people will know the gist of my current life chapter. For those who haven't kept up, here's the story in a nutshell: I'm splitting up with my wife which is sad, but we found a buyer for the house and new places to live so all is well and the boys are doing great.

I never mentioned much about the buyer in this blog because I didn't want to jinx it. About a month ago we'd given up on finding someone to offer anything close to what we owe on our house, so it was going to be a "short sale". A short sale in real estate (for those who haven't been keeping up on the subprime mortgage crisis) is basically where we tell the bank our situation and they agree to take what they can get for our house so that we don't have to do a foreclosure, which basically fucks everyone involved. The bank agreed and they got an offer.

Then, out of nowhere, in swoops our savior. Though the deal with the bank was done, our agent was still putting out feelers when she came across a man with an offer. Not only was it for more than we owed on the house, it was for more than we'd originally paid. Too good to be true, right!? The bank agreed this was good news and we got to wiggling our way out of the short sale offer. I was curious about the man who put in the new offer of course, so I asked our realtor for details. It turns the guy is legally blind and had offered to pay cash. I'm not sure which of those two things is more unimaginable.

I can't tell you how happy Erin and I were after this turn of good fortune. We got right down to business, signing documents, filling out our disclosure report, and sorting through the details. The bad news was we wouldn't be making any money on the deal after fees and other costs, so our realtor talked to the buyer who...get this...offers even MORE. Why would he do that?? Is he an angel??!! 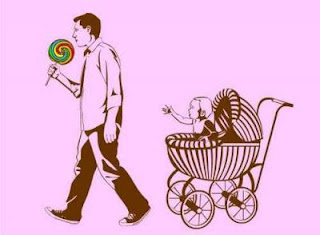 Last week things got weird. The buyer shows up at the house while I'm there watching the boys. Finn was napping so I quietly greeted the blind man and his companion saying "oh, you're the new owner!"

"Not yet" he says. I clenched.

It turns out the man with him was there to inspect under the house. It was 7 days before the final day we were told we had to hand over our keys so Erin and I were both moved into the new apartments we'd only been given 30 days to find.

I woke up Finn and loaded the boys into the car, making sure the blind man at least heard the sound of young children protesting as we left the house so they could do their inspection. I texted our real estate agent: 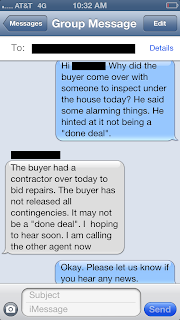 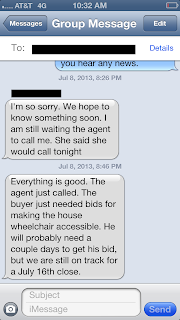 I was reassured but I couldn't help wondering if this guy had some sinister plan. He knew we were short selling originally and he knew we weren't making any money off of his first offer so our precarious financial situation was no secret. He may have even assumed (correctly) that if he backed out of the deal we'd be in real trouble what with the fact that we'd be on the hook to pay rent at two apartments now in addition to our mortgage. A struggling couple with young children caught in that impossible situation would have to take drastic measures. They'd probably have to foreclose and then the house could be purchased for a song. Who would then be in a better position to buy the house from the bank than the guy who had just done all the inspections on the house and had strung the nice young couple along right up to the very end so that the house would be nice and clean and ready to move into? Did he offer us more so we wouldn't field other offers? Did he really have the cash or were we being duped the whole time??

I was being paranoid! People don't actually do stuff like that, do they?

Yes. Yes they do.

I was standing on the porch last night at a friend's house when I got the call. My friend had agreed to let me store some of my things in her garage and I had literally just dropped off my last load. My agent said "I'm so sorry, he backed out of the deal". He claimed it was something about renovations being too expensive. This was just hours before the July 16th deadline. All I could say was "Oh wow. We're fucked."

I feel pretty naive. I didn't know enough about this deal apart from my own nagging feeling that it was too good to be true. I guess because he had offered cash it put him in a position where he could do this with no financial retribution. I guess it's a good thing this guy doesn't have to look himself in the mirror.

I asked about the "sinister plan" I'd suspected. She assured me we would never 'sign off' on a sale to this guy after doing what he did, but I have a feeling it might not work that way. The sale is going to be in the hands of the bank now and I doubt they'll care much about the buyer's moral history, especially if he really does have the cash.

So now what? I'm thinking about painting a giant penis on the living room wall. Something artsy so that any guests the blind man has over to the house will assume it was something he had commissioned and will be too embarrassed to ask about it. I figure it will be months before it's discovered and by then it will be too late. Does anyone have a few gallons of 'taupe'?