The Number One Problem

The greatest challenge I've had, now that I find myself doing the 'daddy' thing solo, is finding time to pee. Seriously. 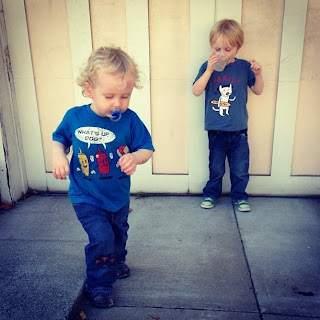 Saturday the boys and I drove down to S.F. because one of my best friends' baby was turning one and there was a party to be had. Even though Liam is about 90% potty-trained, I dressed both he and his brother in diapers for the ride down. I, on the other hand, am a big boy and since it's only an hour and a half drive I knew I'd be okay, but as soon as we got there we said a quick hello to our hosts and hunted down a potty. I let Liam go first while I held Finn and cased the joint.

The party was at my friend's in-laws' house so it wasn't exactly baby proof. It was a little bit like a museum actually. There were lots of fragile expensive-looking things on small tables, some cool antique items arranged carefully on low shelves, and even a very nice set of samurai swords on display. I was going to have my hands full preventing thousands of dollars in damage and possible hara-kiri for the rest of the visit so this one pee break was going to be it. I sat down after Liam and as soon as I let it rip, Finn went for the door. The lock was one of those buttons which pops open easily with just one quick turn of a toddler's hand. Attending the party were a few people I hadn't seen in years and I didn't want our reunion to take place with my pants around my ankles, so I stretched out as far as I could to try and push the button back in. It was a little beyond my reach so I had to angle my "stream" behind me like a cat marking it's territory in order to reach it. Finding this new game hilarious, Finn immediately re-unlocked the door so I swung back over and clicked the button back in again. With few opportunities to pee these days, my body has trained itself to retain fluids better than a camel, so this little tete-a-tete went on for the duration which was about a full minute.

Awkward potty moments like these are common and manageable. It's not just at strange new bathrooms either. Even at home the amount of time it takes to pee is just enough for Finn to smash a jar of jam and begin eating the sticky glass shards, for Liam to blow on Finn's face while he's taking a nap, or for any multitude of punching, pooping, smashing, and other such mayhem to take place.

Most people believe the real nightmare is having to go to the bathroom while driving with the kids, but this is not the case. After Saturday's party there was no chance I was going to manage a pit stop before leaving, not while the boys still had "birthday party" in their systems. They were out the door and playing in traffic before I could say my goodbyes to my friends, so I just herded them to the car and planned to stop and "check the tire pressure" on the way home. "Checking the tire pressure" is when you pull onto the side of the freeway, walk around to the front right side of the car, kneel down on one knee, and pretend to thoughtfully examine the tire while you're peeing on the ground. It takes a bit of acting and an excellent ability to visually judge slope, but it is a life-saving tool.
Posted by Unknown