There were three things I planned on NOT doing. The first was to not blog until after Halloween because the running dialogue in my brain lately has been less like Lesley Gore and more like Morrissey and no one wants to hear me whine like a sad sack. Second thing was I was not going to make any wine this year because I haven't had the resources (money) or the space (something larger than my kitchen pantry) to do it in. The third thing was to avoid the use of annoying wordplay while blogging because it makes people mentally gag (i.e. less Lesley, more Morrissey). Heave. 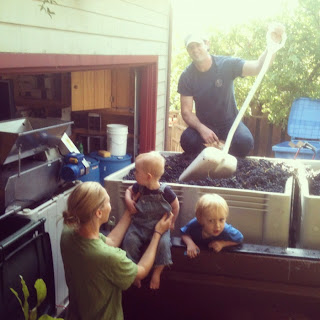 As you can see it was a little slice of poetic wine country bliss. This year, however, harvest day was a train wreck that caught fire, exploded, and polluted the groundwater.

These days Erin is living in a bit of commune out in the vines and one of her neighbors manages the vineyards for a high end wine producer in the Alexander Valley. As luck would have it, this guy found himself at the end of the harvest season with a few tons of premium Alexander Valley Syrah unsold. He offered this to Erin for free. FREE! We just had to pick it. She found this out on Thursday so we had little time to hustle together the equipment and the space we needed. I tracked down a few bins for picking and fermenting, a mini crew of three, and a friend of mine loaned me the all important crusher/destemmer so we could actually turn this fruit into wine.

On Saturday Erin's neighbor took me out to the vineyard. I wasn't going out there to inspect the quality of the fruit or anything, it was free after all, I was just going to see where it was so I could get started first thing in the morning. When I saw the fruit though my head exploded. It was gorgeous. 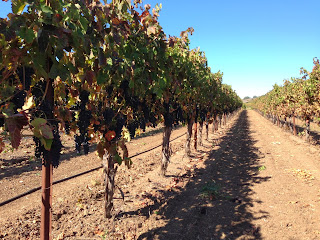 It's hard to tell from the picture, but hanging on the vines was beautiful Syrah, perfectly ripe and delicious. He estimated there was about three and a half tons and I could take all I wanted. Too good to be true.

The next morning I got the boys up early, made breakfast, and dashed over to Erin's house where Grandma was waiting to watch the boys for me. Erin's landlord had agreed to let us use the garage on the property. Everything was falling right into place and I was starting to get really excited. The vineyard was less than a mile away so Erin's father and I loaded up the truck and headed out. Erin was supposed to be the third member of our crew but she got stuck in the city overnight and wouldn't be back until noon. "Crap!" I thought, "All that fruit and just the two of us picking?"  The solution to this problem quickly presented itself.

As it turned out, Erin's neighbor had apparently found a last minute buyer who had harvested during the night. Mercifully he'd left a little bit behind. It wasn't much but it was still FREE so I quickly recovered and set to picking. In the end we had only one quarter of a ton. Better than nothing!

I wasn't going to be able to do my usual two barrels like I have every year for the past decade or so. The amount we picked would probably only produce about 30 gallons, but with the money I'd saved by getting FREE GRAPES I'd be able to buy enough wine for the rest of the year to supplement this year's meager yield.

We took our little bin home and I set up the crusher/destemmer and went to go get Liam. Finn was napping which was just as well since he's a liability around wine making equipment, but Liam was eager to be a part of our annual tradition. It's sort of been my fantasy to have the boys grow up with an appreciation for wine making. I want them to one day talk about their early fond memories of watching their daddy at work. I positioned Liam safely behind me in the bed of the pick up, grabbed my shovel, proudly scooped the first shovel full of fruit into the crusher, and flipped the switch.

It spun around for 5 seconds before completely seizing up, never to turn again. In my haste I hadn't bothered
to check to make sure the thing worked. I'm guessing it's owner hadn't lubed it in a while because it was rusted solid. I climbed down and did what I could to try and get it going. This amounted to turning it on and off again a few times. All it did was make that humming sound machines make when they're trying to work but can't. It sounded like a constipated robot.

So I stared at it for a long while.

A long, long while. 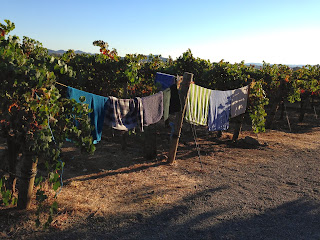 All was very quiet. A fly buzzed by. Over in the vines some laundry flapped gently in the breeze. There was something about the laundry I didn't like. I felt like the towels were shooting each other knowing looks and motioning toward me. Go to hell laundry.

I realized Liam had been looking on for a while as the reality of my situation was settling in. I glanced over at him and he had the same pained expression on his face that I had. I regarded this for a bit and realized I don't give him enough credit. He understands more than people know. His empathy for my situation at that moment clearly demonstrated that fact. Then I realized he'd just crapped his pants.

I stripped him down right there and took him up to Erin's bathroom. I pre-treated what I could and tossed all affected areas into a laundry basket. In the end this included his underpants, his pants, both socks, both shoes, and the bathroom rug.

After getting him dressed and putting on A Bug's Life, I went back down to stare at my busted crusher some more and to assess. I had a quarter ton of grapes. I had no way to process them, no where to put them, and no means to move them even if I did have any place to store them. I had a truck, a crusher, and some borrowed bins I had to return that night. And upstairs I had one napping son and one freshly de-pooped son, both of whom were going to be hungry soon. Time to cut my losses and go home.

I made one last futile attempt to salvage the whole mess by asking the Facebook community if anyone could use my grapes. It's times like these when you're frustrated beyond belief that you hope for some small consolation, and having someone use them for something would have been nice. Just the fact that I was glad not to have been stuck with more was some consolation. I had a few bites on Facebook, but nothing practical.


The only thing left to do was dump them, and that's when I got my consolation. Liam thought it was hilarious. I figured the easiest way to dispose of a quarter ton of grapes was to put them back where I found them, so I had Erin drive the pick up truck down the rows between the vines while I shoveled the grapes out the back. We were only going about 5 mph so I thought it would be safe enough for Liam to ride back there with me. He stopped laughing hysterically just long enough to shout "BYE GWAPES!!" after each shovel full. My hero. 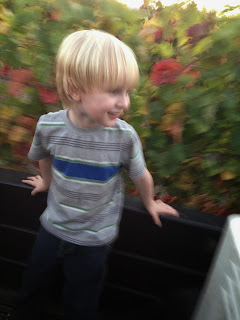 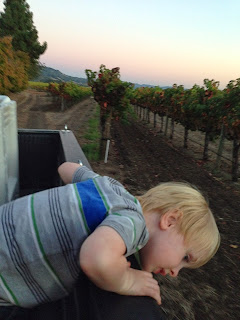