The Case of the Totally Lacking Pajamas

Yesterday I became mildly (read: verging on panic-attacky) obsessed with the fact that I didn't have any pajamas.

You see, today we are heading up to the fair city of Eureka, where we will spend the weekend celebrating the fiftieth (read: Five Zero) wedding anniversary of Paulie's parents. I know. It's crazy. That's a buttload of years to be married to someone. But whatever; they did it, so hoo-ah! celebrate we shall!

The pajama concern came up because joining us on this celebratory vacay will be one teenage son of Paulie, and one girlfriend of teenage son of Paulie. Let the good times roll!! As I am eternally the 'Bad Cop' in this arrangement, it was fun finding lodging that would accommodate Paulie and I, plus a separate bed for the teenage son, plus a separate bed for the girlfriend of the teenage son. Both of the teen beds must of course include many a loud obstacle (old springs, creaking floors, squeaky doors...you get the point) which will alert us to one teenager or the other trying to sneak into the warm, toasty-smelling embrace of their beloved. NOT ON MY WATCH, KIDDOS!!

Anyway, I realized I would be up constantly, making excuses to bumble into the main room (where one of them will be sleeping on the futon) to make tea, or pass through to use the bathroom, or pretend to be sleepwalking - the usual. And if this were going to happen I couldn't just be in my dowdy old 'everyday pj's'...i.e. a variation of whatever I wore earlier that day.


I brought this up to Paulie later that evening.

Me: Sooo...I'm concerned that I don't have pajamas. I think I need some pajamas.

Paulie: You, uh, you have pajamas.

(Therefore unleashing the crazy in me)

Paulie: Yes you do - you just wear the same clothes you wore earlier in the day. Well, the top. And some sweatpants. You have pajama bottoms, at least.

Me: But I'm going to be puttering around making tea and shit and the teenagers will be there and I don't want to be all nipply in my holey t-shirt...I need some bonafide cutesy little pajamas. Like, with a collar or something.

Paulie: Okay baby, if you want some pajamas, you should definitely get some pajamas (side note: I love him! So agreeable.)

Me: And I might need some kicky little robe, you know? Like 'oh here I am in my cute pajamas and I just threw this cute robe over my pajamas because this is just how I roll, kids!' I mean, I need to be like the cool funky step-momish or whatever figure in this arrangement....... (at this point the conversation fades into other mumbly things because it always gets awkward here, ever since I wrote a OBVIOUSLY JOKE blog post about getting married and everyone started freaking out and Paulie got really annoyed with me and I didn't like it. But I can justify the comment above by blaming the teenage son because he's always calling me his step-mom and putting me down on emergency forms as such, because as he says "it's way easier than saying 'my dad's girlfriend who we also live with', god!")

So, while I had grand dreams of slumbering adorably like that girl in that 80's movie, I didn't have the time or money to turn any of this into reality. Instead I brought this hand-me-down cozy-as-all-get-out sweater-thingy that I like to call my Frasier Sweater, because it reminds me of the time Frasier was cat-sitting and he also had a sweater-blanket around him and he looked in the mirror and realized he'd become a Cat Lady. 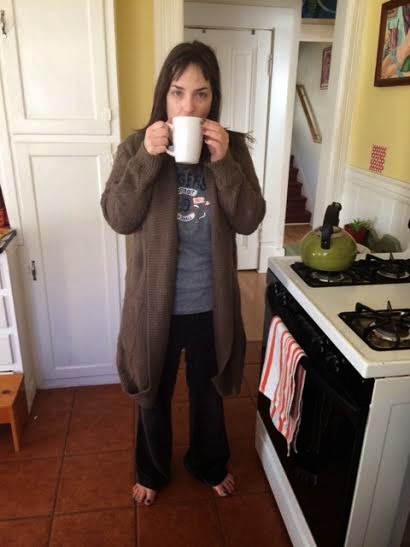 Thank god I don't have any cats.
Posted by Amanda Janik