A Girl and Her Snail

Evie turned nine on Wednesday, and her birthday wish was simple: 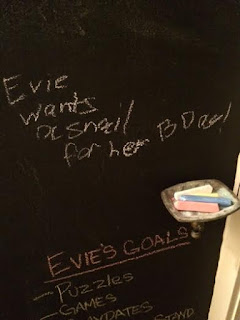 Yep, she wanted a snail. No big deal, right? WRONG! As it turns out, there aren't a ton of snails in my nearby radius during a rainstorm in January. I upturned every chunk of cement, abandoned 2x4 and water-filled flower pot in our backyard, all to no snavail. (Get it? Snail + avail! Hahahahaha!) 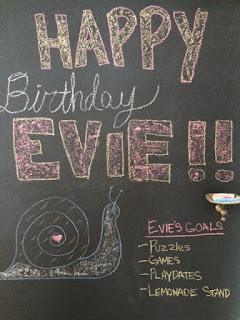 I did some attempted out-sourcing, calling pet stores (nope) and, in a desperately silly moment of mental washout, I called a nursery. Nurseries, as we know, don't really like snails, so I'm not sure why I thought they'd have one. But I called, and they didn't. I texted friends, posted on gardeners' message boards, and hit up Facebook. I optimistically erased the request and drew a picture in it's place, hoping that if I couldn't find a real-live snail, a chalk drawing of one might suffice.

I got him (or her...I think they're one and the same) all set up in it's comfy new home full of water and leafy greens and a little cup to hide in, which it promptly scooshed past in order to crawl up the side of it's terrarium wall to the uppermost corner, where it stayed until it met Evie.

I figured since it wasn't being cute anyway, I'd just go ahead and wrap it up:


Upon picking her up from school, Evie asked no less than six thousand times if I could just give her a tiny little hint about whether or not she'd be getting a snail when we got home. I was like, "no way dude, forget it!" And I made her open her boring book presents first, just for the extra torture. When she got to the big box, she was amazingly surprised! Like I wouldn't get her a snail for her birthday?! Psh, who does she think she's dealing with here, a total amateur??


Since he/she was still hiding, she had to work a little to find her new BFF. 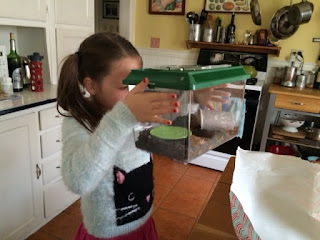 But once she did, they were inseparable. I mean, literally - those things are super sticky. 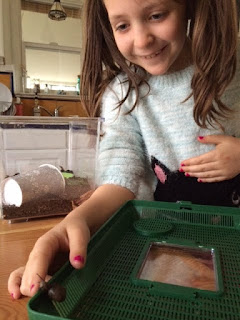 Here is a heavily-cut video of Evie's snail - Flash - crawling. Because it's cute. Happy Birthday Evie!!