Looking back at the blog I see that we got Finn his potty chair a YEAR ago. Since then, the main thing it's collected in its froggy head has been dust. He was okay with the peeing starting last November and there have been a couple of celebrated (though I suspect accidental) turds dropped here and there, but it wasn't until this holiday break that he finally embraced what is universally accepted as truth: pissing your pants is not cool.

Consequently we've recently declared step number one officially reached. In fact, he's so good at going number one, he'll often just sit and squeeze out a teaspoon so he can say "gummy bear", which I'm obliged to award him.

Such prowess with number one should mean that number two will be quick to follow, but this is Finn we're talking about.

Once again, the issue isn't that he doesn't know how to go, or when to go. He's in complete control of his bodily functions, he's just the kung fu master of stubborn. He will hold it from morning til nighttime diaper. I not sure how he does it, but then again his poops are 90% gummy bear these days. 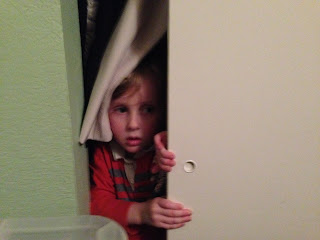 During the daylight hours he's in underpants, with rare exceptions. On long road trips, or visits to locations too sacred to risk an accident, he'll get a midday diaper which he soils the instant the double grip strips lock in place. When he finds himself  truly desperate to go during the day he'll tell me "diaper?", which is my cue to sweep him into the bathroom so we can both sit for ten minutes while he doesn't poop.

Last Saturday, right after a hearty lunch, he said "diaper?" and I put him on the potty with inexplicable confidence. He hopped up, went to back to his room, climbed the bookshelf, retrieved a swim diaper left there from last summer, put it on, went into the closet, pointed his little finger out of the darkness toward the hallway and told me "go". I would have intervened but I was completely transfixed.

Jodee thinks we should try respecting his need for privacy by placing him on the potty and leaving him alone. I'm all for it, though my version might look a little more like solitary confinement than she had in mind.
Posted by Unknown