I have a Clark Griswold complex. I go into the holidays with the same wide-eyed naivety every year and end up disappointed. At least this year the boys reminded me to lower the bar early.

To kick off the holiday I thought I'd take the boys to the mall for, what was destined to be, "the best picture with Santa...EVER!"

They'd watched the Rankin/Bass "Santa Clause is Coming to Town" at least 80 times and were Santa-crazy. Every decoration that appeared at all Santa-esque was dubbed "SAN KWAZ!" by Finley. I figured actually meeting the real Santa this year was going yield the most adorable moment ever captured on film. Here's what we got: 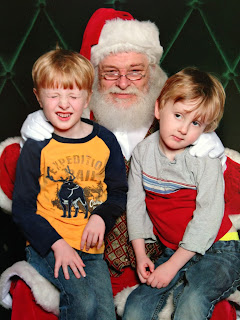 This was the BEST of EIGHT, just by virtue of the fact that all three of their heads are in frame. The first four shots looked like the boys were exploding out of Santa. After some blue lollipops that I'm sure were laced with sedatives (I have no problem with that) and the patented white-gloved death grip seen above (also, absolutely no problem with that) Santa managed to get this moment captured on pricey, high-glossed film. The cheapest package was $29.99.