A Disturbing Tale of Poo

WARNING:  Don't read this.  No really.  I'm not using hyperbole in that title, this really is a disturbing tale.  And the poo, my god the poo.  Poo plays a major role.  In fact, poo is the main character in this tale.  Poo is the Hamlet of this tale, I'm serious.

It was a dark and stormy Friday night.  Erin was out, leaving me home alone with the boys.  Terrible dads are useless in this kind of situation, but they don't read this blog so it's okay to call them terrible...and dumb.  Awesome dads know that the rules for bachelor nights are simple: There will be a group shower before the pizza is delivered, followed by movies, then sleeping (not necessarily in bed).

I made the call and got right down to business.  We were in and out of the shower in record time which was a good thing because while I'd gotten Finn diapered and jammied, and was just finishing the Duck Vader Imperial March with Liam, there was the knock at the door.  Normally it would have been a time of celebration but I was wearing a towel and I didn't know our pizza delivery guy that well.

I dropped Finn and dove into to the closet where there were no clothes because it was Friday.  I managed to put on just enough to not appear too creepy and went to answer the door.

While I was signing for the tip on our center island, Finn crawled up to greet my young bro-friend.  "Hey lil' dude" he said.  I gave him his receipt and noticed he was smiling at Finn, but in a weird way.  I'd creeped him out obviously.  Damn it!  I should have put on pants.

I shut the door and looked down at Finn where I immediately discovered that, no, it wasn't me that had made for the awkward 'goodbye'.  Finn's entire face was covered in shit. 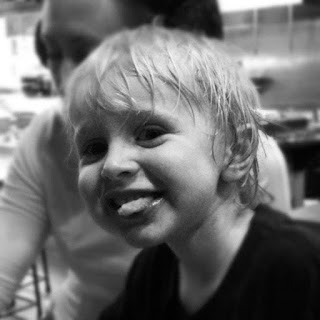 It took a minute for it to register....

Two steps to the bathroom and I found that Liam was not there.  He had wisely retreated to the safety of the sofa cushions.  What greeted my viking "FFFUUUUUUCCKKK!!!!!" scream was an impossible volume of still-very-warm preschooler pudding covering the entire area between the big boy potty and the adult potty.  Of course.

It was everywhere.  How, in that small window of time, Liam had managed to unleash this fury, followed by Finn apparently break-dancing in it, was a mystery I didn't contemplate until much later.  I had to act fast.  I didn't know where to begin but I knew sacrifices would have to be made.  I immediately gave up both hands and one arm by picking Finn up and peeling his shirt off over his head, trying to collect all that I could from his face, while keeping his hands away from his mouth.

By the time I was done the pizza was cold, but that was a moot point.  Well, for me it was.  Liam gladly ate his share having made plenty of room for it, and Finn had twice as much as Liam which was either a good sign or kind of troubling.  I haven't decided yet.

I never punished Liam for his crime.  When I found him tucked into the couch looking guilty I just cleaned him up along with the sofa cushions.  All the potty training books say to never punish or shame your kids when they have accidents because it could be counterproductive.  Of course it wasn't so much of an "accident" as an act of terrorism, but whatever.  I didn't want to take any chances.
Posted by Unknown