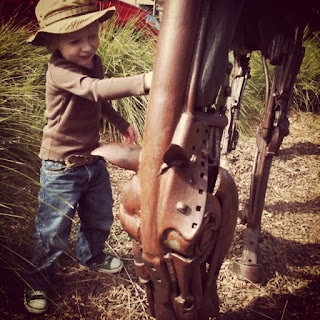 Erin is amazing with Liam.  She makes him laugh, reads him stories, takes him to the park, makes him both types of foods he loves, and generally dotes on him like any loving beautiful angelic young mother would.  Why he loves me so much more than her is a mystery.

I don't mean to sound insensitive.  I used to downplay his obvious preference by insisting that my lap is just warmer, or that he's not really hugging me he's trying to strangle me, or that he wants kisses only from me because he's trying to make me sick, but now it's just too obvious.

A few days ago I had to back the minivan out of the driveway, turn it around, and back it in.  While I was doing this Liam was doing his impression of Meryl Streep in Sophie's Choice.  Erin could barely hold onto him so I quickly parked and hopped out to assure him I was staying.  Erin grabbed the keys and walked toward the car just to test her theory.  "Bye bye mommy!" Liam said, waving cheerfully through drying tears.

Most mornings I'm gone long before he wakes up which he can manage, but if he sees me leave he's inconsolable (I shouldn't be smiling after typing that).  If I pop out to the grocery store without doing my proper goodbyes I'll come home 15 minutes later to his red streaky face and an exasperated wife.

Like I said, Erin is a perfect mom so it really isn't fair.  They say kids will go through phases where they prefer one parent for awhile and then it switches.  I'm just hoping for a major Oedipal complex.
Posted by Unknown