I'm not too heart broken since she'll be back tonight.  She's in Vegas again for "work".

Me:  So...what new developments in the world of tooth care, that apparently can only be discussed in the Nevada desert, will you be learning about this weekend? 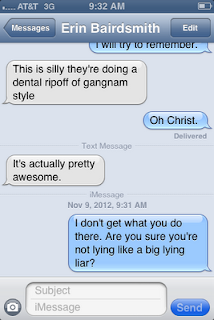 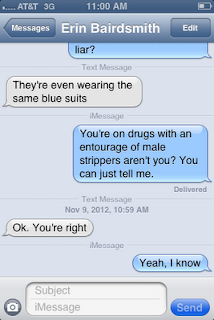 Erin:  Just some continuing education stuff that you wouldn't understand.  (That's not really what she said.  She actually told me but I can't remember what it was because I didn't understand)

Me:  Then why are you packing snake-skin pants?

Erin:  We're going to the conference in group costume.

Me:  That sounds true.

Erin:  It is!  We're calling ourselves Oral Six and the Ejectors

Me:  Right!  Well, try not to come home with anything you can't get rid of.  Love you!

Normally I'd ease my grief by living off of delivered pizza while she's away but we're broke this week so that's out.  We're so broke in fact I've had to spend the weekend holed up since it's too cold and wet for the park and all the good indoor stuff requires money.  This means I've had to find creative ways to entertain two young energetic boys at home all day.  Luckily I made a discovery.

The boys are in their lion cub phase where all they want to do is wrestle 24/7.  They're about the same weight class so it's an even fight.  Nonetheless things got out of hand this weekend often enough that I found myself having to intervene so much I couldn't really do anything else.  I finally just gave in and laid on the floor next to them in the living room.  They immediately took this as the cue to pounce on me and continue their match, feverishly entertained now with me in the mix. 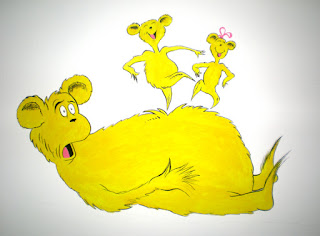 This was perfect!  Not only was this free, but we were all interacting, they were burning off some energy, and they were having a blast without seriously injuring one another.  The only problem was I kept spilling my wine.  My solution to use a sippy cup with a built in straw had its pros and cons.  I stopped spilling but I couldn't set the thing down because Liam and Finn assumed it was for them.  This meant I had to finish it fast (not really a problem).  Also, drinking red wine through a straw means less tooth staining (I learned that in the Nevada desert).

Hopefully they're just as enthusiastic about hopping on mom.  Erin's going to need some good stomps on the head after her exhausting three-day bender conference.
Posted by Unknown