Last Saturday night I crashed through my front door around 9:30 p.m. soaked in sweat, gasping for air, crying hysterically, and wearing a beauty pageant sash with a tuxedo t-shirt.

Around 3 to 25 minutes earlier I was sitting at Healdsburg's Raven Theater enjoying their annual fundraiser, The Mr. Healdsburg Pageant. If you've read the blog before you'll know I'm a shameless fame whore former Mr. Healdsburg. I was crowned in 2010 and have had trouble letting go. So naturally I've attend every year to work on my "psh!"  Just as the lovely hostess was inviting on to the stage the previous years' winners in attendance that evening, I received the following text: 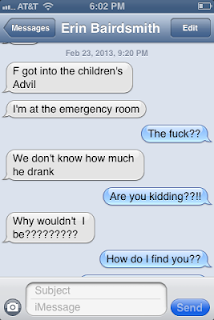 Later I realized there wasn't much I could do, the ER visit was just a precaution, and it was likely Finn didn't swallow any of the nasty stuff, but my instinct after getting this text was "RUN!!". So I ran. I couldn't drive because I was a few cocktails into the night, so I sprinted straight home which was just under two miles. The alcohol in my blood mixed with the panic really got my heart rate going. Finn wasn't there when I got home but my mother-in-law was and the sight of me completely losing my cool nearly sent her to the ER. She managed to convey to me that Finn and Erin were on their way home. The doctors had taken Finn's vitals and released him with instructions to "come back if he has any problems waking up". The wonders of modern medicine.

He was just fine. He woke up (in our bed of course) at the usual hour with the usual level of energy. I'd never been happier to have him sit on my head and bounce.

There's a Murphy's Law to raising a toddler: If there's something he shouldn't do, he will do it. Guaranteed. It's just a matter of time. It's always good to reassess the "child-proofness" of your home every couple of months, even if you're not on your first kid. It's not hard to do either. Just set them loose for an hour unencumbered and see what happens. Here's what Finn did just yesterday after just twelve minutes of closely monitored freedom: 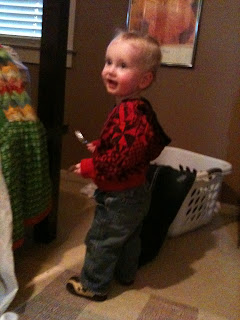 It's hard to tell in the picture but he has a fork in each hand and is headed for the only unprotected electrical outlet in the house.
Posted by Unknown