I was feeling back into the swing of things this morning. I'd gotten up early, made breakfast burritos, and got Liam to school with his hair combed. I treated myself to a little victory coffee with Finn, ran some errands, and worked on some projects at home. I'd lost track of time a little bit and had to wake Finn up from his nap quickly to go pick up Liam from school. No snack, fresh diaper, or even shoes for baby Finn, but hey, I'd had a flawless morning so far, so what's one little hiccup? (sidenote: What do you think about foreshadowing? Annoying right? Just tell the fucking story!!)

I dashed to school, apologized for being tardy, and loaded up the boys. Liam was extra messy, but hey, we were headed straight home right? (stop it)

I had to get gas so we took a quick detour downtown. I came to a stop at the intersection of Fitch and First Street when the car lost power. This happens a lot. Inexplicably the mini-van goes on strike now and then. Usually it happens at stops like this but occasionally it happens in the fast lane on 101. Very exciting. I put it in park and gave the key a turn but nothing happened. A car pulled up behind me so I pushed the button to roll down the window so I could wave her around, but nothing happened. I put on the emergency lights....nada. I don't know much about cars but that didn't seem like a good sign. The emergency lights always work, right? Isn't that the point? I opened the door and waved her around. She pulled up beside us and asked if everything was all right? I said "yes" with so little confidence I think I saw her cross herself as she drove off.

I decided to try the universal sign for "can you help me push my mini-van with two kids in it" which is to start doing it by yourself. Two construction workers nearby recognized the universal sign and jumped to my aid. Once I had it parked I began to assess: One dead car two miles from home. Two hungry tired boys, one without shoes. Among our assets were a diaper bag, one ERGObaby, one pacifier, and a three-day old balloon. Obviously we needed to go out for lunch.

I loaded Finn into the ERGObaby. We had only used it once before when he was a fraction of his current size and just never bothered again because he hated it. His heart hadn't grown fonder with absence. I had him pretty well secured in the thing but I couldn't buckle the crucial strap across my back so it hung on me liked a snapped brassiere. In order to keep him from falling out I had to keep my back arched and my arms spread out behind me like I was miming a Superman cape. I could have asked the construction workers to "snap me up" but, well, they were construction workers, and I was in no state to press my luck. 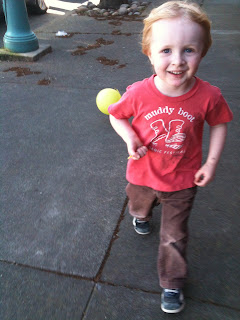 We headed out to The Wurst of course. Nothing says, "daddy's sorry for having a shitty car" better than hot dogs, fries, and ice cream. We started down First Street toward the downtown square and Liam was LOVING IT. He had his new best friend "Banoon" in tow which was his constant companion since they'd met on Saturday and he could not live without. But why would he have to? We were just walking through the downtown area on a really windy day? (I promise that's it, I'll stop)

New balloons are great. When a kid loses his grip on a new balloon it floats away as he screams to the heavens. Three day old balloons aren't so great. They hover just a few inches off the ground like little round, quadriplegic pet pugs that can levitate. Liam lost his grip on Banoon half way across the crosswalk on the busy intersection of Center and Matheson. He never got more than a few feet away from me gave as I gave the universal "ALL CARS CEASE FORWARD MOTION NOW" sign, which is to flail your arms in the air screaming "STOP" while a pissed off one-year-old hangs precariously from your loose ERGObaby.

A brave citizen managed to overrun Liam in his hysterics and stomped on Banoon's string. Liam of course assumed this stranger was trying to kidnap Banoon and his howls tripled in volume and desperation. I tried to thank the stranger but I don't think he heard me.

I decided it was time to stop cutting corners. I tied Banoon to the belt loop in Liam's corduroys and stopped the next woman in her forties (i.e. likely to be either a mother or a least an aunt) She was happy to help me fasten my bra strap. After that the trip to The Wurst was uneventful. I texted Erin the car's location so she could retrieve the boys' seats, as well as our location so she could retrieve us. Luckily she was about to take lunch too so we ordered for her.

Ben Franklin is often credited with the quote "Beer is proof that God loves us and wants us to be happy". Historians say he's not the author of that line, but I've always liked it nonetheless. The reason beer exists is an enigma. It's true that the fermentation of sugar into alcohol is a beautiful, natural process, that occurs so easily and with little intervention or coaxing. This fact has been exploited by man long before recorded history and thrives to this day. Scientists do a poor job of accounting for alcohol's existence and its purpose in nature, but I think that's because scientists have trouble meeting girls, and therefore don't have kids. To the rest of us its purpose is obvious.