Another Car Bites the Dust

I recently posted the following foolproof ad on Craigslist, then sat back to watch in joy as offers came pouring in. I found myself so clever that I truly expected people to clamber over each other in increasingly creative battles of wit and skill in order to obtain my vehicle. 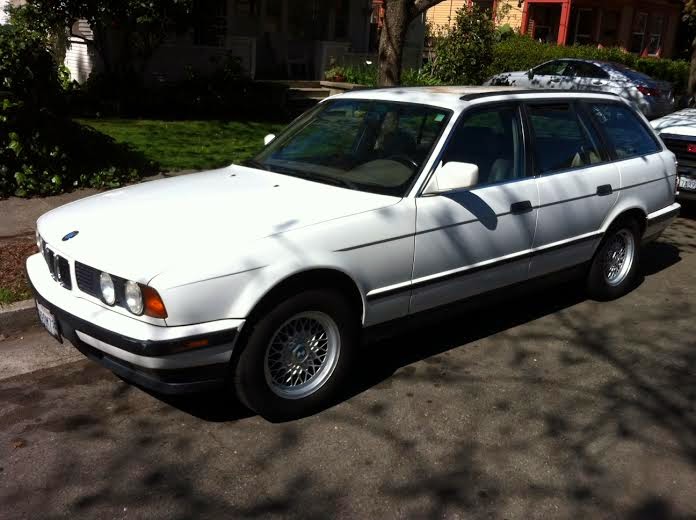 Beautiful 1992 525i BMW Touring Sedan (that's a fancy European way of saying 'Station Wagon'). Perfect white shiny exterior, easy to see on the roads without screaming "pull me over!" like other, redder cars might. Leather beige interior, a huge, open air sunroof, power everything! Requires a sense of humor.

Here are some key reasons as to why you should buy this car:

* Do you have a teenager who is about to enter the driving world? Worried about their safety as they navigate the mean streets? This car is perfect for them!! Not only does it have oodles of airbags and seatbelts, it is a rock-solid tank of a machine and won't crumple at the slightest 'oops I didn't check all of my mirrors' incident. Plus it has a few quirks that won't let them get too cocky with their friends just because they now drive a BMW. Once they are adults and realize what a great 'let me tell you about my first car' story you've given them, your kids will thank you!

* Have you been letting your car do all the work when it comes to proper posture? Stop being so lazy! This Beemer's all-electric seats will not sit straight, and the harder you try to make them that way, the twistier they get - thus forcing you to do the important core muscle work yourself. Your back will thank you!

* Do you dream of driving around in the tropics? Look no further! Due to the fact that the rear driver's side window doesn't close all the way, it sometimes rains inside the car, thus creating a spa-like steam room inside the vehicle when the sun comes back out! Your pores will thank you!

* Tired of being distracted by pesky music while you drive? This is the car for you! The stereo, which includes AM/FM Radio, a tape deck, and a 5 disc CD changer, decided one day to stop functioning, ha...ha...haaaaa! Which is actually GREAT, because now as you drive you can focus on your thoughts, dreams, feelings, and the actions of other, dancing-in-their-seats, singing-at-the-tops-of-their-lungs, not-paying-attention drivers. Your overworked brain will thank you! (Quick note: if you happen to get the stereo working again I'd really like my mix-tape back, thanks!)

Well, that's a fair question, and I'll answer it honestly: the car leaks oil like a mofo. I, being a certified tree-hugger with no mechanical skills whatsoever, cannot justify driving the car around when I can't give it the attention it deserves. HOWEVER, this is where you - car mechanic who specializes in European cars - come in. I've had the engine looked at by the very trustworthy and highly-reviewed guys over at Capricorn motors in Healdsburg, California, and they think they know what's up with the car. It's not a big deal, but the labor involved is a pain so they quoted me $500ish to fix it...but that includes changing out belts and stuff while they're in there, so it's kind of a great deal. If you have $500. Which I don't. 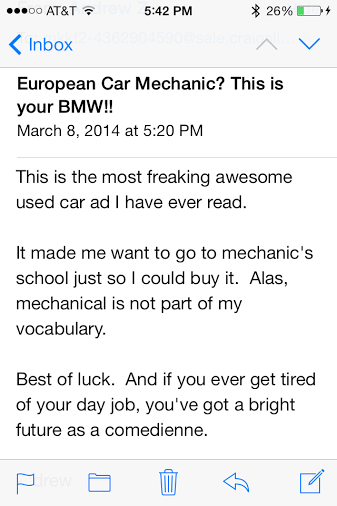 So yeah, needless to say, I got some immediate interest. How could I NOT? Sure, as usual Paulie assumed that everyone emailing me were just creepers trying to get laid, but I assured him they were genuinely interested.

They weren't. Once I mentioned the male presence in my household as being available to show the car, these would-be BMW owners split. That, or they took it upon themselves to send me close-up videos of themselves jacking off. Not awesome.

Then I got an email from a kid who didn't really have much in the way of 'money', but had some incentive to offer me instead:

You would be giving me the opportunity to be independent to pursue recreational and job activities.
In time, I would invest in getting your car road worthy and repair the leaks and other things to ensure it would continue a long productive life on the road.
The car would explore beautiful places like the California coast, Yosemite, Tahoe and mt. Shasta.
You would gain some serious good karma which I would pay forward.

Actually, not. I couldn't sell him the car because my newly-acquired good karma would have been shot the first time he tried to drive that thing to Mount Shasta and failed miserably in an overheating pile on the side of the road.

The quest continues. And of course by 'quest' I mean that I'm probably going to donate the car to charity. I was hoping to recover some of the thousands of dollars I've put into it since becoming it's proud owner, but more than anything, I just really want it to stop dumping oil into my driveway.

I sure will miss the nice compliments I get from the ad, though. 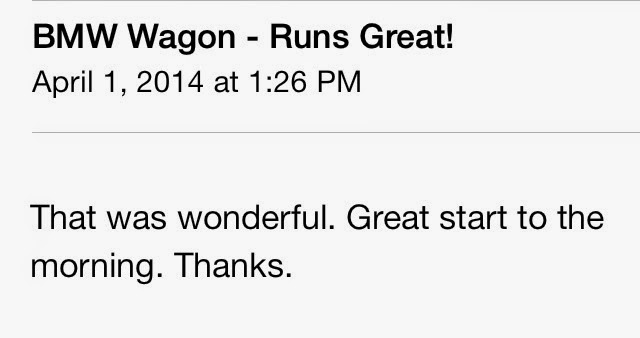 The 'Happy Ending' emails, not so much.