When I woke up this morning, I picked up my phone to look at the time, and then this happened: 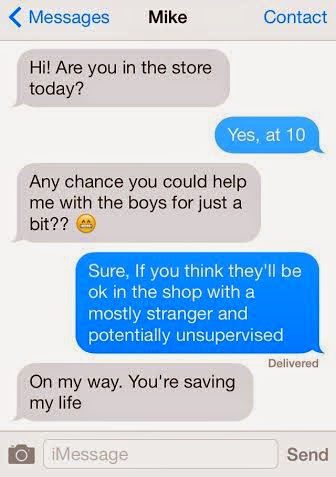 Now, let me start off by saying that Mikey has never, ever asked me to babysit his kids before, because he knows me better. The fact that he thought my being at work was a good time to test the success of trying out this fun new idea was questionable to me, but he didn't take my hint and a few minutes after I arrived, they showed up. 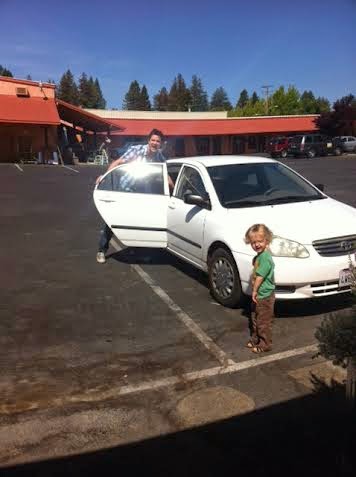 I don't know what Mike is talking about when he says it's tough to wrangle two little kids at once - psh, it's a breeze! First, I stuck them in the corner of the play area:

Then I decided to let Liam do some drawing. He was delighted and when I said "are you drawing a picture for your daddy?" he said "Mommy. Mommy!" When I told Mike about it later, he said "I'm pretty sure he likes her better than me." Clearly this is true.

While I was getting Liam set up, Finn escaped from the play area - those little legs are super fast, I'll give Mike that one. He then found and fell in love with the one toy responsible for the majority of body issues women developed as young girls: Barbie. Sorry, future girlfriends of Finn, this one's on me.


In the time it took me to capture this precious memory on iphonefilm, I lost Liam. This is a pretty bad thing to do when you're watching a friend's kids, but I figured since Mike didn't give me enough notice to buy some leashes, I wasn't actually at fault. Still, I got a little worried. I looked everywhere I could think of but couldn't find him anywhere!

I finally found him. He'd been inside the clothing rack the whole time! Ha!! Kids.


Then the boys discovered every kid's favorite place to play at Sprout. No, it isn't the play area, and it isn't wherever Macy is trying desperately to sleep and avoid children. It isn't with all of the toys - or any of the toys for that matter.

It's behind the counter, where all of my precious worky things are.


I finally lured him in with promises of Barbie's undying love, at which point he and his brother proceeded to trash the place:

We had a GREAT time together! Best of all, Mikey paid me with cheese enchiladas from Taco Grande! Not that I could eat it right away since he decided to tell me a story about how after he'd dropped off the boys he'd had to rush home to use the bathroom because he'd been really backed up lately and had eaten a bag of prunes with 2 cups of coffee for breakfast and boy had that ever worked! Needless to say that made me lose my appetite because poop stories are inappropriate and gross.


All in all, last-minute babysitting in my store while also working and trying to take care of customers worked out fairly well. This time. But just so we're clear - NO, I am NOT available to babysit your kids. Have a nice day!