I'll share this story in bullet points because getting into the details will have me reliving it and I'll start weeping again which is really irresponsible since there's a drought.
The last five days have been a steady stream of agony and panic, relieved intermittently with drugs. Also, Liam has had a hard time.

I snapped a few shots during the whole thing which may seem insensitive, but I honestly just meant for them to be a shortcut to having to call everyone and tell them what was happening. I had my hands full and I was alone, so I knew there would be panicked family and friends relying on me for updates. I thought that I'd group text these photos of Liam just so everyone could see he was okay.

I didn't send any of them. Erin joined me as soon as she could and was amazing. Her tricks for distracting Liam and keeping things light were much more effective than my sobbing and pacing. 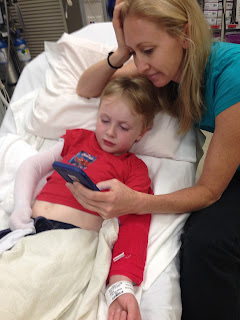 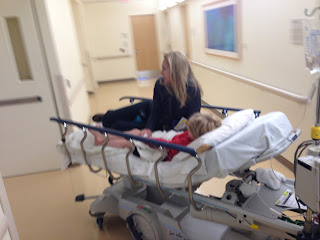 A little morphine didn't hurt either. 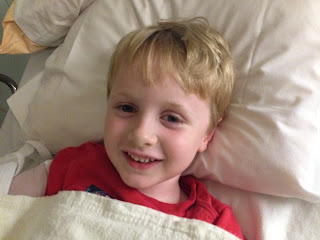 I was a firefighter and EMT for a number of years, but there's nothing that can prepare you for the heartbreak of seeing your own child in pain. It was the worst day of Liam's life and definitely makes it into my top five.

The days since then haven't been a picnic. To say Liam hasn't been sleeping well is a gross understatement. The neighbors can attest to that. In fact, Jodee went and talked to them yesterday to assure them that nothing sinister was happening over at our house. Frankly, we were surprised no one called the police.

For you medical folks and parents of young ones it was a "displaced supracondylar humerus fracture" caused by a little shithead kid that shoved Liam off of the play structure at Summer School. To be fair, rumor is Liam pushed first. Regardless, I politely asked his teachers to NOT tell me which kid did it. I don't want to know.

I'm trying to look for some silver lining to this accident, but it's tough. It's going to be a complete drag for Liam for the next couple of months. I guess if there is a bright side, it's that he's clearly not a victim of "helicopter parenting." He won't be one of those kids who grow up and have their parents write their doctoral thesis for them because they've never had any independence. I don't know. You learn a lot from taking a hard fall, but it's a stretch to call a five-year-old's broken arm "character building." I'm just going to have to take comfort from the old adage "It Could Have Been Worse."

Jodee and I ended our shift this morning and are sending Liam to mom's house until Wednesday. Jodee's been a godsend. With Liam's language issues it's been particularly hard getting him to understand what's happening and why we deny his insistence every hour to "take it off." Jodee had the brilliant idea to collect photos that might explain the situation better. He seemed to understand but was slightly horrified when she showed him this:

Neither of us has slept much the last three days since she's taken on as much nursing duty as I have. Getting Liam to drink 5mL of Hydrocodone at 2am is a process akin to waterboarding and definitely takes two sets of hands. It will be nice for us both to have a reprieve.