For those of you who don't know, I recently tried comedy.

I'm not talking about fun stuff like Mortified. I'm talking about the thing masochists do when self-deprecation, self-verbal-abuse, self-hatred and self-flagellation haven't quite done the trick, so you decide to write some jokes and get up on a stage in front of a bunch of strangers and tell these jokes.

Ohmygod it's so hard. 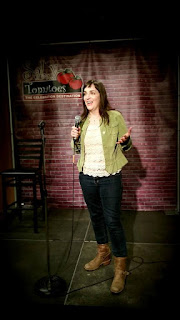 The problem is, I didn't realize this at first. See, someone convinced me to sign up for an amateur comedy contest called "So Your Friends Think You're Funny" at a place called Sally Tomatoes. Please don't even get me started on the names of some of these venues, okay? So I was like 'psh, sure, whatever,' and threw together a little routine. Turns out, the people and the judges liked it, and I got 2nd place. Woo hoo! One local comedienne in attendance said that I was "robbed for first place". Another comic said "Amanda Janik is going to have a very busy year." Yeah so, I got cocky. I mean, I'd literally never tried comedy before - I'd never even been in or even to an open mic - the closest I'd ever gotten to bonafide comedy was holding an imaginary microphone at parties when I'd had too much to drink and no one was listening to me, which I would fake-tap with the palm of my other hand, saying loudly, "is this thing on?!"

So I got invited to be in some comedy shows. I didn't know that this was a big deal, or that this is what the people who actually go to open mics and test out their jokes beforehand actually strive for. I was just like "oh you want me to be in your comedy show? I don't know, let me check my schedule...." I really liked that when you do a comedy show, you sometimes get money. Or in the case of the show I did in Healdsburg, wine!

I became friends with comics on Facebook and started to realize that I was running a super sham operation. They were out there, schlepping from city to city, room to room. 'Room' is, I learned after far too long, what you call it when, I guess, a comic has their own show. Wherever they have their show is called a 'room'. You're welcome: I just saved you from having to take this guy's classes. 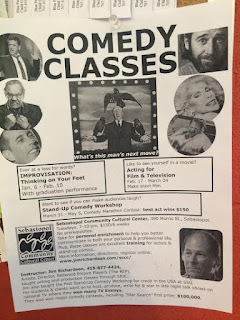 I did a few shows but it quickly became clear that I had to change up my routine. See, my original, second-place-winning routine was pretty heavy on the whole 'Stupid Shit My Boyfriend Says' material, and he was totally down with that - he's very giving and when we first started dating he told me that I was free to mock him and use anything he ever said against him forever and ever amen.

But then he said some reallllllly stupid shit and I made a publicly displayed comedy routine out of it, which he encouraged...but then watched a few times, sat through being publicly called out, and finally decided that maybe we should have a lil' sit-down.

I only had one other show after that because, really, how funny can I be if I'm not publicly shaming my boyfriend for the stupid stuff he says, right?! The show was at Christy's, it happened to be their last night open before a 'remodel' (read; rumored straight-up closing), so I decided to dress nice. I wore a sexy velvet dress, red heels, makeup. This, it turned out, was a mistake.

There were a bunch of foxy babes in the audience that night. By 'foxy babes' I mean desperate bachelorette party attendees in teensie rompers and hooker heels, and while I thought they would be a great audience for my bit, let's just say...they were not.

See, in my schpeel I talk about how my boyfriend thinks I need to lose weight. Yeah. And all of the fun things that come along with that, like breaking up, considering prostitution, etc. You know, the usual. This tends to be pretty funny and generally goes over well, if only for the "oh no he di-int!" factor. However, when I'm looking Super Smoking Hot in my sexy dress talking about how my boyfriend thinks I'm too fat boo hoo, the lasses in the first three rows weren't having it. They collectively sucked in their tummies a bit, having perhaps just settled into their seats after secretly cracking their backs in the handicap stall of the women's room because their heels made them want to die, all the while trying to keep their Spanx from rolling under their bellies every time they bent over to reach for their Lemondrop...and here was this naturally gorgeous, curvy, voluptuous, clearly-a-perfectly-fine-weight woman standing before them complaining about her boyfriend...this is how I imagine the inner dialogue went:


She has a boyfriend?! Look how much work I put into my appearance and I don't have a boyfriend and my stupid friend is getting married and I'm going to be alone and I hate this comic she's the worst I will KILL HER...gaaaaaah! Oh wait, and now she's making a joke about one time when she had make-up sex with her boyfriend in the handicap stall of the women's restroom?! Right where I just purged?? OHMYGOD!! I just got her toilet sex from a year and a half ago on my vomit-face!!"

Yeah so needless to say that audience didn't love me.

For the record, Paul was sitting way back at the bar and he said several people near him were laughing, but they were quiet laughers. And his ex wife was there, too! She said she was cracking up as well because she was agreeing with all of the things I said. "Yes he does clip his toenails in bed!!" It was suggested that she and I develop a comedy routine together but sadly she declined.

Anyway. Even though I know the main reason my last gig was a bust was because I was way too super-hot, I've decided I'm done with comedy. And it's not just because, while I made a record-breaking $10 to do the show, I spent $5 to get in, therefore grossing only $5 (math!!!).

It's because comedy is not for the weak, the lazy, the paranoid...aka me. 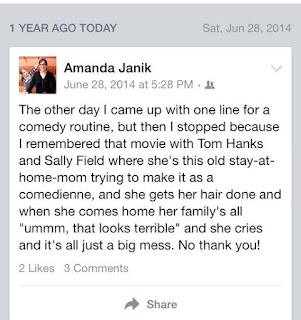 Apparently, I already knew that.
Posted by Amanda Janik