Since the beginning I've fantasized about raising the boys steeped in a rich winemaking tradition. 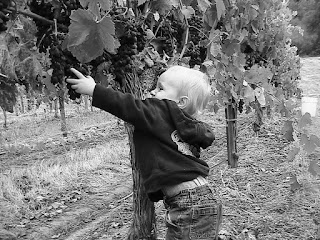 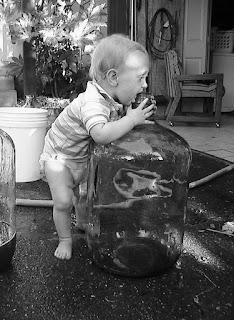 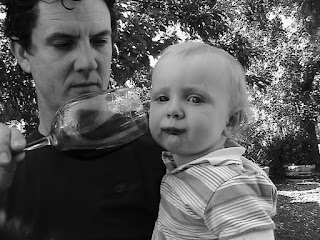 Like most first-born kids, Liam received the brunt of my overly-idealized parenting dream. It tapered off to a more appropriate level by the time Finn was born. I still involve them in my work, but not for the same reasons I did initially. Before it was more about sharing my passion with my boys and, hopefully, creating a legacy like the Gallos and Mondavis. Now I just show them the cool stuff I do because I like showing off.

One of the things I get to do is operate the hoist that dumps the two ton bins of grapes into the receiving hopper. It's even cooler than it sounds. With me working every day, Jodee has selflessly offered to look after Liam and Finn on my weekends. I convinced her last Saturday to schlep the boys to work for me so I could dazzle them with my incomprehensibly skillful hoist operation. Unfortunately Jodee and the boys showed up at the winery just a few minutes after we had dumped our last load of grapes and the truck had left. I brought them up to the crushpad anyway and let Liam see the remote that operated the crane. I even showed him how to operate it. We have the fancy kind that not only goes up and down, it also goes north, south, east, and west. I let Liam play with it for a bit. 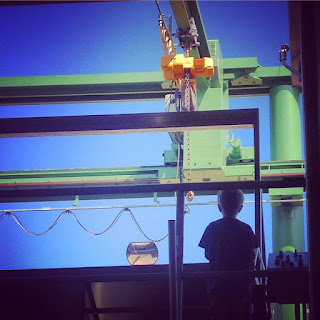 After a minute or two I thought, "even though the thing is twenty feet up and moving at two inches a second, this probably isn't an OSHA sanctioned activity for a 6-year-old," so I took the remote away.

Hell hath no fury like a first-grader denied heavy machinery. It started as just a run of the mill tantrum but quickly plummeted into a death-spiral of white hot fury. By the time I was strapping him into the car he was taking swings at me in between sobs. I just wanted him to think my job was cool but it was like I'd injected him with heroine.

After I got home that evening he asked me about it every 10 minutes. "Daddy, let's go do the grapes." I feel bad for exposing him to a little taste what's to come and then snatching it away, but, of course, I'm also pretty damn thrilled.

"We will go do the grapes buddy, I promise."