I thought Mike was exaggerating two posts ago when he said I'd disappeared. Then I did some tireless research (aka scrolling down a little bit) and realized that I haven't posted since late July soooo...yeah, it looks as though I've been slacking after all! Despite Mike's patented sneaky guilt-trip, though, I guess the most important question is: did you even notice I was gone?! I mean come on, there are lots of things happening in the world right now. Hearing about my dissatisfaction with my canned food collection surely can't be on the top of your entertainment options right now, can it? (Pun intended - Get it? Get it?!?!)

Actually it's true, our canned goods supply is seriously lacking. But that's not what has kept me away. How to even re-cap so you'll forgive me? I'll try. When did we leave off again...? Oh right, late July. Okay. So, since then:

- Jonah started freaking Middle School. I know! MIDDLE SCHOOL! Evie began 3rd grade and all that too, but seriously: Middle School. My mind, it is blown.

- A few days after the whole 'Middle School' thing, Jonah turned 12. So far he's handling it with grace and is still as awesome as ever, despite strangers' unsolicited and frankly unwelcome warnings that once the hormones really kick in he's going to become a wretched prick. I'm pretty sure this is a made-up thing because so far, so good. (Side note, I have seen firsthand the effect of hormones changing a sweet boy into a moody little punk, but that wasn't MY kid. I'm sure it won't happen to me....) 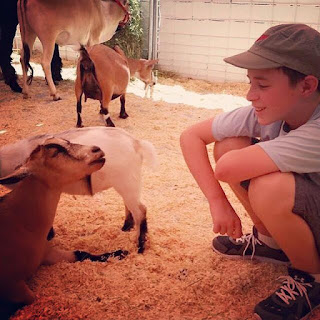 Jonah still does his chores without complaint and often on his own initiative, he still hugs and kisses me goodnight, good morning, hello and goodbye, and he still runs his new joke ideas by me, which are always surprisingly hilarious.

In a nutshell, he continues to be super rad, and surely will forever and ever, and ever. I mean, for his birthday he asked for a Ukulele. For his party he asked for a crepe bar. A CREPE BAR, people! Come on. How cool can you get?!

As I'm typing this I realize that I do actually have a lot to catch you up on after all! Hm. You know what? I'll leave it at that for now. My firstborn started middle school, turned 12, is learning to play the Ukulele, and loves crepes.

Thanks for your patience, friends. You're the best, most understanding, beautiful people in town. I mean it. Stay tuned for more updates - I'll be better from now on, I promise. Until I run out of things to update you on...or until Mike reminds me I've been slacking, whichever comes first!
Posted by Amanda Janik