Erin:  Hey, if you have to pee today can you do it on a Cheerio for Liam?

Erin: Yeah, they say that if you pee on a Cheerio it helps kids with potty training.

I tend to choose my battles carefully. I had no idea how me peeing on cereal was supposed to help Liam and I really didn't care to find out. Frankly I was afraid to even Google "peeing on a Cheerio" just because that's likely to yield some horrifying results, so I was ready to take Erin's advice at face value.

Liam is two and a half so for the past couple of months I've been making half-assed attempts at potty training him.  This past weekend I went about it with my usual reluctance but started to do as Erin had asked.  I took a fistful of Cheerios with me to the bathroom Saturday morning so I could pee on them, but I backed out at the last second.  I remembered that I tend to leave my bowls of cereal unattended and could see this new skill of Liam's backfiring.

I haven't been apathetic with the potty training because I have an issue with pooing like you might think.  At this point me and poo are like old college roommates.  I've literally gone about my business doing things around the house, fully aware of an errant poo smear on my body for a good hour before taking steps to deal with it.  I've been apathetic about the potty training because doing anything outside of the house with the boys is already enough of a cattle drive.  I really didn't think I could handle adding a toilet to their list of needs.  I could picture me at the grocery store with Finn chucking a dozen eggs in the beer aisle and having a complete meltdown because three of them didn't break and then having little Liam take that moment to tell me "daddy, I have to go bathroom real bad".  Scenes like that are the leading cause of head explosions. 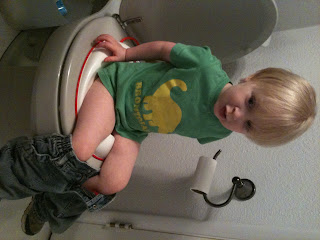 I never understood why parents bemoan diapers.  It's so nice to have your kids go whenever and wherever they need to.  Why would anyone want to lose that sweet perk?  But a couple of months ago Liam started showing signs of being ready.  He'd been waking up with dry diapers because he's been "holding it" while he sleeps and he's been making it very obvious when he's taking a dump.  About 20 minutes after meals he retires to the same little corner of the living room, back behind the couches, and makes his Uri Geller face.

After breakfast this past Sunday I really couldn't think of an excuse when Erin asked if I could go sit him on the potty.  So I attached his little Baby Bjorn toddler-ass-sized adapter to the toilet and we got comfy.  He pointed out his 'pee-iss' as usual.  "Your penis is awesome pal" I confirmed with total sincerity.  Then we normally would have read a book but since I didn't have one handy I made up a song to the tune of Raffi's Going to the Zoo:

We're gonna take a big poo today,
It could take all day,

That's public domain so feel free to use it.  After a mere three choruses of this Liam got a familiar look on his face.  I looked to see if I was holding a bent spoon but there was no spoon.  Instead, in the dark shadows beyond his little toddler crotch I spotted a movement.  A bowel movement?  I looked up at Liam's face and, I kid you not, he said "eww...".  This was of course followed by a distinct "plop".  Erin, who had rushed into the bathroom once I'd alerted her of the signs, joined me in cheering, laughing, and jumping up and down.  We were ecstatic.

I guess I was ready for this.  I really thought I wouldn't have wanted to reach this milestone just yet but I was just so damn proud of my little pooper.  Sure it's not over yet.  It will be many months before we can retire the diapers for good, but it's a start.  Plus I was excited because I was reminded that watching my baby boy grow up is bad-ass.  When he was Finn's age I felt like I'd be losing something when he started to grow up, but that just isn't the case.

Once we calmed down we paid our respects to his little floater and said "bye-bye" as it swirled off into the sunset.  I figure we'll have plenty more episodes like that in the coming months and I'm pretty sure the novelty will wear off pretty quick.  But until then we are ROCKIN' the potty!
Posted by Unknown