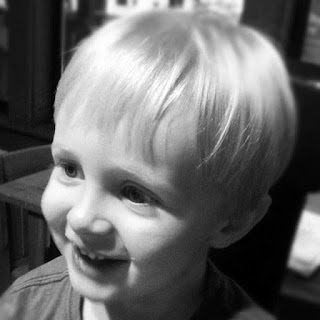 Yesterday I did my usual Monday morning Mr. Mom song and dance.  I got up, made a gourmet breakfast for Liam, he ate all the good parts, I ate the rest, and then we gathered up Finn and headed out to his preschool program Roots and Shoots.  When we got there I was stopped by the teacher who said I'm a shitty dad had recommended speech therapy for Liam.  She'd been contacted by the speech therapist to whom we'd been referred.  We had called the therapist two weeks prior and left a message about setting up a meeting but we'd never heard back.  We figured, "hey, she must have heard that he's brilliant and gifted and would be a terrible waste of her efforts.  Go Liam!".  But apparently the therapist had tried to call us but had learned that she'd been dialing the wrong number.  Evidently she'd misunderstood Erin's message.  Yup.  Didn't hear her right.  There's irony in there somewhere right?

Anywhat, I decided to start questioning this therapist's abilities.  I don't know anything about speech therapists' college but I think the best programs would be at the party schools....here's why: I had a brief stint as a bouncer at a popular bar in Davis (which if you know me is fucking hilarious) where I worked side by side with a deaf guy everyone called "Bish" because that's how he pronounced "Bitch".  As a result of spending six hours a night dealing with him and dozens of people so drunk they were hanging out talking to the bouncer, my ear became so well trained I could glean meaning out of the most muddled and incomprehensible speech.  That's training!  I once even listened to a drunken Welshman tell a joke and I knew when to laugh.  This therapist chick probably went to BYU or something.  Bah!!

I didn't share these concerns with the Roots and Shoots teacher because I'd also decided to pick apart things I didn't like about all these other "experts".  Like the fact that when I picked Liam up at the end of class he was doing one of the things that had the teachers concerned, which was "not participating in circle".  I tried to sneak in so I could watch this go down for a while but as soon as he sensed my presence he cried out "DADEEE!" and sprinted toward me like I'd just come back from the war.  It's a two-and-a-half hour class.  I'm wondering if he's really enjoying himself.  Seeing his reaction to me I thought, "Oh so he's 'not participating in circle', eh?  Like, he's not interested in what you guys are doing?  Funny, he can't get ENOUGH of whatever we do together at HOME.  WHATEVER it is!  I had him in hysterics yesterday doing dishes.  DISHES!!"


So I'm thinking he shouldn't go anymore.  In fact all these so-called experts have it wrong.  All he needs is more time with DADDY!!  YAY!!

Okay maybe I'm being selfish.  Am I fishing for excuses to keep him home?  I have to confess the Healdsburg Roots and Shoots program is pretty fantastic.  The teachers are great and they give him a nurturing environment where he gets to interact with other kids his age and do creative stuff that I can't duplicate at home.  Plus they really are helping us figure out if he needs a little extra help and I think he'll be happier as a result.  Whatevers.  So I'm probably confusing my desire to do what's best for him with my desire to spend my Monday mornings at home with him eating cereal bars in bed and watching How to Train Your Dragon.  But who says that isn't the key to lifelong happiness and success?  Yeah, it's probably more likely the key to living at home until you're forty.  I think if I had it my way he'd skip school altogether so that's probably not good.  Okay fine he can keep going.  I'll just practice fort building by myself for now and besides, summer is just around the corner.