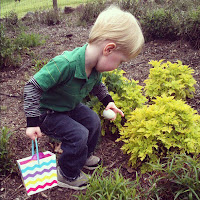 There's something about Easter that's always left me feeling queasy.  I start feeling it about a week before the holiday, just this general ill feeling.  Like 'The Christmas Spirit' but instead 'The Easter Nausea'.  Part of it has to do with the traditions I think.  There's the egg dyeing.  The vinegar along with that sulphurous fart smell combine to make a stink that's always tickled my gag muscles.  Then there's all the pastels and fake plastic everything. And of course there's the god-awful candy.  The crap chocolate eggs in foil, the chocolate bunny (the eating of which was always pretty gruesome), and Peeps.  My god PEEPS?!  And let us not forget the sweetened ipecac that is the Cadbury Cream Egg.  One year I got so sick after eating a couple of those I started hallucinating.  My mom says it was a fever and just a coincidence but I suspect that, along with corn syrup and ground grub guts or whatever that stuff is, the Cadbury's were lacing that shit with some kind of psychotropic drug.  The whole thing was likely developed by the British government for interrogating war criminals but had to be retooled since it violated the Geneva Conventions.

I also can't ignore my Catholic upbringing.  I shouldn't say it's a nauseating chapter of the Bible but the Easter story isn't nearly as heart-warming as the Christmas story.  There certainly aren't any Easter carols. 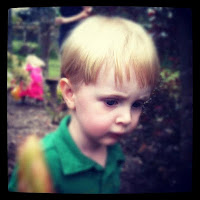 In our household we've streamlined Easter.  In the morning Liam got an Easter basket and later we did the Easter egg hunt at my aunt's house.  The Bunny was pretty generous this year but he needn't have bothered.  The single "Mater" die cast figurine from Cars 2 was enough to satisfy all of Liam's needs, including food and sleep apparently.  May-er has now replaced all other prized possessions in Liam's life.  This morning when he was forced to be parted with his precious toy for ten minutes he endured what seemed to be crucifixion-esque suffering.  Apropos. 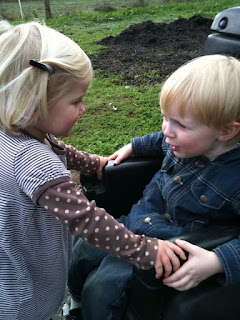 The pagan egg hunt took place in Sebastopol this year where along with Liam and Finn were five of their second cousins (i.e. my cousins' kids).  Second cousins are the best!  They're too closely related to you for any real romance to evolve (in California anyway) but not so close that you have to feel bad for having a major crush on them (yes, I'm speaking from personal experience).  Maybe it was just Spring in the air but I sensed a little second cousin adoration burgeoning between Liam and his impossibly cute cousin Noe.  That won't be weird for at least another ten years.

Finn spent the day doing his usual gig, bouncing on knees and drooling on shoulders.  Liam spent his time making a point of appearing to ignore Noe (so smooth) and wailing on the Easter egg hunt, but only after we agreed to let Mater ride in his basket.  He scored close to a dozen eggs, the contents of which were then mercifully eaten by me because Easter is, if nothing else, all about sacrifice.  My nausea should be subsiding any day now.