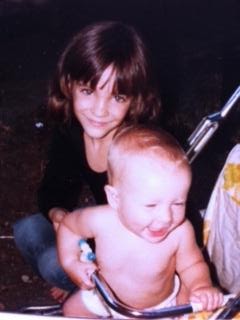 Chris - the oldest of my younger brothers - is a very gentle, soft-spoken vegan who wears old-man pants and bicycles everywhere. When I say 'everywhere' I mean to the grocery store, to the ocean, from Sonoma County to San Francisco, from Argentina to Peru. Places like that.

He grew up in a different, much cooler household than I did. There were things happening there like creative painting of the walls, experimental cooking, and sitting down for family meals. He grew up in Kalamazoo in a funky old Victorian house, whereas I grew up in a dog-pee infested crumbling old farmhouse 30 minutes away in the small farming town of Gobles.

I had a rigorous chore schedule and strict rules, including a midnight curfew on weekends, after which I always had to wake up my mom and let her smell my breath so she could decide if I'd been drinking (um, toothbrush, duh!). In contrast, our dad gave Chris and our younger brother Ben only three rules to abide by for a peaceful household:

3) Don't Get any Girls Pregnant

I didn't think this last rule would be much of a problem for Chris. As a kid he used to insist on wearing his older sister Erin's purple sparkly one-piece bathing suit. He looked really cute in it! One year for Christmas, my step-mom was fretting over whether to get him the girl cabbage patch doll he'd asked for, or a more gender-appropriate boy. She asked for my opinion, and because I knew way more about boys than girls, I suggested the boy. Girls were weird. She got him the boy, and when Chris ripped off the wrapping paper and saw what was inside, he went nuts. The kind of nuts you go when you're disappointed and ANGRY. He cried inconsolably about it and threw the boy doll across the room.

As an adult he came to stay with us for a few months, so I sat him down to have 'The Talk'. I assured him that it was totally okay if he was gay, but he insisted that he wasn't. Again I told him that I loved him unconditionally and having a gay brother had always been one of my dreams, he could finally make it come true! Having a gay brother would complete the well-rounded, all-accepting, colors-of-the-rainbow thing I'd been working on for years by acquiring friends and family members from a variety of social and ethnic backgrounds. He would slowly shake his head and say in his very mumbly, muted way that he was not, in fact, gay. Great. So what's the point of having a Korean sort-of brother, a Mexican soul sister, one black and two Chinese friends?! Jeez! Oh, right, because I love them all so darn much...okay, fine.

I guess I kind of believe Chris now about the gay thing now.  He's got this really rad girl that he's engaged to.  She's tough as balls and would never date a homo, let alone marry one. They've been together for enough years at this point that she would have figured it out by now, too.

I've long-since forgiven him for all the hours he spent silently following me around the house, just as I'm sure he's forgiven me for whipping around and screaming "STOP FOLLOWING ME!!!" at him. I've also forgiven him for moving from San Francisco to Madison, Wisconsin. I know! I know. Who in their right mind would make such a geographic switch?! I've been asking myself that a lot over the last couple of years.

The kind of person that grew up dressing like a girl, that's who. This kid does whatever the fuck feels right to him. He is awesome.

He's cold and I will never visit him in the winter, but he's awesome.
Posted by Amanda Janik