The other day I sent a text to my sister-in-law, asking if her oldest son would be home from college for Christmas. Every year I send this family a box of tasty treats from Trader Joe's just for fun. They all have insane sugar addictions since they're Mormon and aren't allowed to be addicted to anything else. Since I like to be an enabler whenever possible, this is my one shot. I like to put my own somewhat-healthy spin on the sugar-pushing though, so I send unusual things that they likely won't find in the very small Midwestern town they live in. Chocolate-covered edamame or candied mango, for example.

After establishing who I was (I guess she doesn't keep me in her phone. Hmph, whatever) and what I was preparing to do, she said that he would indeed be home, but "we do not deserve goodies from you, I can't even get around to acknowledging your kids bdays despite best intentions! Grrrr!"

Rather than stand there in the frozen food aisle of TJ's and one-finger text out the reply I wanted to, namely "since when is giving for the sake of knowing it will bring a smile to my loved ones' faces something that is 'deserved' or not based on what you do or don't do for me in return? Um, hello? 'Spirit of giving' ring any bells? Not sounding very Christian right now!" I instead said "deserve, deschmerve" and happily continued my shopping. Tra la laaaa!

Fast forward a few days. The kids and I had a super-fun all-out art show/craft fair weekend, looking for things that might catch our eyes for gifts. At one such event I saw something pretty cool, and sent a text to my boyfriend to ask about it. I'd recently come up with the genius idea that since we're a 'couple', we can give gifts from both of us. This eliminates a ton of hassle and extra money. Just wrap something thoughtful and fantastic up and slap a tag on that says "from Papa AND AMANDA." Like I said, genius. 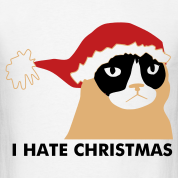 So I texted him that the tough part about trying to find the right thing is that I'm never quite sure what his kids will like. His response: "Yeah. That's a fun idea but probably won't work in reality. You don't need to get them anything, they won't get you anything most likely. We don't really get into that gifty thing much."

This time I did take the time to stand there among the crowd, one-finger texting him back, basically to say "fuck off. I don't give gifts just to get gifts, that's not the point, dummy, and p.s. thanks for totally bumming my ride." (I don't think I said most of that, now that I think about it). Anyway!

I'm starting to understand why people hate Christmas so much! Of course it sucks if you look at it as this big obligatory burden. Oh shit, now I have to buy something for that person because they bought something for me...how awkward, what to get...what to get...I hate this! Or god I've really flaked on keeping in touch with that person, I wonder if they're going to get me something. Dammit, does that mean now I have to get them something, too? What to do...this sucks! I HATE this time of year!

I used to get wrapped up in all of that bullshit, too. But mostly only if I had to get something for a person I didn't know very well - like an aunt who decided to unexpectedly visit at the last minute, and I'd never actually met her before. But really, overall I love Christmas. I love the whole dang season! The parties, the spiked hot cider, the roaring fireplaces, the jingling horse-drawn carriage rides, the smell of thousands of dying pine trees in the air...that particular holiday 'feeling'. There's just something sparkly in the air, and I want to enjoy it and share it with the people I love! If they'd stop being such fucking downers all the time.

Isn't there some old saying like 'To Give is to Receive'? That's how I feel. If I'm giving you a gift it's because something about it made me think of you, and I like you, and it makes me feel kinda happy to give it to you, even if you think it's stupid. And guess what? I don't expect anything in return.

So listen - get over it, people! ENJOY CHRISTMAS! Stop whining about all the shit you have to buy (says who?!) and how busy you are and how all of this just sucks so much. YOU are making it suck, just so you know. And I'm not going to let you ruin it for me. Not this year.


*If you really want to hate Christmas though, you can find the fat cat shirt claiming as much here*
Posted by Amanda Janik