With the rainy season winding down I figured it was just about time I scrambled onto the roof and cleaned out the gutters. The cool thing about cleaning your rain gutters in February is the leaves have all decayed and become a kind of pulpy-grainy-dense mud. Most of this has to be scooped out with one hand while cursing, but a small portion can just be smooshed through the rusted sections that have cracked and split open.

I'd gotten three quarters of the way around and was working on a precarious corner when I caught a movement in the corner of my eye. A small, chubby, flannel-jammied movement.

It took me a split second to size up the situation. Erin, most likely feeling guilty knowing the father of her children was risking life and manicure on a nasty job, decided to do some chores around the house herself. She sent the boys to the back deck to play but didn't check to see that the side gate was shut (I was later blamed). Finn, discovering this, decided it was his chance to really stretch his legs and was bolting toward our busy street with his arms tucked up, sprinting forward, mouth open, looking oddly like the T-Rex from 'Jurassic Park'. 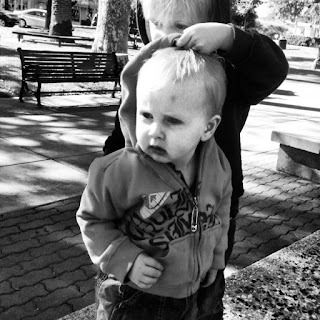 Option 1: Find a soft spot to land. Soft enough that you'll at least have one working leg after impact. The bark mulch doesn't look too bad. There's the half wine barrel with the dead lavender. That would shorten the fall by a foot and a half but that's pretty far. You could dangle from the edge of the roof first but there's no way that rain gutter is going to hold you. Why isn't that thing in better shape??!!

I went with option 2 while contemplating option 1.  Erin didn't hear me but Finn did and thought it was hilarious. Fortunately, the neighbor across the street also heard me.  She sized up the situation even faster than I did, but to be fair my blood-curdling screams were a bit of a give away.

I sheepishly thanked her and called Erin on my cell to "please come and get Finn".  "Oh shit!" Erin said and dashed out to the front yard to do some sheepish thanking herself. I guess I could have first told her on the phone that Finn was fine, but I'm a vengeful bastard when my pride is hurt.
Posted by Unknown