Wait, wait...is Valentine's Day over? Dammit. I totally missed it.

After last year's miscommunication over how I felt about Valentine's Day (as in, I thought I'd at least get an It's It, but...I didn't), and several warnings from my sweetheart about how he hates all the commercial hullabaloo that surrounds the day, I was determined to make the day my own. I'd initially said that we didn't need to bother doing anything, but then I thought about it: what's wrong with a day dedicated to showing the person you love how you feel about them? The Hallmarkiness can be ignored, but the holiday itself isn't going to just go away. So why not make it just a tiny bit special - minus the shiny boxed crap candy and overpriced carnations? A home cooked meal, some daffodils ripped from the neighbor's yard, and a bottle of bubbles are all easy enough. I started developing a speech about not being a Valenscrooge, and "if you did shit like this all the time* it wouldn't make me want it on this one day...but would it kill you to just give me this one day? Just this ONE DAAAAAY?!?!" Luckily I didn't get a chance to throw that tantrum.

Instead, I woke up at 4:30am on The Big Day after a night of gluttonous guilty-pleasure snacking with girlfriends. When I woke up in the wee hours, I didn't feel so well, but I assumed it was the overindulging.

Turns out, it was the stomach flu. 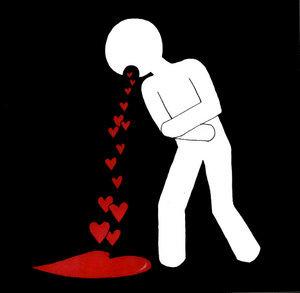 After I'd seen the other side of snacks like red licorice and chili con queso nacho cheese dip, I emailed my boyfriend and said "I just threw up SO MUCH!" Then I collapsed into my bed and passed out into a fever-riddled sleep, only occasionally waking for more vomiting.

Luckily I managed to get all of the unpleasantries out of the way before I had to pick up my kids from school the following afternoon, but the lack of eating and all of that sleeping had left me exhausted. The kids were given strict instructions to watch as many movies as they wanted, and I settled in on the couch with my book so as to appear at least somewhat involved.

To make up the lazy Friday afternoon and Saturday morning to them, we went to see some music at the Hootenanny on Saturday afternoon, and then had a big huge beach day on Sunday. About 20 minutes after we'd arrived at the beach, Evie climbed into my lap. Mother. Fucker., I thought. If this kid ever stops moving, it means she's sick. After an hour or so of lap time, she and I retired to the back of Paulie's truck, where she napped for the rest of the day. Once home, she napped more - almost straight through until 6 this morning, in fact, at which point she threw up, slept for another hour, and then got up asking for an egg pancake. I was so thrilled that she was hungry I almost didn't notice that her egg pancake had self-formed itself into a sweet heart shape.

But I did notice it. Which reminded me of the time the same thing happened the first time I made breakfast when Paul and I were in Hawaii. Which made me think of Paulie, and hearts. Which made me realize that I'd totally missed Valentine's Day! By five days! Good god. 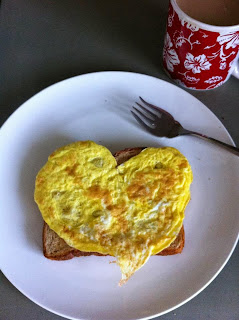 Then I realized that my boyfriend probably thinks he's off the hook since I was sick and delirious on his most-hated holiday.** That man has another thing coming, oh yes he does. I'm chilling a bottle of Domaine Carneros right this very second that I will force him to share with me while eating cheeses and breads and other delicious frivolous snacks as we cuddle on the couch watching a romantic comedy of my choosing on an evening when I've shaven my legs and put on underwear with no rips, weird stains or malfunctioning elastic in them.


* To be fair, we do cook a lot, and we drink a lot of bubbles. But not with any sort of doe-eyed romantic intentions; just for the simple purpose of carrying on the important functions of eating and drinking bubbles.

** I can't confirm that this is his most-hated holiday. He seems to hate all of the holidays. Except for the ones I hate - he likes those.