Dancing Around the Stars

**SPOILER ALERT: If you have never seen the 1987 vampire hit The Lost Boys, and plan on seeing it some day, DO NOT read the third paragraph of this blog post. You have been warned. Proceed.

I have this thing about celebrities. It isn't your usual 'small town girl gets starstruck' kind of thing. It's more that whenever I get the chance to meet someone famous, I try to be super chill around them and treat them like normal people. The only problem is, what actually ends up happening is that I come across as kind of...an asshole. 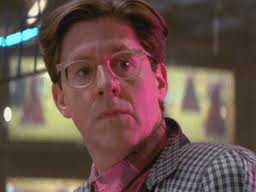 Take the time I was a hostess at Big Boy in Paw Paw, Michigan. Who should pull up in his fancy-ass vintage car but Edward Herrmann and his surprisingly beautiful family. They strode inside in all of their beautiful-rich-people glory, and I made a point to very casually take them to their booth. I didn't even give them special treatment by offering them a big booth, either. (They asked for one anyway, of course. Everybody wants a big booth at Big Boy).

After they'd enjoyed their meal of gravy-laden goodness and were paying, I decided that I couldn't resist: I said "umm...I'm sorry, but aren't you...." He chuckled a little and said "from the Dodge commercials, yes." Seriously, Ed? Who the fuck cares about Dodge commercials?! I said "no, from The Lost Boys." I added "you were the head vampire?" as if maybe he'd forgotten and needed reminding. He looked at me as if I were a tad 'touched' and then turned to walk away. Before he got to the door I blurted out "you do realize you're parked in a handicap spot, don't you?"

Fast forward about 5 years. I'd moved up a bit in the world and now hostessed for Roy's at Spanish Bay, a schmancy golf resort in Pebble Beach. I learned to ignore all kinds of famous folks there: Clint Eastwood, John Travolta, Matthew McConaughey, Don Johnson, Doris Day...all kinds. But one evening, Damon Wayans came in. He'd been around for a couple of days and had gotten a bit friendly with some of the staff. Not me, mind you, just the pretty and handsome ones. The ones without cold sores. 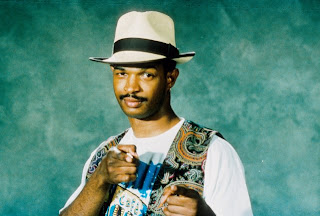 He sat at the pizza bar, which was right by my hostess station. Various co-workers stopped to chit-chat with him, or cruised by to give him a high five. Needless to say, I wanted in on the action. I also wanted to somehow make it clear to him that wearing sunglasses in a dark restaurant at night looks pretty ridiculous. Luckily my common sense took over and I decided he might not appreciate that feedback. Instead I sidled over to him and said "hey, whassup."

He asked my name, we shook hands...everything was going great! Then my mouth opened and it said "so, I don't know how to tell you this, buuuut...I'm way funnier than you." Wha?! Where the fuck did that come from? I mean sure, it was true, but still!

He lowered his head, turned his ear toward me, and said "excuse me?" Let me say here that when given a chance to fix a mistake, I always don't. "Oh, you know, I just said that I'm funnier than you." He thought about this for a few seconds while I watched my distorted reflection in his sunglasses. I started sweating profusely in my polyester Roy's uniform. Finally he said "okay, tell me a joke." I did not expect that. So I said "huh?" and he repeated "tell me a joke." "Oh," I said. "Okay, I will! Um, right after I answer the phone!" As I ran away toward the safety of my hostess station, I could hear him saying "what? That phone ain't even ringin'!" but luckily I put up the act long enough that he eventually just shook his head and turned to high five a passing waiter.

Things haven't changed all that much in the nearly 15 years since then. The other night I was out at Christie's to see a friend's band play. Early in the evening I'd spotted a man sitting at the other end of the bar. I then spent a good twenty minutes telling Paulie that he was the guy who'd last done my nails, and how he'd done a terrible job, and he was obviously totally gay but pretended he wasn't by acting horrified by the music of Elton John. (Paulie is very patient with my rambling stories). Why I chose to then go up to this man after a couple of drinks is a mystery to me. But I did.

Learning from all of my past embarrassing mistakes, I was determined not to geek out when I met Retta from Parks and Recreation the next night when we performed at SF Sketchfest together for Mortified. I did a pretty good job, too. We chatted about the late hour, how tired we were, and other normal-people small talk. She told me I look like Tina Fey. I heard her laughing during my bit, and later she told me my piece was hilarious. I knew we'd be Best Friends Forever!! But I told myself I would not, under any circumstances, ask to have my picture taken with her. She just wants to relax! I told myself. She wants to be able to just hang out without being harassed by a fan. Or, especially by a peer, which technically I am now, right?

I continued on with this internal dialogue until I was interrupted by another Mortified reader and then a member of the band asking Retta if they could have their pictures taken with her. "Ohmygodmetoo!" I almost shouted. Then I remembered the whole be cool thing, and I tried to backtrack. "I mean, I wasn't going to ask, cuz, I figured you must, you know, get sick of it, but...." She laughed and said, "it's totally fine, I do this all the time."

Since Retta is the only celebrity I've ever met that I was not an asshole to, I'm thinking I left a good impression. She'll probably call me up soon so we can hang out more.

I'm sure that at the very least, she'll sort of remember me. I'm pretty sure.