So things have been kinda shitty lately, I've got to say. I thought it was just the alignment of the planets, but Nope! It's just my life! Weeeeeeee!

I had some unexpected car repairs to deal with. Business has been slow. Mike's being kind of a cranky bitch. Needy, too. The rent in my building is being raised. I had to shell out a shit-ton of money that I didn't have for something that wasn't my fault, so now the trip to Michigan I'd been planning for the kids and I is on the chopping block. The weather has been all "I'm gonna be cold and rainy! Now I'm gonna be hot as hell! Now I'm gonna be super windy! Now I'm gonna be all three in the same day so you can't leave home for a simple walk without sunglasses and a sweater, chapstick and an umbrella just in case, hahahaha!" The weather can be such a dick sometimes! Also, Paulie and I broke up. So, there's that.

No no, it’s okay...I know the blog has suffered in the year and a half that we’d been dating, so really, it’s for the best. Now I can commit myself to just writing about whatever it was I wrote about before I fell madly in love with a man who was perfect for me in almost every way. That gets super boring for you, amiright?! I'm just assuming you all feel this way, as a fan once told me "people don't want to hear about your perfect relationship all the time. And by 'people' I mean me."

"But WHY?!" you ask. To which I say: shut up and mind your own dang business! And then I remember, oh, I've been telling them my business for a couple of years now. I guess I can't stop now. Okay then: we just wanted different things. That's pretty much it. Neither of us did anything terrible - unless you count being so fucking incredible and awesome that no one will ever quite compare to the magic that was created. Because in that case, we're both guilty, heh heh. And we are both aware that we will now likely die miserable and alone wishing we'd never had the stupid idea to let the other go (or, I will - he will until he meets the perfect stripper). But hey, that's life! OPA!

The good news is, he has always given me free reign with my writing. Sure, I generally try to quote him close to verbatim, so there usually isn't any twisting or manipulation for the sake of the story necessary, but when we were dating I would at least filter on his behalf.

And wait! Look on the bright side: I finally didn't get dumped for another woman, via email, or over the phone! Does that mean I can knock one of those off of my relationship resumé and replace it with this? Yesssss!!

So, the problem is, we still really love each other as people and friends, and are trying to figure out how to not be a couple. It's surprisingly difficult. In the meantime, we're hanging out doing lame things like talking about our feelings and musing about how this stupid break up has affected us so far; then normal things like going out for burgers and gelato.

So if you see us out and about, not making physical contact but staring into each other's tear-filled eyes while the bubbles in our champagne start to disappear and our plate of oysters gets warm, pay no mind. We'll be okay. We will. I'm pretty sure. At least, that's what he keeps telling me. We'll be just fine. I mean it.

And if not, well, I've always got my friends: 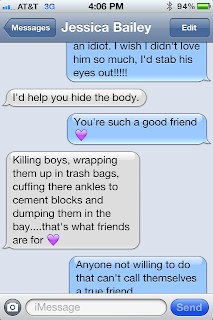