Every once in a while, Jonah and I get to hang out sans little sister. Usually we only get a few hours - I pick him up after work, we have dinner, then bed, then up and back to his dad's before I go to work the next day. But a week ago we got a whole day. And it was the Best Day Ever.

Jonah requested a bike ride, so I used my amazing Tetris skills to get my bike out of the storage closet it lives in, and away we went!

A few seconds in, I heard Jonah giggling a little behind me. Then sighing. Then he called "I'm so happy right now!" to which I replied, "me toooooo!"

We rode around downtown, zig zagging through the quieter streets, until Jonah saw a sign that caught his attention and shouted "Mom! There's a book sale!" I didn't register this at first because I was trying to veer around an asshole who'd pulled into my lane and appeared to be camping there for a while. "BOOK SAAAAALLLE!!!" Jonah shouted again, and this time he got my attention. We doubled back, parked our bikes, and went inside. I immediately began piling books into my arms while Jonah perused on the other side of the room. I've always been a sucker for a book sale, so I was relieved to only  have space for a few or eight in my bike basket. The added weight made me nervous because my bike has old crumbling tires that are ready to explode at any moment, but whatever. All those books would have made exploding tires completely worth it. I paid and then off we went - book-rich and hungry. 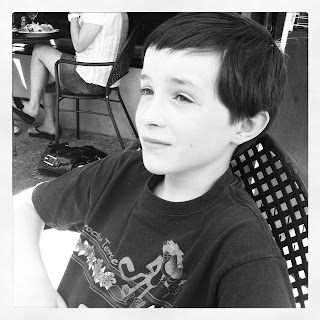 We had lunch outside in the glorious sun, watching pollen rain through the air and cover everything in sight. Jonah scooched his chair as close as possible to mine and kept rubbing my arm, saying *sigh* "I love you mom." He is the absolute sweetest kid, ever. I'm so glad I made him.

After lunch we played in Courthouse Square until Jonah asked if we could go to Treehorn Books, where they have Tin Tin comics he likes to check out sometimes. He also asked if Paulie and Finn were free to hang out with us, so they rode over and met us for some book browsing and then, of course, some Gelato.

We rounded out the day by forming a super cool bicycle gang and heading to Paulie's, where we played Settlers of Catan (which I amazingly lost! Jeez. First time ever), and Jonah was thrilled to squeeze in some Minecraft time, which he generally never gets from me. He was pretty pleased, to say the least.

Bedtime was a bummer,  because it meant our day was over, but the hugs and kisses and his request for me to sing Twinkle Twinkle may have been the most heartwarming thing, ever. How much longer will I get this unabashed adoration from him? I'm going to enjoy every minute.

It was a good day.

(Also, I can't figure out how to get my bike back into the storage closet).