There's a secret happy side to co-parenting: When you're with your kids you're really with them. You can focus on them and just them, and leave all other concerns for another time. When you're not with them...well, GOOD GOD you get to do whatever the hell you want!

I experienced the latter this weekend and had an old high school friend up from San Francisco with an entourage of adorable queers. We went wine tasting (of course) and ended our day at the very north end of the Dry Creek Valley at Bella Winery where, not by coincidence, the greatest duet in the world was performing: The Paper Dolls.

Amanda and I discovered these girls two years ago (almost to the day!) and ever since then I've been kind of following them like the Grateful Dead (dollhead?) I'm their number one fan in the greater Sonoma County area...or so I thought.

While my group was getting hammered tasting wine, I was hanging out close to the band giving them my "I totally love you guys but not in a way that should make you uneasy" vibe. They said "hi" to me in between sets because they take my attention in stride even though there's something inherently creepy about a man my age liking them so much. I joked about being their #1 fan and they revealed that I had competition.

Yeah! Some little two-year-old red-headed sweetheart was stealing my thunder! Her face was painted like a kitten and she was in a little white dress (after Labor Day...please). 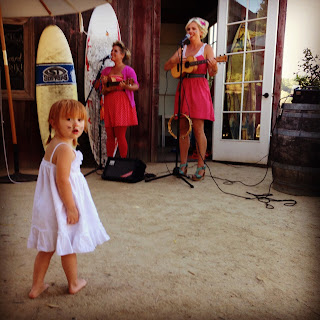 This was tough competition. She was cuter and more age-appropriate than me by a long shot and she was bringing the "When I grow up I want to be just like you" vibe. I didn't stand a chance.

I tried bringing my A-game. I thought some hula-hooping might score me some points with the whole "I'm nostalgic for pin-up posters and The Anderson Sisters" vibe. 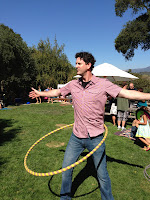 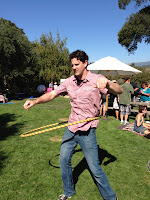 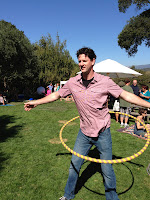 I think it did more harm than good. My ginger nemesis pitied me. 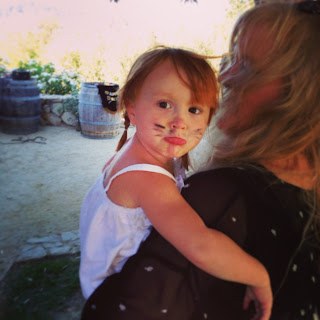 One would think being destroyed in a public "fan-off" by a toddler would destroy a man's pride, but I bowed out gracefully. I think that I'm at a point in my life where I no longer underestimate the power of toddlers.