It is a happy coincidence that my weekend with the boys coincides with payday. This means that the Friday evening when I pick them up, I am at my wealthiest. This also means that the few days leading up to this day I've been subsisting on peanut butter crackers and raw spinach, so PIZZA FRIDAY it is!!

Pizza is of course a bachelor's staple, but don't get all opinionated and start thinking I'm some kind of loser father that only orders out pizza for my kids because that simply is NOT the case. Sometimes I'll heat up a frozen one from Trader Joe's.

Last Friday was payday, kids day, the first day of autumn, and the first rainy day of the season. Any one of those would be enough to justify a pizza night; all three at once requires it. So we phoned in our order to Mountain Mike's and were informed of the usual "20 minute" wait time. We arrived 25 minutes later just to give them a little lead time and to allow a few minutes for the pizza to cool to a safe temperature (it is a fact that waiting for a pizza in hand to cool before eating it, is impossible.)  We were unceremoniously told it would be a few minutes. I instinctively looked up at the ceiling fan and noted that it was shit free. This was quickly remedied.

Finn was content to do a few laps around the dining room, but Liam had been told there would be pizza. 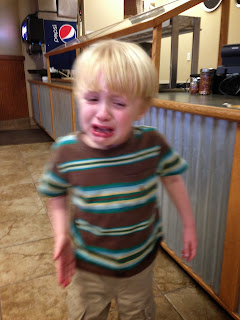 "Yes, pizza, it's coming buddy. It's just not ready yet."

"It'll be just a few minutes. Do you want to go outside?"

If you're ever frustrated by poor customer service and want to exact a little revenge, nothing beats the screams of a disappointed preschooler. I thought the best thing to help Liam cope with his pain was to allow him to just let it all out. At one point the girl working the counter was so overwhelmed she disappeared into the kitchen which prompted Liam to stretch his little arms across the counter, hands grasping desperately for his promised pizza, while he triple the anguish in his cries for "PIIIIIZZZZAAAAAAAA!!! PIIIIIIIIIIIIIIIZZZZAAAAAAAAAAAAAAA!!!!!!!!!!"

Eventually the owner came out. "There was some confusion and it's going to be a few more minutes. Can I get you a soda or something?"  Liam was perched on my hip looking like a baby koala bear who lost his mother, while Finn was tucked under my right arm like a piglet having a tantrum. "No thanks, I'm good" I told him. It quickly became clear that they hadn't even started our pizza until after we had arrived. I'm a low-maintenance customer but a heads-up to this fact would have benefited everyone involved, especially the other customers whose pizzas came out before ours. Liam was sure to let them know that they were cruel, heartless bastards for denying a starving child their pizza.

We left 20 minutes after we had arrived with pizza in hand and pride destroyed. Liam's recovery was swift. 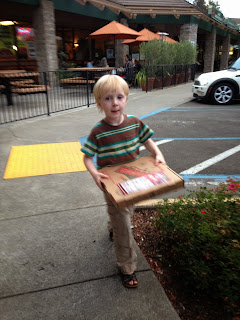