Yes, I went out with Amanda this past weekend...I think I'm in love.  I guess I should say more in love......with my wife after an evening like that (rimshot!).  Our date night almost didn't happen when I innocently asked "is this just a platonic date or should I manscape?"  I was just trying to feel things out.  I think I was also trying to scare her away because, as sweet as the invite was, I kind of wanted to stay home.  My wife and son had gone camping and I had been left home alone owing to the fact that September is the beginning of harvest season in the wine country and I was scheduled to smoosh some grapes (no one gets days off during harvest but sometimes Amanda forgets the rules).  I wasn't exactly heartbroken for missing out on camping. This was real camping, not Camp Tuolumne camping, and real camping is just something I don't get.  If you're going to sit around drinking, eating, and playing cards all day why not do it at home where it's less dusty?  I know "nature" right?  Yeah nothing says unspoiled nature like a Mendocino County campground.  Oh look honey, tweakers in their natural habitat!!..and is that banjo music I hear?  Anyway, dragging my ass to Berkeley wasn't how I intended to spend my Saturday night (I was planning on getting drunk on homemade wine and watching all five Star Wars episodes....yes, there are only five)  But Amanda played the guilt card like a pro and I'm glad she did. 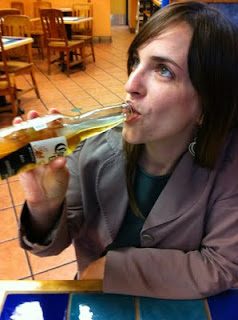 It started with a pretty flawless plan - Fish Tacos, beer, Mortified, and beer.  I was impressed with Amanda who in an utterly un-girl fashion got home from work and in something like 15 minutes was ready to go before I could raid her cupboards for booze and accidentally find her sex toys while looking for stationery.  Even though getting off of work at 5 and having to be at a show at 8 meant NO ZACHARY'S PIZZA, I did at least get to be near Zachary's and could sense its aura (I'll probably have to blog about Zachary's Pizza some day but it won't be because I name my future son Zachary...Erin already said 'no')  Rubio's was a good alternative and it kept us on time (hmm...Rubio Bairdsmith?).  The show was at The Down Low on Shattuck which is a cool venue but I had to admit I felt a little out of place having forgotten my keffiyeh and fedora back at home (I still can't find skinny-jeans in a 36" inseam, BLAST!)  The show consisted of 5 people taking turns reading from notes, journals, short stories, and songs they had written at the peak of their adolescent delusion and confusion.  Great stuff.  I was in tears.  I didn't see much of Amanda at the show.  She was giving off the 'recently divorced' vibe and it was attracting attention.  I for one want nothing more than for her to be happy (i.e. 'get some') so as soon as a cute guy struck up a conversation with her I made my way quietly to the third-wheel section with the other platon-o-pals and lesbros.

After the show Amanda was down to hit the Berkeley bar scene and I was the one making the 'meh' noises, ME!?!?  Mr. Last One Standing!?!  Shameful, but in my defense drinking would have meant stumbling to my parents house to crash in the guest room for the night and I just didn't trust Amanda that much.  So instead we drove home BUT we stopped off at the greatest little pub this side of the pond, Toad in the Hole.  Not only was there Guinness on proper tap but there was an unexpected and total night-making surprise.  There were these two girls there who looked like pin-ups but sounded like the Andrew Sisters performing cover songs a la ukulele.  Things like Prince, Michael Jackson, and Bruce Springsteen...but AWESOMER!!  They sounded amazing and they call themselves The Paper Dolls.  I guess they play at Toad a lot so check them out, seriously.  I love them.


Okay so there was no real point to this post I guess.  I was going to do a thing about "the best part of a trip always being the part you don't plan blah blah blah" but now I'm just kind of planning my 40th birthday party or some other event where I can hire these girls to perform.  I'm serious, they're that good.  This was about my "date with Amanda" but I guess you can see how it ended.  I think she got home safe.
Posted by Unknown