Liam is a curious guy who adores animals. He is currently fascinated by sea creatures and is quite fond of dolphins and whales (Liam is a modern day Jacques Cousteau)

He enjoys movies, playing with balloons, doing puzzles, going to the park, water play, eating popcorn, and looking at books in the quiet corner (Liam would make a kick-ass roommate)

Liam uses sounds, gestures, and 1-3 word utterances to communicate. He often echoes 1 word utterances to have his wants and needs met (a teacher asks "do you want bubbles Liam?" and he responds "bubbles") With verbal cues and prompting, he is still working on using 3 word sentences to make requests "I want pizza" (Liam is enlightened. Not only is he aware of what truly matters in life (i.e. "bubbles" and "pizza") he also understands the virtue of verbal austerity)

Honestly, what's so desirable about a chatty preschooler? The other day was my day at the nursery school and one of the kids Liam's age ran up to me all excited and said, "Last time....the last time I rode my bike...I was riding my bike home..and my brother...there was...I saw A WORM!"

I said "Really? Wow!" but I was thinking my god that is the lamest anecdote I've ever heard. 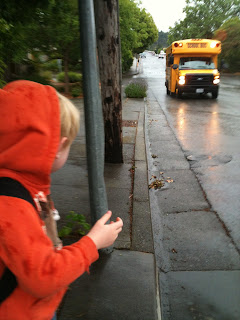 Liam has been going to two schools for the past year. One is his mainstream nursery school where I hear harrowing tales of worms, detailed accounts of breakfasts, and lots and lots of tattling. The other is Liam's special education class where he THRIVES.

It was about a year and a half ago when the experts were furrowing their brows in my direction with regard to Liam's development. At first it was just that he needed speech therapy and that I shouldn't worry (I worried anyway). Then it was that he wouldn't interact with the other kids but there was no need for panic (I totally panicked). Now they're saying they want him assessed by a psychologist to see if he's on the "spectrum".

Ah yes, the good old ubiquitous autism. Nobody knew it existed until Rain Man came out and now every kid's got it. Last year it was caused by vaccines, this year it's fluoride in the water, and next year it'll be Honey-Nut Cheerios or something. I don't want to editorialize about the subject too much but it's hard not to. I will say this, the experts seem to have no clue what "it" is and I certainly don't either. I don't know if his issues will be something he struggles with for a lifetime or if he'll be "mainstreamed" in a year or two. Ultimately it doesn't really matter to me anymore. Liam is who he is; happy, healthy, and hilarious. Fundamentally, I wouldn't change a thing about him. 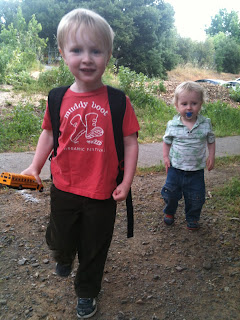 It's not that I don't still worry, every parent does I think. In the beginning there was more panic and denial, but now I just really want to learn as much as I can about his difficulties and what's the best that can be done for him. The teachers and Erin and I decided during his IEP meeting that, for now anyway, the best thing is to pull him out of the regular nursery school and have him attend only his special ed class five days a week.

So Liam is riding the short bus full time. In the next few weeks the "specialists" will evaluate him and most likely assign him a fancy acronym that nobody understands and won't really change his education. With Kindergarten looming around the corner it's an exciting time to watch him progress and see his potential blossom. Sure there's still that nagging worry that all of this could one day impact his happiness, but kids are great at teaching parents how to live in the now, and right now I couldn't be more proud of him.
Posted by Unknown