In this new year I've had to change my "tax status" and I'm wondering if I can, in good conscience, list myself as "Head of Household." Any auditor witnessing life in the Bairdsmith Bachelor Pad would quickly see that's not the case. For example, even though I insisted firmly that it was time to take down the Christmas Tree, I couldn't take any action until Liam gave me his blessing. After some debate he allowed it on the condition that I used the Christmas lights to decorate the TARDIS. 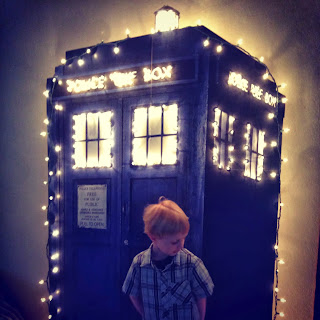 At no time is my indentured servitude more apparent than at breakfast time. Monday was a typical morning:

"It's eggy basket! You love eggy basket! Last Monday you left screaming on the bus because you hadn't finished the last two bites of crust from your eggy basket!"

So I made a quesadilla. I wasn't surprised for a couple of reasons. The first was the fact that Liam had quesadilla on the brain because the previous night he'd been discussing quesadillas at length. My girlfriend and I were playing Trivial Pursuit and the round pieces with pie wedges apparently looked a lot like quesadillas (P.S. I have a girlfriend now). The second reason was Liam always prefers second breakfast. Fortunately the kitchen is stocked with all the good stuff for making whatever it is that isn't what I already just made.

Luckily I always make the first breakfast just the way I like because I know I'll end up eating it. Unfortunately, on Monday, it turned out Liam didn't want quesadillas either, even though I'd cut it into six pieces instead of the usual eight in order to give it that added Trivial Pursuit appeal. He was just saying "quesadilla" because he really wanted to take the game pieces that looked like quesadillas and hide them all over the house so I could enjoy finding them for the rest of 2014. My bad.

So with the bus arriving in just minutes to take Liam away to school, where some day he'll learn the proper use of "simile" (i.e. 'I want the thing that is like a quesadilla', 'Cooking for children is as fun as eating spiders', etc.), I had to figure out a third breakfast.