The Tale of 'Shotgun' Finn

At 3:15 that morning Erin gently woke me up to tell me, "I've been having some pretty regular cramps...and I'm hungry".  This meant "get up".  I got it.  She had been having some 'cramping' here and there for a good week and a half and the day before she'd had some pretty steady cramping throughout the day.  Nothing unusual...not labor, just some good old pre-labor body getting ready for the big show.  That Friday, just two days earlier, she'd seen the doctor who'd informed her that she was 2.5 cm dilated, effacing, softening, etc. so this news of "regular cramps" was good news.  It was what we'd been waiting for and we were ready.  I got up and made her a plain breakfast.  She got a few things together that we hadn't packed yet.  We talked a bit about what she was feeling and it seemed like this was probably the real deal.  Awesome.  Now we wait...

This was our second baby.  Two years earlier Liam's birth had taken the better part of two days.  Erin began labor on a Wednesday and Liam was born early the following Friday morning.  I'd had the utmost confidence in my abilities as Erin's birthing coach going into that first birth having taken classes and written up a detailed birth plan.  We'd originally thought about using a Doula but Erin felt that it would have been a waste of money because I'd clearly shown signs of being a kick-ass birthing coach.  Surprisingly, though Erin will mercifully tell you I did "fine", the sight of her in pain turned me into a big weepy puddle of uselessness begging for drugs.  Go me.

This time I had a much simpler plan.  No major coaching or guided meditation, instead I would just be "calm and confident".  My one assignment from Erin was to discourage her from getting an epidural (the opposite of encourage).  This was good.  Erin and I had both reined in our expectations of me and simplified my role.  My new "calm and confident" mantra was first put to the test that Sunday morning about an hour after we'd woken up.  Erin had ignored her breakfast and things had seemed to intensify pretty quickly so we started timing contractions...well, not so much timing as noting that they were happening one on top of the other.  Again this was 4:15, just one hour after Erin had woken up from a "cramp".

We both knew there was absolutely no reason for concern.  Sure it was odd how fast things were progressing, but good odd.  Erin wanted this birth to be faster than the last one and she was definitely getting her wish.  But to be safe I called Erin's parents to come watch Liam and hastily packed the car while Erin stepped out onto the back deck for some air.  Once the car was packed I went to check on Erin and found her in the back yard, bent over, clutching the back of a chair.  "My water just broke".  Whoa, indeed it did.  "This is great" I calmly and confidently assured her.  "This means things are going to go fast!" (GRIN!)

I hadn't given Erin's parents any indication that they needed to hurry the fuck up but after Erin's water broke I wished I had.  Things started happening fast.  Her contractions intensified and only let up long enough for her to take two steps at a time toward the car.  She eventually made it to the front seat exhausted, legs shaking, writhing in pain, but hardly making little more noise than the occasional soft moan.  I started the engine, pulled the car into the street and waited.  It was 5:00 a.m..  Erin had been awake for less than two hours.

My in-laws live on Rockpile Road just above the Dry Creek Valley which is a good half an hour away.  I had called 45 minutes earlier and was now staring down a dark street willing headlights to appear and gripping the hand of the world's most unbelievably bad-ass woman.  She was not having a good time.  I took this opportunity to offer up more sincere reassurance.  "Erin, you were asleep just two hours ago.  I know it feels intense and things are going fast but you're not having the baby yet.  It's just not possible".  Meanwhile at that exact moment the baby was giving me the side-eye as it was most likely crowning.

15 minutes later the headlights appeared and I hit the gas.  "Drive carefully" Erin said.  I did drive carefully, just really really fast.  Erin's contractions were coming in huge waves now, peaking with her soft moans and never dying down completely.  The hospital was a good half an hour away.  I kept on the with the calm and confident reassurance that really should have earned me a punch in the wiener but Erin was miles away.  "I think the baby is a lot closer than you think" she calmly told me.  "Oh no" I thought "she must be getting nervous because that's ridiculous".  Suddenly the tension that was filling the car vanished as Erin noticeably relaxed.  Then she said something I'll never forget.  "I feel better suddenly....I feel a lot better.....I think the head is out".  I didn't have time to mentally roll my eyes at this statement because I reached over to the front of her pajama pants and felt what was most certainly, undeniably, a baby's head.

People have asked me what went through my head at that moment and it was simply this, "move your foot from the gas to the brake".  This took every ounce of will I could muster.  There was no moment of "hmm, well how about that!  I wonder what I should do next?"  The decision had already been made for me and I just needed a quick mental kick in the pants to realize that.  I skidded into the dust on the side of the road and jumped out of the car.  As I rounded the front of the car there was a small voice in my head, waaaaaay in the background, that was terrified for the safety of my child and my wife.  But in the foreground I really felt everything was going to be fine.  I had watched Liam's birth so I knew what to expect and I'd actually had some training in childbirth from my EMT days.  I kind of knew what to do.  I opened Erin's door, dropped Erin's pants, and there was the back of my baby's head.  Holy shit.

It literally took less than a minute.  I cleared the mouth, helped turn the baby a bit to get the shoulders in a good position, and waited for the next contraction.  Seconds later he was out.  A "HE!!".  "It's a boy!!" I shouted.  I gave him a few quick rubs, his color was good, and then came the cry.  Heaven.  I unwrapped his cord from around his body (no I didn't cut it) and placed him up on Erin's chest where Erin took hold of him and said, "okay, let's go to the hospital".  Seriously?  Fucking bad-ass.

I can't really remember what happened after that.  I was high.  I felt like I'd just won the lottery while skydiving.  I was shouting hysterically "I CAN'T BELIEVE THAT JUST HAPPENED, AAAAAHAHAHAHAHAHA!!!!!"  Erin, meanwhile was the picture of pure relief.  Neither of us had any fear that our son might not be okay.  He looked perfect, he was moving around, and he was cooing just enough to let Erin know he was fine.  I pulled up to the darkened front door of the maternity ward at which point Erin gently suggested I try the ER (idiot).  I circled around to the ER and calmly (and way too smugly) told them my wife had just delivered our son in our car.  They looked at me as if to say "well, what should we do?"  About 7 or 8 people descended upon my wife and bumbled around for a bit pooling their medical expertise to try and discern their assholes from their elbows.  Their greatest challenge was trying to figure out what to do with the seat belt which was looped through the baby's umbilical cord.  "Let's cut the seat belt!" they decided, while Erin gently handed the baby to a nurse, undid her seat belt, and took the baby back.

We managed to make our way up to the maternity ward where the doctors let me cut the cord so that I would feel involved in the birth.  They quickly determined the baby was totally fine but insisted we stick around for at least 12 hours for observation.  This gave us plenty of time to come up with a name which we hadn't done because we had never found out the sex.  Erin didn't want to learn the sex of the baby because she wanted to be surprised.  So let's recap Erin's wish list, she wanted it to be fast and surprising. Check and check.  She had talked about 'Finley' for months and I was sold as soon as I saw him.  So Finley Michael Bairdsmith it is.  8 lb 9 oz, 22 inches, and all natural (almost too natural) 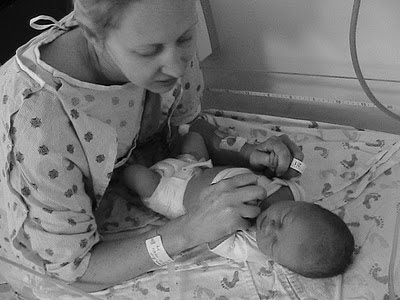