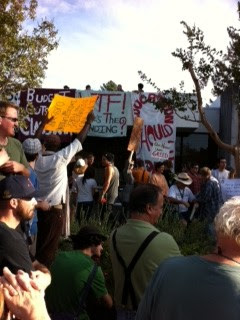 On the afternoon of October 15th I left work a little early and walked downtown to Santa Rosa's city hall, where the Occupy Santa Rosa rally was taking place. I'd spent the day before making signs (business has been sloooow), so I brought them to share with my fellow 99%. Turns out pretty much everyone there already had a sign...and they were way cooler than mine. Still, this wasn't a day to judge each other's lack of spacing and coloring skills, so no one gave me a hard time.


The turnout was fantastic - at the last count I paid any attention to, it was announced that there were about 2700 people at the rally, which I found inspiring considering bigger, fancier cities weren't always getting those numbers. In fact, Santa Rosa had the 6th highest turnout in the nation, behind New York, LA, San Francisco, Portland and Seattle. Yes - cities with populations far and beyond that of our fair little city. Give yourselves a pat on the back if you were there, because that totally rocks.

I was planning on spending the night and, as you can see from the photos below, even went home at one point to get my sleeping bag and change into my jammies. But as usual, I'd forgotten to bring a lunch to work, immediately got wrapped up in Protest Stuff so didn't grab a much-needed burrito as intended, and kinda didn't eat enough, and kinda needed to go home to sleep off all of the fun events that resulted from that blood sugar neglect. 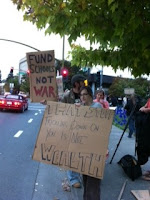 Before that, though, I got to stand on the street waving a couple of my signs. The one to the right 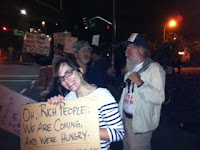 says "Oh Rich People, We Are Coming, and We're Hungry. No really, we don't have any money and we're f@%*ing hungry!" I found this to be an especially appropriate sign to carry. I'm always hungry. Since I pay for everything with cash, I often have to pass over on buying groceries so that I can pay for gas to get to work. When my kids are with me I stock up on fresh produce and healthy whatnots, but when they're with their dad, I just survive off of whatever is left. More often than not, there isn't much (since Evie eats like she's a football quarterback). I've lost a good 20 pounds since getting separated, and its not just from The Divorce Diet. Its from being freaking broke!

My favorite part about the protest was the coming-together of a community. There were people from every cultural, social and economic demographic discussing the reasons they were there representing the 99%, and the stories all carried a common thread. As a business owner, I hear the assumption that I must have plenty of money voiced fairly regularly. This is completely false. It was comforting to talk to other small business owners who are also struggling on a daily basis to keep their doors open, sometimes based solely on our love for and desire to serve our neighborhoods. As the majority (aka, the 99%), I can't express strongly enough the importance of taking care of each other by supporting our communities. Keeping our money near by shopping local and breathing life into our smaller economies will help to make larger impact overall, and in a nutshell, will make a world of difference.

And a difference is what we're trying to make - right? Let's do it.
Posted by Amanda Janik