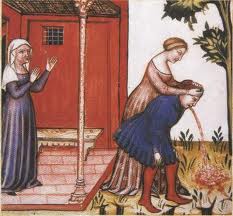 No sooner had I thought quietly in my head (so as not to jinx it) "wow, we've been pretty lucky in our health this year" did Evie get the barfs. She arrived with her brother at my place at the usual hour, holding a limp banana and informing me in a small voice that she had a tummy ache. Her dad told me he'd given her half of an antacid. I've never taken an antacid, so I assumed that was some sort of gibberish 'medicine' that he thought would make her feel better.

Over the course of the evening, the kids and I did some work on the paper chain we've been making, Evie made glitter-glue puddles on construction paper, Jonah repeatedly got a running start and then did death-defying flips into the living room chair. When bedtime came, the stomach issue seemed to be all but forgotten. I read them a book, sang them a song, said some blessings, gave some hugs, some kisses, and off they went into dreamland. Or so I thought.

I was enjoying a glass of wine while folding laundry and talking with my beau about how there are only two people in the world who are allowed to call me Panda when I heard a whimpering Evie making her way down the hall. When she rounded the corner and saw me, she puffed out a "my tummy hurts!" as I picked her up. My attempt at comforting her was interrupted by a tiny little burp, resulting in a baby spit-up sized glop of banana on my shoulder. "Okay," I thought, "that's not too bad." I started walking down the hall, ignoring my company, and clucked and cooed at my sad little muffin child.

As we crossed the bathroom threshold, she looked me straight in the eyes and then heaved an enormous amount of vomit onto my shirt, in the space between my breasts and our touching bellies. I stopped short, looking down and assessing the damage, all the while saying things like "oh, honey...you poor thing...it's okay sweetie, it's not your fault, it's okay, mommy can take care of this," etc. Things you say out loud when in your head you're saying "Holy mother of GOD! How the hell did THAT MUCH puke just come out of this small child?! And what the FUCK did she eat for dinner? Gaaah!! It's disgusting! This is horrible! HORRIBLE!!!" The things you think right before the next heave of an equally alarming amount of partially digested (later to be discovered) hamburger and fries from Flavor bistro creates Lake Puke all over your favorite long sleeved tee shirt.

When she appeared to be finished emptying the contents of her entire body onto my torso, I gently set her down and got to work peeling off our respective shirts. I'm not exaggerating when I say that mine weighed about six pounds. Hers was maybe four. I rinsed her off with a warm washcloth and walked us out into the living room where all of our clothes lay, clean and freshly folded. Newly ensconced in coziness, I bundled her into my bed and she fell into a post-barf-induced state of exhausted slumber. Until the next time she had to throw up. And the next. And yes, the next.

Eventually she was just dry heaving, but I resisted the urge to ask her for a high five. I have to say, she always made her way to the bathroom after that first time, and no beds or carpets met the same fate as my pajamas. The next morning she woke up feeling delightful, and I thought quietly in my head (so as not to jinx it), "man, I'm so glad that was just a food thing and not a flu!"

Oh shit - did I just say that?
Posted by Amanda Janik